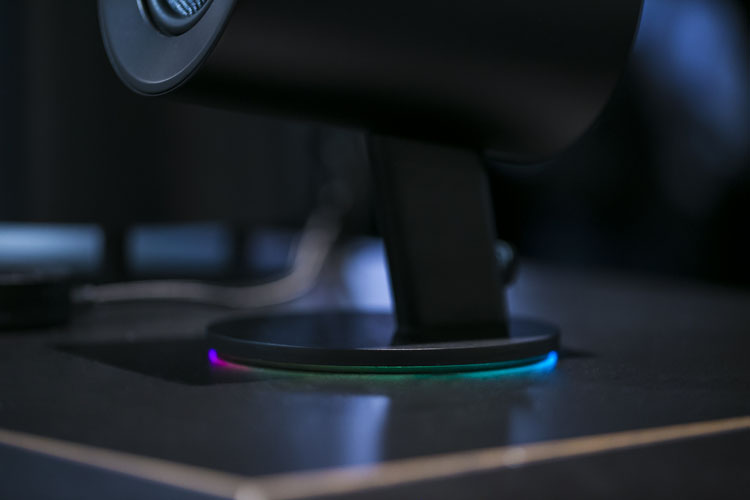 Razer is a company known for its high-powered computer gaming hardware. It prioritises performance over price. So, of course the Razer Nommo Pro gaming loudspeakers are far from cheap, but they push just about all “computer speakers” right into the shade.

Don’t confuse these with the Razer Nommo speakers, although they have some resemblance. The cheaper speakers use just two full range 75mm drivers. The Razer Nommo Pro system adds two 20mm tweeters and a 130mm downwards-firing subwoofer. These expand the sound far beyond what the standard unit can provide.

Each of the two speakers is mounted on a short stand and each points upwards slightly. That’s good for desktop placement. You want the high frequency driver firing towards your head and minimising its interactions with the desk surface. The midrange driver and tweeter are each in their own cylindrical enclosures. Unlike the standard Nommo speakers, all these are sealed. They don’t require bass reflex ports since the subwoofer handles all the deep stuff.

At the base of each of these speakers is a ring of lights. These can be controlled using the Razer Synapse software on your computer. The speakers are “Razer Chroma enabled” so that the lighting can work in conjunction with other Razer hardware, and also with Philips Hue lighting.

The subwoofer of the Razer Nommo Pro is a slightly unusual beast. It also is cylindrical, but it sits on its end. The driver is a 130mm unit with a foam roll surround. In general, I’d prefer a rubber roll surround because in some humid climates foam can perish more quickly. (But we’re talking years, so don’t worry too much.) This enclosure stands 390mm tall and is 275mm in diameter. It’s bass reflex loaded. The port is on the top, with the tube extending most of the way to the bottom. Some kind of net at its end should stop dropped objects from getting too far inside and rattling around. Upending the subwoofer should tip such items out again. That won’t protect things from fluids. Reasonable care is warranted.

It looks like the amplifiers are built into the subwoofer. Razer doesn’t mention a power rating. Also on the back is a power socket, a USB-B connection for your computer, a socket for the control puck, and an optical digital audio input. An optical cable is included, as is a USB cable for connecting the system to a computer.

The control puck has an outer ring for controlling the volume, an input selection button and an on/standby key. It also has a 3.5mm headphone output and a 3.5mm analogue audio input. A 3.5mm input cable is provided in the package.

Installation of the Razer Nommo Pro

Plugging everything in on the Razer Nommo Pro was straightforward, except that the holes to accommodate the speaker plugs were a tight fit. Everything was clearly labelled. The speaker cables are about two metres long. You won’t need anything like that length if you’re putting them on your desktop to either side of your monitor, but the flexibility allows you to install the speakers elsewhere in your room. Indeed, I did much of the testing with the speakers on stands in the place where I normally have my ($2,000+) high fidelity loudspeakers. I put the subwoofer between them.

In that position I used them both driven by a computer and by a turntable.

On plugging it into the computer, the Razer Synapse installer program fired up. This asked whether I wanted to install said Synapse. I did. It fell over a couple of times during the 233MB download, saying that the server was unavailable, but when I clicked to resume, it just kept on going from where it had left off, rather than restarting.

This lets you do all the usual control stuff that gaming software normally provides. In particularly, you can control the lights.

But most importantly, you can also set the subwoofer level. By default, I found it a bit too hot. There’s no apparent way to adjust it without the software on your computer. With the software you can also choose from several sound modes. The default is THX, which produces the tonal balance preferred by THX. There’s also a Dolby mode, with Game, Movie and Music modes. And there’s a graphic equaliser as well, so you can choose your own tonal balance.

If you’re listening to something plugged into, say, the auxiliary input, the Synapse software remains operative on the plugged-in computer. You can no longer control the overall level through the app, but you can still do such things as change listening mode and adjust the bass level.

What do you want from speakers designed for gaming? I’d want impact. And that’s what these speakers deliver. Look, even with them located in my hifi speaker location, they were quite capable of producing sound in the mid-90 decibels cleanly, without marked distortion, at my listening position around 2.5 metres away. In case you’re wondering, that’s quite loud.

On my desk they aren’t 2.5 metres away. They’re 0.8 metres from my head when they’re sitting either side of my 32-inch main monitor. I had them peaking at 100 decibels, cleanly, in that position. In case you’re wondering, that’s very loud. I wouldn’t recommend running the speakers at that level for too long. Oh, they can take it. But it’d be very bad for your hearing.

Are they super smooth high-fidelity loud speakers? Well, initially I was rather underwhelmed with this system when it came to music. They went loud and clean and clearly offered a broad frequency range. But they were a bit lumpy, bass-heavy and lacked detail, particularly in the upper midrange.

But it turned out that I could easily make them sound much, much better. The default audio setting was to have “THX” mode switched on. The people at “THX” have very particular tastes when it comes to sound and picture quality. A few years ago, Panasonic had a number of high end TVs with a “THX” picture mode. I always thought they had a weird colour caste and were quite unrealistic.

Anyway, for music listening with the Razer Nommo Pro it’s best to use the app to switch to a different audio mode. I’d recommend clicking on the graphic equaliser button, and then within that clicking on the “Custom” button. That zeros out all the EQ sliders. Then drag down the “Bass Boost” slider to something you find satisfying.

Those changes provide a fairly accurate sound with music and is far better than the THX setting. Use that for games if you like. With games it delivers brilliant impact. For music, go with the even EQ. Or at least start from there and do some tweaking.

Finally, there’s a 3.5mm headphone output on the puck. This was fairly low in output, so to use it you’ll need quite sensitive earphones or headphones. To have satisfying music levels with the Blue Ella headphones, the volume control on the puck needed to be turned up to the maximum level.

The one real question I had regarding the performance of the Razer Nommo Pro speakers concerned bass. Namely, how deep does it go? Razer says 35 hertz but doesn’t specify the level. That’s a common dodge to make things look better than they are.

The output from the driver was from around 50 hertz to 120 hertz within a plus or minus 3 decibel band (ignoring a couple of sharp spikes). At the port, the output was from 28 to 70 hertz, plus or minus 3dB. If anything, Razer has been modest.

The most accurate bass balance was with the “Bass Boost” control in the app set to about 30 or 40 on the scale of 100, rather than the default of 50. I suspect that most will be very happy with the 50 setting, though. It does deliver considerable heft to the performance.

When I measured the output on the tweeter axis at a distance of one metre, there were a series of peaks and troughs in the high frequencies above about 5kHz. That suggests to me that when Razer says that the 75mm driver is “full range”, they mean it. That is, unlike most high-fidelity loudspeakers, it seems that no low pass filter has been applied to that driver, so both the tweeter and the midrange are producing the treble. That leads to interference, sometimes adding, sometimes subtracting, to the overall output. The amounts differ according to frequency, distance from the speaker and vertical angle.

Of course, the Razer Nommo Pro acts as a USB Audio device when plugged into a computer. So, will it do high definition audio? No. It works only at 16 bits and 48kHz sampling. Which means that both CD-standard audio (16 bits, 44.1kHz) and high-resolution audio will be resampled by the computer to be fed to this speaker system. I can’t say that sound suffered for this.

The Bluetooth connection did not support any of the higher quality codecs such as aptX or AAC, so SBC it was.

The Razer Nommo Pro speaker system is designed for gamers, and it will positively thrill gamers. It has impact, power and a wide range. Change the settings, and it’s pretty good for music too. It can even perform duty as a home audio speaker system.

Features
Value for money
Performance
Ease of use
Design
High impact sound for gaming
Extended and strong bass
Good sound with music
Able to be used as room music system
Must be connected to computer to adjust many things
4.4