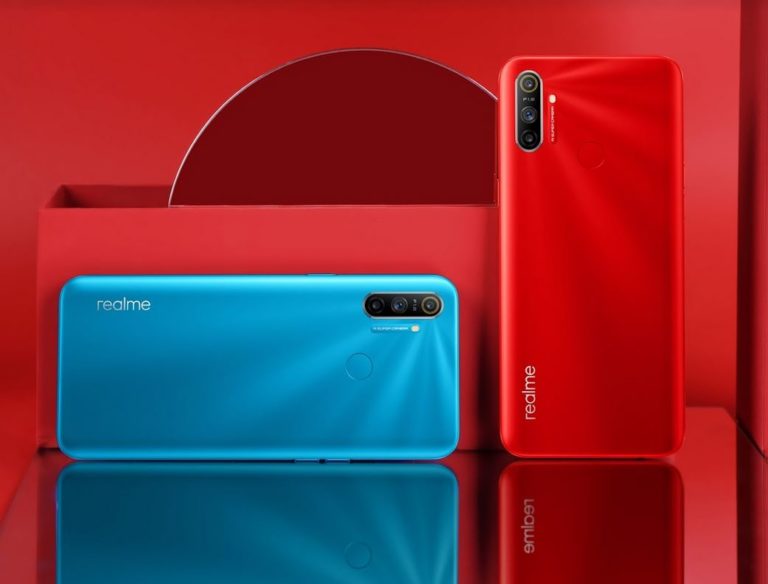 The realme C3 is the latest in its entry-level C-series following the $199 C2 ‘Value King’.

We were impressed with realme’s phones when launched late last year. OPPO makes the realme C3 so you know it is good quality.

Unfortunately, the realme C3 is launching in a time of world chaos. It is not just that COVID-19 has for want of a better word neutered Chinese production facilities but that the uncertain component supply chain smashed any certainty that it can get the bits to make it.

Regardless the realme C3 will launch in limited quantities on 9 April and be available online only from realme e-store Australia, JB Hi-Fi online, Make It Mine, 5GWorld, Essential Appliance Rentals, Amazon realme store, eBay realme store, and Catch.com.au.

Note that the review unit is a pre-production model and specifications may vary slightly.

Caution: The Australian model differs from international ones in that it has a different processor (MT6769), NFC, macro lens, and certification for Australian LTE Bands.

It certainly does not look like a cheap phone. Sure it has micro-USB charging and that ever-elusive 3.5mm combo audio port but the screen, fit and finish belie its price.

The review unit is Frozen Blue which is a vibrant, textured metallic-like finish (the other option is Blazing Red) with a huge colourful 6.52″ display, a MediaTek MT6769 processor, triple rear camera, BT 5.0, NFC, dual sim, a whopping 5000mAh battery and Android 10.

That is a terrific package even if the Aussie dollar has knocked it around a little.

We use the terms FAIL, PASS and EXCEED against test paradigms relevant to this mass-market device.

GG3 Plus is a new variant of the highly scratch-resistant GG3 adding improved drop protection surviving a .8m (waist height) drop onto a hard or rough surface.

It claims 480 nits, 800:1 contrast and almost 100% of sRGB (sorry our test equipment in COVID lockup). So, it is web-colour accurate. It has a screen colour temperature slider and supports Android 10  Dark Mode interface that I kind of like. It is moderately daylight readable.

It comes with a pre-fitted plastic screen protector.

Performance-wise it achieves 388/1242 (single/multi-core) on GeekBench 5. That puts it on par with Samsung Galaxy Note 8 – not too shoddy.

The Mail G52 MC2 GPU supports video encoding up to H.265 and decoding of VP-9 (YouTube). Geekbench Compute score is 1010, so it will play most typical mobile games.

RAM is 3GB LPDDR4. This is the new fast RAM, but we consider 3GB the bare minimum for full Android. Still, it does not lag at all in loading apps.

Signal strength is -104dBm (reasonable), but it also found the next nearest two towers (good) showing the antenna setup is fine for city and town use. It supports VoLTE and VoWi-Fi on all Telco networks.

It is Wi-Fi 4 N reaching a maximum rate of 86Mbps  with a good strong signal strength of -34dBm.

BT 5.0 is a nice touch, and it supports SBC and AAC codecs.

The Australian model has NFC.

The Goodix fingerprint reader is consistently accurate. It also has face unlock – stick to the fingerprint sensor!

It has an earpiece speaker and a bottom-firing mono speaker. We don’t expect any fidelity from a mono speaker, so it is not a test paradigm.

No buds are supplied – you need a pair for the aerial for the FM radio. But it appears you can redeem a free set of wireless buds if you register.

Yes, we know its plastic (well polycarbonate), but realme have such a great way with vacuum-deposited metallised paint that you would swear it is metal. We like the ‘Sunrise ‘design.

Paint, however, will wear faster than metal. There is no bumper case.

It runs Android 10 and the new realme UI V1.0 user interface. realme were using the OPPO ColorOS, and you can see a familial resemblance.

Google apps and its versions of calendar, mail, camera, clone phone (very effective) and more are preloaded. The only bloatware is Facebook.

Now at this price, you can’t expect OS upgrades, but realme is pretty good with rolling out security patches.

Battery – EXCEED, but USB-C would have been nice

5000mAh is enough to get you through two to three days – more if you remember to power down at night or use aeroplane mode. Amperage draw when idle is <200mA so the battery should stretch to a month on standby.

The 5V/2A (10W) charger supplied will go from 0-100% in about three hours (if switched off) and five hours when left on. It will also charge from a 5V/.9A USB port and that can take several hours. But it means you can get a top-up charge almost anywhere.

This outperforms most cheap smartphone cameras in spades.

The rear tri-camera is

There is a single auto flash (good to about 3 metres) and auto HDR. It does not have OIS or EIS.

The lenses are optical plastic under a glass protector to save costs.

There is a ChromaBoost setting that stacks images and saturates the colours – they may not be technically accurate, but that is what most of us want.

The front camera is

We give you the specs because they tell us what the hardware is capable of. But realme puts a lot of work into the camera, and the MediaTek SoC has some AI capability. That produces a camera that has object recognition (Google Lens), smart photo album, scene detection and segmentation with background removal, and depth of field capture enhancements.

Overall, it is one of the better mass-market cameras producing surprisingly good images in daylight to low light, although it does not have a dedicated Nightscape mode.

It is hard to get excited over mass-market phones, but this one did interest me. The tri-camera is way better than it should be, a powerful class processor, a massive battery and overall, the quality you expect from an OPPO built phone.

It is not a replacement for the C2 value king – its very different and adds considerable value and a little cost to that.

After I reviewed this, I read a few international reviews – hence my warning to buy the genuine model. We get a better processor, tri-camera and 64GB at launch.

realme C3 RMX2020
Features
9
Value for money
9
Performance
9
Ease of Use
9
Design
9
Positives
Great value for a 5000mAh battery and tri-camera
Good looks, well-made and well-supported
Passes or exceeds every parameter for a mass-market phone
Negatives
Micro-USB but that is not a deal-breaker
9