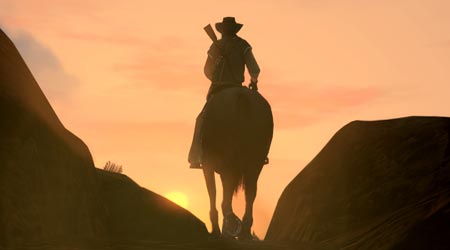 Another magnum opus from Rockstar, creators of the legendary Grand Theft Auto games, Red Dead Redemption is, at its most basic, GTA in the Wild West. But my lazy description is doing the game a disservice, because as soon as you pull your cowboy boots on and enter this new, free-roaming adventure, Rockstar’s extraordinary achievement is immediately apparent.

Employing a similar overarching but muted narrative that its urban cousin espouses, Red Dead Redemption is a simple tale of retribution layered with task-oriented relationship building, decision-making and petty diversion which plays out in a massive Western-themed environment that is entrancing at the same time as feeling authentic. It may not be, of course, but the game exudes the same sense of accuracy as HBO’s Deadwood TV show, with superb, quite superlative, voiceover work in the game, both very natural-sounding and entertaining.

The skeleton of GTA IV is very visible here:  the same graphical look, same story segueways while driving (in this case, while trotting along on horseback), same “go here, fetch that, shoot bad guys on the way” gameplay, but the change of theme and the pure escapist fantasy that playing the game provides is enough to dispel concerns that the game is just GTA in a different outfit.

The only real criticism we can levy at Red Dead Redemption is that the very loose nature of the narrative – meaning that there’s no strong ‘invisible’ force pushing the gamer along to make progress, as you find in more restricted games – means that, once you stop play and re-enter the real world for a while, the impulse to return isn’t very strong. Undoubtedly, once you pick up the controller and immerse yourself in the game again, you’ll be as entertained and enthralled as before.

Max Everingham is the owner of Game State, a B2B videogame software analysis & marketing consultancy. Max is a videogames veteran, having worked in the industry since 1996, including senior brand & product marketing positions at EA and Codemasters.
Overall
Reader Rating0 Votes
4