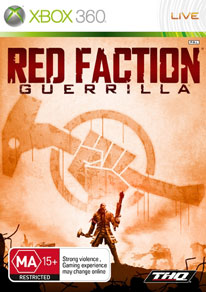 An action shooter game with guerrilla warfare as its central theme, Red Faction: Guerrilla is a bit of a surprise. While it starts off pretty slowly and is probably one of the stingiest games we’ve encountered for some time when it comes to rewarding the player’s actions, it is nevertheless very fun to play in parts.

With a storyline centered on a small mining community based on Mars, relayed to the player through mission briefings and little else, the game has superb graphics with some very impressive lighting effects, including a quite mesmerising red sheen on the hardy vehicles you drive around. The terrain looks suitably Mars-like, with a large area to explore as you go about your business fighting back against the incumbent ‘Earth Defense Force’ soldiers who have outstayed their welcome and turned to terrorising the inhabitants of the mining community your character joins at the start of the game.

Thematically, Red Faction: Guerrilla is a real success: besides the game’s great looks, the clusters of buildings that comprise the mining communities, the battered, planet-worn vehicles and the meaty array of weaponry at your disposal all look the part, fashioned out of sturdy metals, rough and worn around the edges and generally reminiscent of the kind of raw, hardy equipment that a mining exploration endeavour would need.

The various trucks, buggies and more imaginatively-designed conveyances are wonderfully modelled and detailed, giving you access to a very convincing fleet of exploratory vehicles and making you eager to uncover more of the map in the hope of encountering new designs. As an ‘open-world’ game – a game that allows the player to pretty much go where they want, when they want, choosing their own path to get there – Red Faction: Guerrilla strikes the right note, although it’s all perhaps a little soulless and barren, not quite as populated with activity as it could be.

The point of the exercise in the game is to smash and blow stuff up. There’s that story we mentioned, of course, which tries to justify all the mayhem, but basically you’re tasked with wreaking as much destruction as humanly possible, to discourage and eventually dispel the dastardly EDF troops from each area you uncover. Starting off with a bloody great sledgehammer in hand, a rifle on your back and the ability to lob a limpet mine at structures to detonate at your leisure, there’s a good upgrade tree to beef up your weapons but it’s based on collecting salvage, the fruits of your destructive labour, and that salvage is doled out in very meager portions indeed, making the path to upgrades extremely slow and laborious. The player isn’t rewarded frequently enough and this quickly becomes demotivating, making it all feel far too much like hard work to progress in the game.

Coupled with the quite dull and alarmingly plentiful side missions, the temptation to forge right ahead going from one mission objective to another to push the story along in the hope that you’ll get some sense of accomplishment is strong. However, apart from the fleeting juvenile delight in the levels of destruction you can wreak, that sense of accomplishment is largely absent, even as you eke out some progress and get those elusive upgrades.

Built around a very robust ‘physics engine’ that sees the buildings, for the most part, behave like real-life structures in the manner in which they fall to your heroic efforts, it can be deeply satisfying to place your explosives on, or fire projectiles into, an enemy installation at exactly the right place and then watch it all crumble to dust. But there’s a problem here, and that’s how the game handles the regeneration of enemy units – or ‘respawning’. In short, as soon as you start an attack, it chucks endless numbers of them at your player, on foot and in vehicles, replacing them as soon as they fall until you’re either completely overwhelmed and die (you die a lot in this game) or you decide to flee. There’s a third option, which is to be as gung-ho as an old Rambo movie and hope to survive the relentless enemy onslaught, but this more often than not leads to a very quick demise and mission restart.

Damage is not always persistent, either, especially when you need it to be – there are some objectives involving destroying key installations that magically repair themselves if your character dies and you restart. Which, as we mentioned, you’ll be doing frequently. That, the constant respawning of enemies, and ‘resetting’ of missions if you fail them, plays against the attempts to portray a credible planetary exploration and mining community, continually reminding you that you’re not simply in a game, but in a game that is going to throw wave after wave of minions at you until you either give in or miraculously blunder your way through to mission completion. So arbitrary do some of the design decisions in Red Faction: Guerrilla render the challenges that you more often fulfill the conditions for mission success by accident than design.

So Red Faction: Guerrilla is not the most atmospheric (sorry) game around, failing to portray your fellow freedom fighters – or even your own character – with the requisite warmth or appeal that would make you care about what happens to them or their communities, but it can be a lot of fun in short bursts. The next game in the series, if it gets a huge personality injection and faster upgrades, will be a contender for open-world action game of the year.