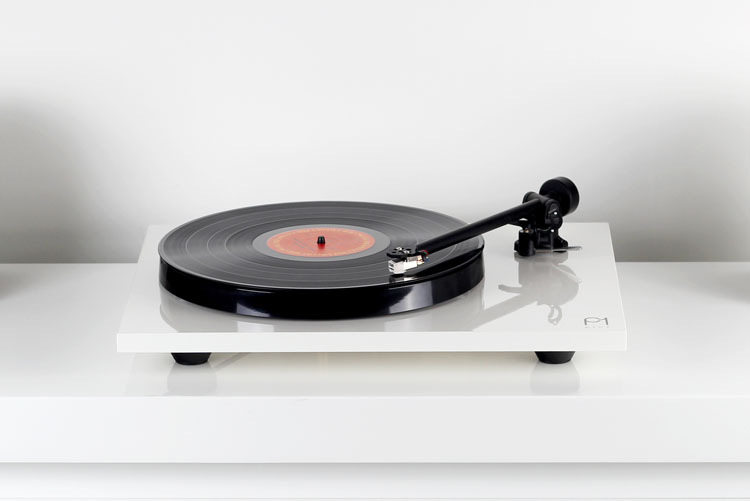 We all know that turntables, and the vinyl discs that they play, are making a comeback. But most turntables have special requirements for amplifiers. That’s where this variation of Rega’s entry-level turntable comes in useful. You can plug the Rega Planar 1 Plus turntable into just about anything and it’s right to go.

Turntables generate the audio signal by putting a diamond stylus into a groove in the record. The groove has wobbles, so as the disc rotates the stylus moves side to side and up and down. It is attached to magnet inside the body of the cartridge. So, the magnet moves. Around the magnet is a system of coils. A small electrical signal is therefore generated in the coils. And, so, you have something for an amplifier to amplify.

But there are two problems with this signal. First, it is at an extremely low level. A CD player typically has an output of up to two volts (at 0dB FS). A moving magnet turntable cartridge typically has an output of something like 2.5 to 5 millivolts (at 1kHz at 5cm/sec modulation). That’s roughly one five hundredth of the output of a CD player. Plug that into a regular line input on powered speakers or an amplifier, and you may hear a weak sound if you turn it up to the maximum.

And even if you could, it would sound terrible. That’s because when a vinyl record is “cut”, the bass is reduced by around twenty decibels, and the treble is boosted by around twenty decibels. That’s the “RIAA Equalisation”. There are technical reasons for why this is necessary, but rest assured that it (or something similar) applies to all vinyl records release in the last sixty-five years.

That’s why some amplifiers have a “phono” input. This boosts the signal an enormous amount (typically around 40dB gain). And they have an RIAA Equalisation curve built in, which cuts the treble and boosts the bass.

But you don’t need a phono input with the Rega Planar 1 Plus turntable. It has the phono pre-amplifier built in. Indeed, the phono pre-amp is based on Rega’s Fono Mini A2D (which we reviewed here), although with the USB output removed. (Also available is the standard Rega Planar 1 – priced at $549 – which comes without the pre-amp).

And that means you can plug it into just about anything with analogue audio inputs. I did a fair bit of my listening with the Rega Planar 1 Plus turntable using the high-end KEF LSX powered speakers (reviewed here). And they most certainly do not have a phono input.

A weakness of the Rega Planar 1 Plus turntable is that phono pre-amp cannot be bypassed. If you purchase it and then later upgrade your electronics to something including a high-quality phono pre-amplifier, you won’t be able to use that input.

Rega, which is based in the UK, is most famous for the glass platters of its turntables. But you have to go up a level to the Rega Planar 2 (reviewed here) for one of those. In this model the platter is “phenolic”. That is, a type of phenolic resin. And that’s a kind of “synthetic polymer” according to Wikipedia. It looks a little like plastic, but it’s heavier and more akin to the Bakelite used in old-fashioned telephones.

The platter is rotated by means of a belt which links to a 24-volt synchronous AC motor. There are two diameters to the pulley attached to the motor spindle. To change between 33 1/3 rpm and 45 rpm you lift the platter and manually move the belt from one groove of the pulley to the other.

The plinth – the main body of the turntable – is laminated in a fine looking gloss. The review unit was black, but white is also available.

The tonearm is one of Rega’s manufacture: the RB110. This is designed to be “Plug and Play”. The Rega Carbon cartridge is pre-attached. As we’ll see, it is very easy to set up. The downside of this is that it would be difficult to upgrade the cartridge to anything that does not precisely match its weight and required tracking pressure (2 to 3 grams).

That said, setting up turntables can be a tricky, technical business. The design of the Rega Planar 1 Plus gets rid of all that complication.

The tonearm incorporates damped cueing, so you can flick the lever and the stylus lowers gently to the vinyl surface. It also has a clip to hold the arm securely if you’re moving the turntable. The electronics are switched on only when the motor is switched on (you use a switch under the front right corner of the plinth for this). Switch the motor off and you can carefully brush the stylus clean without horrendous noise emerging from your speakers. The stylus of the Rega Carbon cartridge is user-replaceable (cost: $40).

The Rega Planar 1 Plus turntable also comes with a Perspex lid. This is a full-sized turntable. The lid closes with a record on the platter. With the lid closed, it measures 447mm wide, 360mm deep and 117mm tall, and it weighs 4.35 kilograms. Because of the way the lid is hinged, you’ll need a shelf depth of around 425mm and a height of around 405mm.

Setting up the Rega Planar 1 Plus turntable

It really couldn’t be easier. You pull out the unit from its box. The platter is already on the subplatter with the belt in place on the 33rpm pulley. Then you pop the felt mat onto the platter.

You add the counterweight by pushing it onto the back of the tonearm, sliding it down as far as it will go. I checked the stylus pressure when I’d done that. It came in at 2.46 grams. The specifications for the Rega Carbon cartridge recommend a tracking pressure of between 2 and 3 grams, so that was pretty much right. If you want to experiment with a slightly lower pressure, you can slide the weight back out by up to a millimetre. I wouldn’t recommend doing that unless you can weigh the result. Too low a pressure can lead to all kinds of problems.

A couple of tabs on the back of Perspex cover slide into slots on the body of the turntable. Plug in the power and the output and its done.

There is no adjustment for anti-skating on the Rega Planar 1 Plus turntable. The manual says that the “RB110 tonearm is preset for bias adjustment, so no other set-up is required.”

And you know what? Rega was right. I pulled out a test record with a trackless (that is, smooth) band and lowered the tone arm onto it. Without a mechanism to overcome the bias resulting from the forces on the stylus, the arm would rapidly scoot in towards the centre of the record. But it didn’t. Well done. That minimises wear on the record.

In addition to the KEF LSX speakers, I used it with a Denon AVR-X3500H home theatre receiver. The Denon has a phono input built in, so I plugged this turntable into the CD input. I left my own turntable – the Rega Planar 3 (reviewed here) – plugged into the phono input. Despite this, you can’t really do A/B testing with vinyl. The levels were different, and moving the record from one turntable to the other took two long.

(Use two copies of the same recording? Sorry, surface noise will be different between them, regardless of the turntables used.)

I ran through quite a few recordings, starting with a recent re-pressing of Prince’s 1999. This quirky breakthrough album was very nicely rendered by the turntable. The sound was tight and coherent, and the bass quite strong, albeit a little lumpier and less focused than with the same album on my turntable. The inevitable clicks and pops were perhaps a touch louder than I was used to, but weren’t especially intrusive.

Switching to Laura Marling’s Short Movies, this close-miked, acoustic performance carried through her distinctive vocal delivery (clearly, pressed hard against the microphone, leading to a slight overload). The atmospheric instrumentation swirled around the sound stage pleasingly, while the percussion hit with punch.

So, that’s with expensive new pressings. What about some old stuff? I pulled out an album I’ve owned for at least forty years: Richard Strauss’ Also Sprach Zarathustra, performed by the Berlin Philharmonic led by Karl Böhm. This opens with a sustained organ pedal which is a challenge for vinyl. But the turntable managed to extract what there was of it and bring it to the amplifier. More impressive was a few seconds in, when the music reached the peals of tympani. The bite on these was excellent, suggesting respectable transient performance and good coherence across the frequency range.

The massed strings were also delivered smoothly, without marked stridency or harshness.

There was no audible turntable rumble from the Rega Planar 1 Plus turntable, nor were there any apparent tracking problems with the recordings I used.

Yes, there are low cost turntables around with built-in phono pre-amps. The Rega Planar 1 Plus is clearly far from inexpensive (although it is entry level for Rega). But it provides very strong performance, and just as importantly it will preserve the quality of your vinyl recordings. Some of the lower cost options will simply chew them up over time.

Its only weakness, really, is the lack of an upgrade path, given that you can’t switch to an external phono pre-amp, nor can you (realistically) upgrade the cartridge. But if you’re not planning on going further in your journey with vinyl, this turntable is an excellent place at which to rest.

Rega’s home page for this turntable is here.