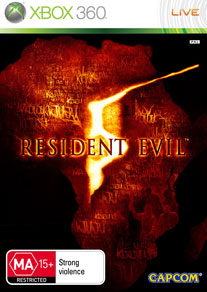 For a game that many fans say invented the ‘survival horror’ genre – it didn’t, but it did at least coin the phrase – it’s interesting and a little disappointing that the latest in the Resident Evil series is a lot less about survival horror this year and a lot more about rampage horror. Perhaps this disappointment is because the first game, which made its debut on PlayStation in 1996, created an extraordinarily tense atmosphere, where you really felt trapped and outnumbered and it really felt like you were always on the brink of a horrible, messy death, constantly fighting for survival. It may also be because the first games in the series were heavily oriented towards adventuring; finding keys, solving puzzles and managing your inventory and, in particular, ammunition.

But, of course, Resident Evil has always been about killing zombies. And that common thread remains in this latest incarnation, with the viral infection doing its dirty deeds out in Africa this time, resulting in your character being relentlessly attacked by hordes of infected and extremely crazed village inhabitants. And we do mean ‘relentlessly’, because the most apparent change this year has been the obvious intent from the development team to make the game much more ‘run and gun’, with the emphasis squarely on action game play and grisly outcomes. Despite accusations from some that the enemies, called ‘Majini’ in the game are stereotypically or otherwise harshly depicted, comments that speak more to interests of self-promotion than intelligent discussion, both the setting and the premise of Resident Evil 5 make this outing equally threatening as previous instalments – and therefore enjoyable for this genre.

The game looks gorgeous – the environments are lush and immersive, with characters drawn (or built) and animated with eye-popping attention to detail. There are few games that achieve the visual splendour on display here, so it’s a shame that the ghosts of Resident Evils past come back to haunt, and seriously detract from, the enjoyment of the game. Stubbornly sticking to the ‘thou shalt not wield a weapon and move at the same time’ commandment laid down by the Resident Evil designers in the first outing, spurious ‘real-life’ rationale apart, is both nonsensical and incredibly frustrating, exacerbated by the new emphasis on action and the faster pace demanded throughout (there’s even an in-game reward for completing the entire game in under five hours).

It’s even more mystifying given that Dead Space, a competitor out late last year, achieved the apparently impossible by allowing you to wield a weapon, walk and – gasp! – fire all at the same time, to the very great benefit of the survival horror genre. The outdated inventory system, with limited ‘slots’ for your weapons and items also works against the new action-oriented pace.

It’s still a great game. There’s enough ‘legacy’ stuff added to the shiny, new coat that any fan of the previous games will love Resident Evil 5 and the new co-op mode is the best – the only – way to play. But while it has benefitted from a spit and polish in the graphics department, the game play has remained resolutely static, with the result that competitor titles, such as Left 4 Dead with its brilliant, adaptive AI, and Dead Space, with its control mechanics and immersive atmosphere have outpaced it and, well, left Resident Evil 4 dead.

This review was conducted on the Xbox 360 games console. Resident Evil 5 is also available for PlayStation 3.