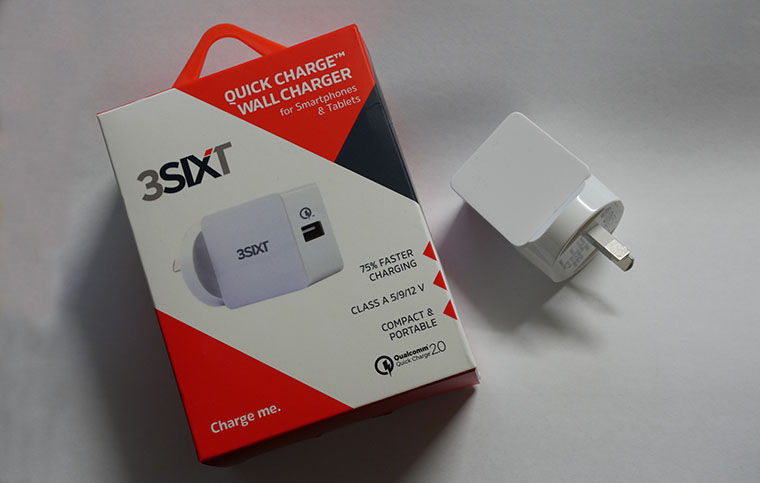 Somehow my office has become increasingly filled with USB power adaptors. A lot of them are from the kids’ old phones. As those phones have made their separate ways to the great home for cracked-screen phones in the sky, their former power supplies have ended up in my office.

So why would I ask 3SIXT to send me a Quick Charge Waller Charger? Why add another USB power supply to my collection?

Let’s go back a bit. My iPhone 4 and my original model iPad, both from five or six years ago, had what looked at first glance to be identical chargers. But if I plugged the iPad into the iPhone’s charger, the iPad would tell me that this was going to take a long time, and it would proceed at a trickle. By peering closely at the fine print on each charger, one could see the real difference between them: while both were rated at five volts, the iPhone charger was rated at 1 amp output and the iPad charger at 2 amps.

Things were so simple back then. One voltage, two capacities. These days a USB charger is called to deliver so much more, both in power and versatility. Because chargers are no longer dumb devices that simply offer up a fixed amount of power, take it or leave it. Now they negotiate with the device they’re charging and, between them, decide how much power they’re going to deliver.

Which means it can deliver up to 2.0 amps at five volts, up to 1.67 amps at nine volts, or up to 1.25 amps at 12 volts. You can see why the charger and the device being charged need to negotiate. (Version 3.0 adds support for 20 volts output, suitable for notebook computers.)

“Qualcomm” might be a familiar word to readers. Think Qualcomm Snapdragon. The Quick Charge system is implemented in many Snapdragon processors, probably most since 2015 for version 2.0. But not necessarily non-Snapdragon ones. So the charge speed you get will depend on your device.

The 3SIXT Quick Charge Waller Charger has the standard Australian two pin power plug solidly moulded into one end – it’s not a clip on – and at the other is a USB Type-A socket. That’s nice. One major brand of phone puts its USB socket on the side of its plugs, and I find I’m always moving plugs around on power boards to find a way to accommodate it.

Perhaps. The Samsung’s power adaptor is for some reason named “Travel Adapter” (even though you’ll mostly be using it at home) and although it doesn’t carry the Qualcomm Quick Charge logo, it is rated at 2.0 amps output for five volts, and 1.67 amps output for nine volts. Twelve volts isn’t mentioned.

I thought about using other phones, but the ones I had available were from Oppo and Huawei. Both of these support fast charging, but have their own named systems for that. Indeed, the Huawei charger also apparently has three modes, but they are 2.0 amps at 5 volts, 5.0 amps at 4.5 volts, or 4.5 amps at 5 volts. The Oppo charger says it can deliver 5 amps at 5 volts.

I mention those just to show how different the fast charge systems can be.

So back to the Samsung Galaxy S7. First, to establish a base line, I ran the battery down a long way and then charged it up using an older Samsung 1 amp, five volt adaptor and a standard cable. To get from 16% to 93% charge, it took just over one hour and 58 minutes. Let’s turn that into an form suitable for comparison: 15 minutes and 20 seconds for ten per cent of charge, on average.

Note that it is an average. Fast charge systems in particular typically pour in energy at a higher rate when the battery is mostly empty than when it is full.

Using the 3SIXT charger, I refilled the Samsung phone from 34% to 93% in 57 minutes and 43 seconds. That works out at 8 minutes and 53 seconds per ten per cent of charge, on average.

Then I realised I’d not followed the instructions precisely. 3SIXT says that you should use the cable that came with your phone, or a special high power one supplied by it. I’d asked for a USB Type-C cable, but not for a Micro-B USB cable, which is what is needed for the S7. So I’d used a high power cable from an Oppo device. But on discovering that the charger for said Oppo device was five volts only (albeit at up to five amps), I decided to redo it.

This time I ran the Samsung phone down to completely empty and charged it up from 0% using the 3SIXT charger and the cable supplied with the phone. At 1% I powered the phone back on so it didn’t get an unfair advantage from a lack of power draw with normal operations.

Overall, the time per 10% was eight minutes and 51 seconds, so it seems the Oppo cable was okay after all. Again there was a definite slowing down as the battery neared full charge. The final 3% proceeded at a rate of 32:37/10% while up to around 80% the rate was mostly under seven minutes per 10%.

All of which means: even the Australian version of a Samsung Galaxy S7 will charge fast with the 3SIXT Quick Charge Wall Charger. Flat as a tack, the S7 got to 5% in less than four minutes and was at 49% in less than 34 minutes. And three quarters full around 52 minutes in.

That last little bit takes longer, but that’s unavoidable with any charging system.