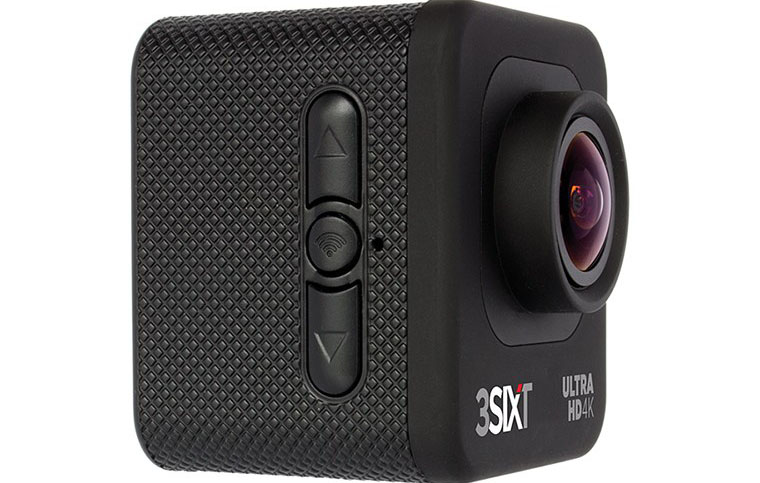 Let us, before we do anything, pause for a moment and look at two numbers. The 3SIXT Ultra HD WiFi Sports Action Camera features, as the name indicates, offers Ultra High Definition video recording, which is to say up to 3840 by 1920 pixels of resolution at 24 frames per second. The second number? $179.95. It’s almost unbelievable that you can pay such a small amount for a gadget that, a decade ago, would not have been available to a billionaire.

This is a tiny, tiny action camera. More or less cubical, it measures only 48mm on the longest dimension, and 43mm on the other two and just has a mass of just 71 grams. At least, they’re the figures for the camera alone. In practice, you’ll be using it with some of its accessories attached.

And it features WiFi communications for viewing through the device with an Android or iOS smart phone or tablet, or for downloading the video and photos.

Now, of course an action camera is only useful if you can take it with you or attach it to you or your equipment so that it can record what’s happening. A sub-two inch cube is easy enough to take with you, but attaching it to things? Not so easy.

Except that the Sports Action Camera comes with a full range of attachments. The most obvious is the one in which it is installed in the box: the waterproof housing. This comes with a spare door in case the sealing starts to leak, and has three push-through buttons to allow control of the camera. If you’re not going underwater – or venturing out in the rain – there’s a more skeletal housing that leaves all the various controls and connections clear for use. Either of these can attach to a number of supplied mounts, including for attaching to a helmet, to bicycle handlebars, or even to flat surfaces. There are sticky pads and cable ties. The non-waterproof housing has quarter inch tripod-ready mounting holes at both top and bottom. There’s even a suction cap mount for windscreens.

The main connections are the slot for holding a microSD card (which you supply – Class 10 required for UltraHD recording) of up to 32GB, a mini HDMI output and a Micro-B USB socket for charging. The whole thing gets by handily with just five control buttons. A 38mm screen on the back gives you some chance to frame things correctly and shows the main menu, as well as allowing you to display photos and video.

The camera has a very wide 170 degree field of view. The Lithium Ion battery holds a touch over a 1000 milliamp-hours of charge. It takes three hours to charge and is rated for 90 minutes of operation.

A small quick start manual is included, but you can download a more comprehensive one from the 3SIXT website.

In general a lot of gadgets are kind of hobbled. The basic chipset might provide all manner of settings and functions, but many of them are switched off or just not implemented. On one view, that’s in order to keep things easy to use for the consumer, to avoid too many choices leaving a consumer frustrated with complexity.  On another view, it might allow several different models based on the same control electronics to be provided, with features unlocked in the more expensive models.

Well, there is none of that here. It looks to me like 3SIXT has decided that if an adjustment or setting is supported in the chipset, it’s going to be made available to the user. So the main menu has seven pages with six items on each for a total of forty. It’s like the same thinking as the collection of accessories: is there a chance the consumer might need it? It’s possible, so let’s put it in!

Don’t worry, you can ignore most of the choices and options. You can just leave, for example, the photo ISO on the default of “Auto”. You only need to intervene if you want one of the fixed values. But, for example, consider the video capture resolution. Above I mentioned the four listed in the specifications, but in fact there are eleven choices, including 1080p at 30fps, 720p at normal frame rates, plus WVGA, VGA and QVGA. WVGA is US-style standard definition in wide screen. QVGA is a tiny 320 by 240 pixels. Will you ever need those? Highly unlikely, but if the hardware supports it, why not leave it as available, just in case? In case you haven’t guessed it, I approve.

Other things buried in there: Car mode – which causes the unit to automatically record in the event of a shock – various exposure and picture settings, a time lapse record function (up to 60 seconds between frames), and aqua mode which filters out the strange underwater light. Plus a whole bunch of other things.

The unit worked very reliably. The only wobble I had was on one occasion after playing back some videos on its rear screen the action camera locked up, becoming unresponsive to the controls. That was easily fixed by removing the battery for a moment.

The general video and picture quality was middling. At its best, with plenty of light the sharp UltraHD video was dazzling. But there simply wasn’t that much to separate full HD from UHD in picture quality. Not surprising, really. The difference between even UHD Blu-ray and regular Blu-ray is a lot harder to pick in terms of resolution than most people realise. Either, though, gave strong results.

There’s quite a bit of barrel distortion around the edge of the picture, due to the very wide field of view. There are two slightly narrower fields of view available (in that comprehensive menu system). Zooming up to 4x is possible and this of course also narrows the field of view, reducing edge distortion, while making the stuff still in the frame a little softer. But here the 4K comes in useful because this increases the detail in the image able to be zoomed. It doesn’t make a huge difference, but it makes some.

For stills, this camera won’t match the better smart phones, but it’s nonetheless a useful feature  to have.

The WiFi function can be used to transfer videos and photos to the phone or tablet, to somewhat remotely start and stop recording or take photos, and to make a subset of the adjustments available through the camera’s own menus. The camera does not connect to your home WiFi network. Instead you connect directly to it as a wireless access point with your iOS or Android device and use an app called Canany to perform those functions. That’s what I meant about somewhat remote. You have to have the control device and the camera close enough to each other for the WiFi connection to be maintained.

Trying to play back 4K videos from the camera wasn’t very satisfactory because of frequent pauses. The wireless connection didn’t seem to be fast enough to support a continuous flow at this resolution.

I did some calculations on a fifteen minute UHD recording (recordings longer than 15 minutes are stored in 15 minute chunks), which ended up being 2.6GB in size. That worked out to around 23 megabits per second. The 802.11n standard, supported by the camera, has a claimed top speed of up to 600Mbps, but that depends on both ends being fully equipped with complete capabilities. The camera supports only the 2.4GHz band I believe, so that tends to limit transfer speed, especially as my office is awash with communications in the 2.4GHz band all the time.

Warning: Geek Paragraph! When I connect devices directly to gadgets with them acting as an access point, I like to have a look to see if they serve up a web page. Sometimes there’s interesting stuff buried in there. This one has an IP address of 192.168.1.254 and a pretty basic web page allowing some file uploads.

In addition to charging via the USB connection, you can transfer videos and photos to a computer so connected. The 3SIXT device can act as either a USB PC camera or mass storage when connected; you choose.

Is the 3SIXT Ultra HD Sports Action Camera the ultimate in the field? No way. But what it does offer is decent performance at an astonishingly low price, and with a full set of accessories included. I just added a tripod and an extendable pole to complete the ensemble.