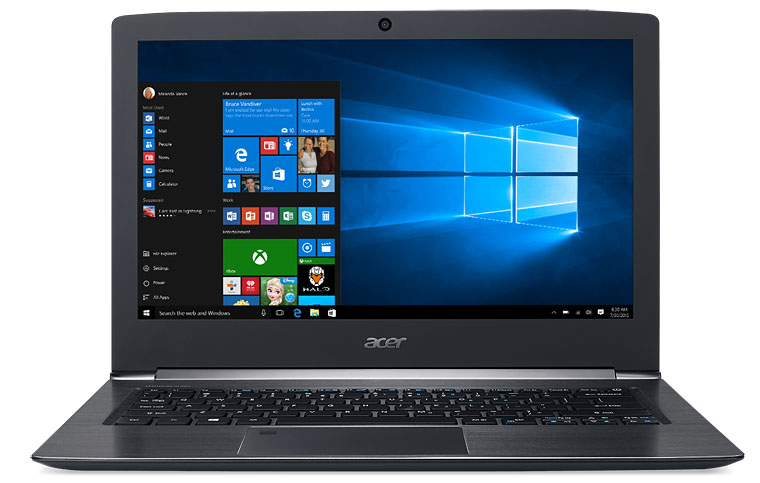 Starting with a Hewlett Packard OmniBook I purchased back in the early 1990s, my notebook priorities have been long battery life and excellent portability at a reasonable price. I’m thinking that the Acer Aspire S 13 notebook computer might be one of the best today on those criteria.

What you get in an Acer Aspire S13 is a very thin, well-built “traditional” notebook with, well, long battery life, excellent portability and a reasonable price. I should note that the review unit was the top of the line model, which explains a price that might seem to belie my assertion that the price is reasonable. So let’s briefly look at the models.

The entry level model is only $999. It scores an Intel Core i3 processor running at 2.4HZ, 8GB of RAM and a 128GB solid state drive. The next one probably occupies the sweet spot, with an i5 (2.5GHz), 8GB RAM and 256GB SSD for $1399. That’s a thousand dollars less than the similarly specified HP Spectre 13. Admittedly the Spectre is thinner, lighter, more future-proof and, let’s face it, sexier. But, well, a thousand dollars.

At this point I must place a caveat here. In the fast moving world of computer technology, the Acer Aspire 13 seems to have been upgraded in the few weeks I’ve had the review unit in hand. The review model is equipped with the sixth generation Core i7-6500U processor clocked at 2.5GHz, whereas the model now for sale comes with the seventh generation Core i7-7500U running at 2.7GHz. Otherwise nothing has changed. The one you buy will be, if anything, better than this one.

So, long battery life? Acer says up to a footnoted* thirteen hours. A lightweight, SSD-equipped notebook with a 3-Cell Lithium Polymer, 4670mAh battery ought to be good for a few hours at least (in practice, between two and half and ten hours, depending on what you’re doing – see below).

Portability? A weight of 1.36 kilograms, 14.6mm thick and 327mm by 228mm in the other dimensions is certainly reasonable.

With that you get a 13.3 inch screen using IPS technology and offering full HD resolution, and a more or less full size keyboard. By that I mean that the key spacing is full sized, but some keys are dual purpose. That’s always the case with notebook computers of course, but with this one the “Home” and “End” keys were secondary functions of the Page Up and Page Down keys. They’re keys I use a lot so it took me a while to get used to hitting that “Fn” to make them do what I wanted. I would have preferred to sacrifice other key functions.

There are two USB 3.0 ports, plus HDMI, plus one USB Type-C, with support for USB 3.1. This last one provides a bit of that important future proofing, while the old-fashioned USB 3.0 ports mean you can use your existing accessories. The USB-C is not for charging – a separate connection is provided for that. There’s also a full size SD card slot.

Wireless ac is supported with 2×2 MU-MIMO support for very fast WiFi if the WiFi router is equivalently equipped. There’s Bluetooth also for linking with control devices and audio equipment.

Acer doesn’t specify the built materials. I’d guess aluminium. It’s finished in a matt black with what Acer calls a “nano-imprinted exterior”. This has fine grooves on the surface, front to back. The hinge area is finishing in a subtly contrasting titanium look. The area around the keyboard is dark grey and has a brushed aluminium appearance. This section is a real fingerprint magnet. Stopping it from always looking greasy was a real challenge. There was one “dot” to the right of the Backspace key which was really hard to scrub off … until I realised it was actually a tiny hole for the microphone.

Despite the light weight it’s pretty solid. You can hold it by a corner with the screen deployed and there’s no flexing. Lifting the lid is a two handed job because the friction in the hinge makes the lightweight keyboard section lift as well.

This was a fun and fast computer for general use, although compared to an i5 the performance enhancements were modest rather than revolutionary. In normal use there was no noticeable difference. There might be some advantage it you’re doing heavy data processing, perhaps a bit of video work.

What was nice was the large SSD. On a fresh install with my favourite apps also installed, there’s around 440GB of free space. That should permit use without constantly shifting data off to make room. For a while, anyway.

The model delivered had an older version of Windows 10, so it needed an upgrade which went smoothly. I expect that the ones on sale now will be up to date (until the next version of Windows lands, in the first quarter of next year).

All the usual stuff worked as it should. It took a couple of goes for the computer to connect wirelessly to a Microsoft Wireless Display Adaptor, but once it did, the connection remained solid and it connected reliably thereafter.

Microsoft Hello isn’t supported, so there’s no face recognition to log on. You’ll need to use a password or PIN for that.

The display screen was nicely bright – unlike the Acer Switch Alpha 12 we looked at a while back. That device topped out at 113 Lux. The Aspire S 13 happily hit 320 Lux (using Windows “Paint” maximised and a full white canvas displayed), display brightness on 100%). Even with the output reduced to 40% (the default setting for battery operation) the output was 150 Lux. It has a matt finish which tends to keep reflections down. On an overcast day it was perfectly usable outdoors, and even with full sun it was easy to see text and such while in the shade, or even not in the shade so long as the sun wasn’t reflecting directly off the screen.

The keyboard seems to have solid under-pinnings. There was no “give” or unexpected bounce. All the keys registered positively. The body of the computer worked well enough as a wrist rest (or, more properly, a heel-of-the-hand rest). The keyboard is backlit, its effectiveness limited only by having to grope in the dark to find a “Shift” or “Control” key to hit in order to get it to light it up so you can see what you’re doing. The same problem as just about all keyboards.

The touch pad was large, and while not quite glass-like, still very smooth. It registered slides and two fingered scrolls well nigh perfectly, and light single and two fingered taps equally well.

The computer carries a “Dolby Audio” label. There’s also a Dolby Audio app which has various sound modes (“Dynamic”, “Music” etc) and a twenty band equaliser. No one has more respect for Dolby than me, but come on. The bottom quarter of the EQ sliders have no effect on the sound because, of course, the speakers are incapable of reproducing any bass. The speakers are at the bottom on the edges near the control and arrow keys. They give a wide stereo spread and a surprisingly decent volume level, although their tone tended to wobble as I was typing since my hands would get in the way of the sound. I’d suggest Bluetooth or headphones.

There are assorted programs included from Acer, some of which follow the tradition of pointlessly replicating what’s already built into the operating system. For example, when I tried to turn off/put to sleep the computer using the power button, nothing happened. So I checked the Windows settings, and it was definitely set to put the computer to sleep. So I tried again, holding down the key for several seconds. And then the “Acer Power Button” app appeared (and, yes, that’s its name), giving me the exact same options as Windows does.

But I did like the on-screen indication when the caps lock was pressed. One can never be reminded too much of that.

On battery, the screen runs at 40% brightness by default. Running down the battery with the computer doing nothing but displaying the Windows desktop took ten hours and 18 minutes to a battery capacity of 5%, at which time the computer shut itself down. Most computers seem to cut out at 5%, even though in many cases that suggests significant working time remaining, another half hour in this case. I think I’d prefer it if my computer would hold out until there was just enough power remaining for a graceful shutdown.

Anyway, you can regard ten and a bit hours as the upper limit for battery life, and using a UHD clip looping full screen in VLC, the lower limit was two hours and 22 minutes. With the first scenario the fan didn’t come on at all. With the second it was whirring continuously. The sound wasn’t too intrusive, but certainly noticeable in a quiet room.

I can strongly recommend the Acer Aspire S 13, particularly in the $1399 i5 version, for those who who want a light, thin and practical computer at a reasonable price. And except for those fingerprints, it’s a quite handsome looker as well.

* You know, with the usual qualifications essentially saying that the claim is meaningless.