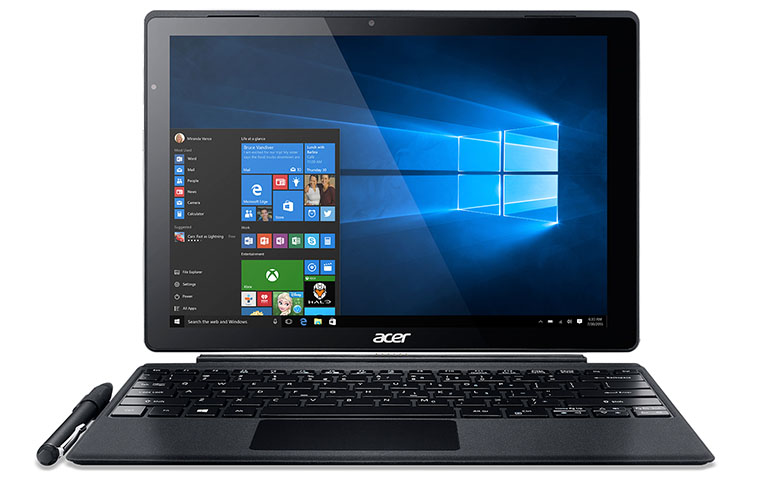 I’ve previously written about my choice of a Surface Pro 4, and the main reason I selected the Core M3-powered version. Well, Acer has come along with a nifty tablet/notebook hybrid of its own which manages to eliminate any need for a low powered processor. The Acer Switch Alpha 12 comes with a choice of processors from the Core i3 through to the Core i7, and because they are all liquid-cooled, not one of them is fitted with a noisy fan.

I’m old enough to remember the near universal expressions of horror when the 80486 processor came out. At least, I think that’s the one. Perhaps it was the 80386 before it, or the Pentium following it. Whichever, the outrage was because the processor needed a cooling fan clipped directly onto the chip. Previously, there may have been cooling for the case, but that was it.

That the outrage has now dissipated – indeed, been pretty much forgotten – is attested to by the failure of my Google skills when I tried confirm which processor led to it in the first place.

But I, for one, hate the white noise of a cooling fan that’s in top operating order, and even more the rattle or whine of one that’s seen a fair bit of use. So the idea of liquid cooling is wonderful because it means silence.

The Acer Switch Alpha 12 consists of a twelve inch (306mm by my measurement) Windows 10 tablet with all the computery bits built in, a separate, attachable keyboard that doubles as a screen cover, and a stylus. In short, it’s like a fully equipped Surface Pro, with a slightly smaller (by a third of an inch) screen. The case is a lovely brushed metal – aluminium perhaps. There’s also a web cam on the front and a rear camera.

The tablet has a kick stand. The keyboard (included in the price … score one for Acer!) snaps on magnetically and has a cloth loop for holding the stylus. I’d guess that the keyboard comes out of the same factory that makes the Surface Pro keyboard. Some details are a little different, but the look is the same, the feel is similar and full size keys are offered. Unlike the Surface Pro, opening the keyboard on Acer Switch Alpha 12 wakes up the computer (score two for Acer!)

The display is QHD resolution, which is to say 2160 by 1440 pixels, which makes the pixels invisibly small for a fine looking picture. Viewing angle can be extreme with no effect on contrast or colour.

And all of them operate silently with liquid cooling rather than whirring fans.

Acer specifies the unit as being 15.9mm thick. That includes the keyboard. Without it the thickness comes to around 12mm by my measure, 9.5mm by Acer’s. The difference is there’s additional thickness around the base of the kick stand. Acer also says it weighs 1.25 kilograms. I made it 1285 grams with keyboard, 915 grams without. Remember, it can run in tablet mode, so you may not need the keyboard depending on your application.

The stylus is pressure sensitive (I had trouble finding how many levels are detectable). The press release said this was an option. The website was unclear. I confirmed via email with Acer that the stylus (elsewhere referred to Active Pen) definitely is included. It runs on a single AAAA (yes, four As) battery that ought to be good for well over a year.

The WiFi support extends to 802.11ac. There’s a USB 3.0 socket on the side, plus a USB Type-C socket with USB 3.1 support, plus a 3.5mm headphone/microphone combo port. The unit is expandable using the new Acer WiGIG dock, which offers 4.6Gbps wireless connectivity and has Display Port and HDMI outputs, plus Ethernet. I used a generic USB Type-C expansion unit to provide more USB 3.0 sockets plus Ethernet, and that worked perfectly well.

There’s a side-mounted microSD card slot. You can use it, obviously, for transfer of content from devices that are compatible with this storage. But for most of us, the best use is simply to expand the space available by dropping in a large capacity microSD card … say 128GB or bigger. You shouldn’t put software on there because it’s not going to run as fast as the SSD, but it’s perfect for media and any bulky documents you need.

Computers come in for review in a variety of states. This one was running a reasonably up-to-date version of Windows 10, 1511 (ie. the last major update before the new “Anniversary” edition of early August.), and had a non-password-protected generic Acer log in.

Previously I’ve been accepting computers pretty much as is. But starting with this computer, I’ve decided to try to review from the basis of a customer receiving their computer brand new out of the box. So I’ve taken to performing a factory reset on each computer before I start. That process typically involves wiping the main drive and reinstalling the version of Windows with which it shipped, plus any other software. After that, if the Windows version is 1511 and not the Anniversary edition (1607), I use a download of 1607 on a USB stick to upgrade the computer. I’m assuming that purchasers will allow Windows to keep itself up to date. And with a stylus-equipped computer, moving to 1607 is pretty much a necessity, given the enhanced inking functions in that version.

So that’s what I did. The upgrade to 1607 was incident free and its features worked nicely. I enjoyed the stylus. The rocker switch on the body (kind of like left and right mouse buttons) was easier to use than the Surface Pro arrangement of one on the body, one on the cap. Using suitable software, it varied the thickness of the drawn line very smoothly according to pressure.

The keyboard was also quite good in use. There was a bit of flex when I was pounding away, but it seemed to handle it fine, and this didn’t detract from the accurate detection of keystrokes. The touchpad was smooth and worked well, even though it looked a touch weird, curving up at the edges.

The performance of the Acer Switch Alpha 12 was pretty much on a par with the other notebooks I’ve been reviewing lately, which isn’t much of a surprise given that they’ve all been SSD-equipped and all carry the same CPU. It’s going to do everything any regular use wants to do quite quickly enough. The i7 option is available for those who might find themselves with wrestling with video editing, or performing brute force attacks on mathematically intractable problems.

The screen was surprisingly limited in how bright it would go. At 100 per cent output while attached to power (using Windows “Paint” maximised and a full white canvas displayed) the highest reading I could get from the centre of the screen was 113 Lux. My Microsoft Surface Pro 4, by contrast, measured the same way, produced 454 Lux at maximum output.

It didn’t seem dull in practice, except when sitting side by side with the Surface Pro. On battery, by default the brightness remained the same as when it was on power, so it worked fairly well outdoors … in the shade of course, and orientated so as to avoid too many light reflections on the glossy screen.

The high consumption battery life test (a 50Mbps UHD video looping in VLC) really gave the system a workout, depleting the battery in one hour and 54 minutes, down to an alleged six per cent remaining, at which point the unit switched itself off. During this time the back got quite hot, especially towards the middle of the tablet on the right hand side (looking from the front), but not so hot as to be uncomfortable to the palm of my hand. I wouldn’t want it resting on less sturdy skin for too long, though.

Maximum battery life – screen brightness at default for battery operation (100%, as mentioned) and doing nothing other than displaying the battery indicator, it lasted for eight hours and fourteen minutes to the 6% remaining switch-off. That basically defines the extreme endurance limit. You’re typically going to get less than that.

The unit was quick to charge. A couple of hours would get it up to 100%.

I’m inclined to think that I’d prefer a Surface Pro 4 except for two clear advantages for the Acer Switch Alpha 12. First, it has USB Type-C which is clearly the emerging connector standard. And, secondly, price. For a similarly specified (processor, RAM and SSD) the Surface Pro 4 is going to cost $1999 … plus the cost of the keyboard which is another $199. That’s around $470 more.

Which means that the Acer Switch Alpha 12 is quite the bargain.