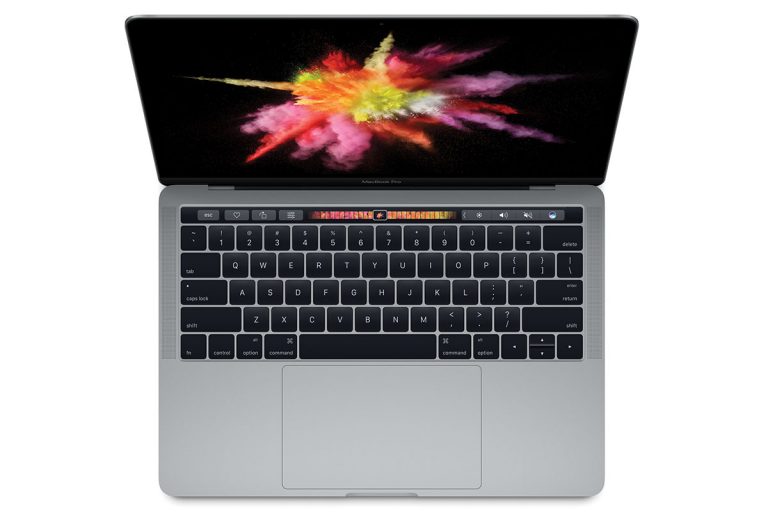 We’ve already had a look at a new model MacBook Pro, but that was the entry level model, so it lacked one of the most interesting new features of the range, the Touch Bar, along with its Touch ID sensor, or what would otherwise be called a fingerprint scanner.

The review unit was what was until recently the top of the line model. I say recently because there has now been a slight makeover, with upgraded CPU and graphics card, and a reduction in price.

The review unit was a 2.7GHz Intel Core-i7 with Intel HD Graphics 530 and the Radeon Pro 455 graphics card. It has 16GB of RAM and a 512GB solid state drive. More specifically the processor is the Intel Core i7-6820HQ.

I’m guessing the equivalent in the newly refreshed line up is the $4099 2.9GHz Intel Core-i7 (it looks like it runs the i7-7820HQ processor) with Intel HD Graphics 630 and the Radeon Pro 560 graphics card. All I can say about all that is that it’d be much the same as the review computer, except a little bit faster.

Apple has committed to USB Type-C connections. The four connectors – there are two on each side – support both USB 3.1 and Thunderbolt 3.0. You can charge the computer using any of them, so you can power it from the left or the right as convenient. The power adaptor itself also has a USB Type-C outlet, rather than the old fashioned USB socket on most other computers. There’s also a 3.5mm microphone/headphone connection.

The keyboard is Apple’s new short travel type, while the touch pad is enormous – 160mm by 100mm – and supports “Force Touch” technology. Also included is the Touch Bar. This is a touch sensitive strip – remember, there are still no Macs with touch sensitive screens – where one would normally find function keys. It has a display function, so it presents labelled soft buttons and suggestions, ready for you to touch. These vary depending on the application you’re using, so they’re context sensitive. At the right hand end of this is the combination power key and fingerprint scanner.

The built in Retina display has a resolution of 2880 by 1800 pixels and goes up to 500 nits of brightness. In addition to the built in display, the computer can drive two external 5K monitors or up to four 4K monitors.

Apple specifies the battery life as up to ten hours using the Web via WiFi, or for watching a movie in iTunes.

This is no lightweight, but a performance machine. The weight is reduced from earlier models, but it still comes in at 1.83 kilograms. It measures 15.5mm thick, 349.3mm wide and 240.7mm deep.

Apple clearly wants one to use Apple Pay. Indeed, I’d suggest that during setup, it was borderline pushy in its encouragement of the user to sign up. There was no “No Thank You” option. The most it would allow was “Set Up Apple Pay Later”. Afterwards, though, it didn’t bother me about the matter, so the “Later” would have been whenever I chose, if I ever did.

As I may have mentioned, I’m a long standing Windows guy and so there are aspects of Macs with which I’m sometimes less familiar than I ought to be. So, for the longest time, I found the touch pad very frustrating. And it was entirely due to me using it incorrectly.

Mac touch pads are actually things of beauty. Have been for years. They are smooth to the touch, positive in operation, and powerful in functionality. As a Windows guy, the Mac touch pads are the standard by which I judge those on Windows computers, and they always come up short.

But I hadn’t realised that there was this thing, around for a couple of years now, called “Force Touch”. Essentially, the touch pad can now detect how hard you’re pressing down and deliver different responses based on that. But I didn’t know. So when I was trying to drag some files from my network drive to the Mac, instead of them being moved, they would open. I’d push harder, thinking that perhaps some hesitancy on my part had resulted in a double click. Yet every time they’d just open. At one point I resorted to plugging in a wireless mouse.

And then I worked out what was going on. I was pushing way too hard. I was not just clicking the touch pad, I was pressing through the deep, secondary click. The first, light, click was for grabbing stuff to drag. The second, harder, click was opening the file.

Once I was aware of that, it become extremely easy to use.

Once you start using the computer, the new Touch Bar it starts becoming useful. Almost immediately. As part of the setup process, about the second thing I did, was go to the OneDrive site and log on. I started typing my email address and the address appeared on the touch bar. I touched it and it auto-completed.

Yes, that kind of thing can be and often is done on screen as well, but it somehow seemed new and interesting doing it that way. This, it turned out, is a function of Safari. When I later had to re-enter those details in the OneDrive dialogue, there was help on the touch bar, but it was just with word spelling, not an offer to complete the email address.

In every way this computer was a delight to use. The battery lasted a very long time. The display was smooth and bright. Siri was her usual quirky and generally helpful self.

All things being equal, I’d probably like a keyboard with greater travel (I used a fine Logitech mechanical one on my desktop, so you know where I’m coming from). But in practice the Mac very short travel keyboard proved to provide a positive experience. And since the frame of the computer was so solid, there was no flexing are anything else to make typing less positive.

I could rave some more about how great the touch pad is, but I’ll spare you that. It is a fine, fine computer.

A digression on power

So I went online (using my desktop computer) to see if there were any obvious answers. And as I was searching, out of the corner of my eye I thought I saw a small flash of red from the direction of the MacBook Pro. I looked around, but the screen was black. Then after – what, five or ten seconds? – it happened again. So I paid more attention, and was rewarded after a while with the appearance, for a second or so, of a large icon of a battery, with a thin red band at one and a lightning bolt. Which I assumed was indicating the battery was too empty for the computer to start up.

I resolved to let it be for a few hours, but after about five to ten minutes, another flash appeared in the corner of my eye, this time white or green, not red. So I pressed the power button and was rewarded with the Apple logo and a normal startup.

I mention all this because I don’t think it’s good design. I guess one can interpret the red battery logo as meaning “battery too low for the computer to start”, but if so it ought to come on whenever you press the power button. Remember, there are no power LEDs or any other indicator on this computer outside the screen itself, the touch bar and the tiny LED on the caps lock key.

Had this been my own computer, I would have spent quite a while with my heart in my mouth, especially after reading several “help” forum articles criticising users for battery abuse.

As for actual battery life, I ran my usual best-case, worst-case tests. In the former, I did a fresh restart, let startup housekeeping complete, then pulled the power and did nothing with the computer – I’d set the screen to stay on indefinitely – until the battery ran down.

How long do you reckon? The computer switched itself off after 23 hours, 59 minutes and 55 seconds.

For the other extreme, I used my usual 50Mbps, UltraHD H.264 test video on a loop, playing in VLC. That resulted in the computer switching off after 3 hours, 8 minutes and 36 seconds.

Those are both extraordinary results. I reckon Apple’s ten hour claim is pretty realistic.

Charging up again from fully discharged took 2 hours and 6 minutes.

The charge indicator was nicely linear. Which is to say, if you do something for an hour and the indicator says that you’ve got 90% of the battery remaining, you should get another nine hours out of it if you keep doing the same thing. The battery indicator actually works itself all the way down to an indicated 0% before the computer switches off.

As using the Apple MacBook Pro 15 inch is a seriously impressive computer. And now that the mid-year refresh has arrived, it costs a little less and performs a little better than the model reviewed here.