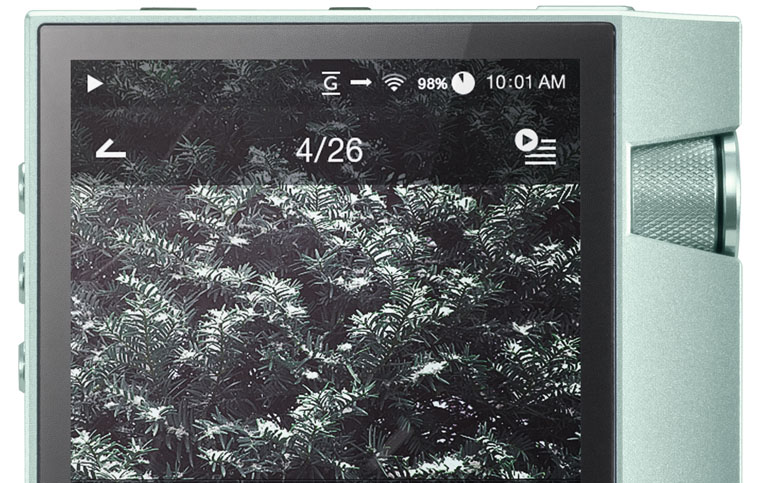 Once upon a time there was a company called iRiver, which was a very early business in the MP3 player space (it even predated the iPod). The iPod, along with the later iTunes store, proved to contain that unknowable magic sauce that turns a consumer product into a phenomenon. But iRiver kept going, and with a change of ownership rebranded itself into one of the leading purveyors of ultra high fidelity portable music players.

Which brings us to the Astell & Kern AK70. Astell & Kern is the classy sounding rebranding. The AK70 is the lighter weight, lower cost version of its high end portable music players. Now $999 might seem a lot, but do remember that the brand’s current flagship model retails for over $5000.

So why would one want a music player other than an iPod? Features, high fidelity and music format support. And build.

The Astell & Kern AK70 is built using a machined aluminium chassis and case. Finished in an unusual cool mint colour, it is a sometimes dangerous object with sharp corners and edges. Happily it comes with the company’s leather case which softens those corners.

The squarish sharp design make it look bigger and heavier than it actually is. It’s no iPod Nano, but at 132 grams and 61mm by 97mm by 13mm it is scarcely noticeable in a jacket pocket. The front carries an 84mm 480 by 800 pixel touch screen, through which you’ll do most of your interaction with the unit. Underneath the display, while still within the glass area, is an invisible touch sensitive ‘Home’ key that brings the screen back to its base display. It also has on the left side fast forward/skip, reverse/skip back, and play/pause keys. And on the right side, a large, smoothly operating volume knob which is unlikely to be accidentally manipulated due to it being inset into the casing.

The unit plays pretty much any digital audio format. The listed formats are WAV, FLAC, WMA, MP3, OGG, APE, AAC, ALAC, AIFF, DFF and DSF. Those which support high resolution audio – up to 24 bits and 192kHz – are happily played by the Astell & Kern AK70, as are Direct Stream Digital music files (that’s the format of the Super Audio CD) in both regular and double speed forms.

High resolution audio consumes a lot of storage space, even when losslessly compressed like FLAC and ALAC. It has 64GB of storage built in, and has a microSD card slot to allow the addition of up to 128GB more.

Still not enough? Here’s where things get wild: it will play music from your home network using DLNA standards (that is, the Digital Living Network Alliance standards used by non-Apple players for network audio). You can dial up the music available on your network that you might use for other devices, such as multiroom systems, and play it back on the AK70. Only so long as you’re home, since you need to be connected to the network via the built in WiFi (802.11 b/g/n, 2.4GHz only). And you can also play the music on the unit to any speaker or system in your home that is DLNA compatible.

In fact, you can use the Astell & Kern AK70 as a controller: have it play music from your network to a speaker on your network! It’s extremely flexible. You can also play back using Bluetooth. The higher quality aptX codec is included.

Finally, you can plug it into a USB socket on a computer and use the AK70 as a high quality Digital to Analogue converter.

The unit has two headphone outputs. A standard one and one for high quality (and expensive) ‘balanced’ headphones. The standard output can be switched to line level mode for when you’re plugging it into a stereo.

What it misses out on is the iPhone ecosystem, including things like automatic podcast management. If you are a podcast fan, you’re going to have to manage things yourself, and given many podcasts don’t contain sensible ID3 tags, that can be a real pain.

As seems to happen with so many devices these days, a firmware upgrade was available for the unit as soon as I started using it. How did I know? As soon as the WiFi connected it informed me. The download was 158MB. This was the firmware – version 1.10 –installed for the duration of the review.

I popped in a 32GB microSD card and plugged the unit into a USB slot on my Windows computer. Within seconds ‘AK70’ appeared in Explorer. A double click revealed two drives: the AK70’s internal memory and the SD card slot. Loading in music was simply a matter of dragging tracks and folders from other drives and network resources on or available to my computer. You can be orderly with your tracks and folders arranged into some kind of sensible hierarchy, or be chaotic with tracks scattered around a disordered collection of folders, and the AK70 won’t care. It will scan the tracks wherever you put them and read their internal tags in order to provide Album, Artist, and Genre lists (and cover art when playing back). There are also playlists (which you can create yourself) and access via folder.

All this is the same if you’re using a Mac, but you’ll have to install some software available for download from Astell & Kern to allow the Mac to work with the Media Transfer Protocol used by the unit. Or you can download music from your network to the unit via WiFi.

There was also a ‘Store’ option, which provides access to a Korean online music store containing what appeared to be Korean pop music. I’d say more, except that I don’t read Korean.

The Astell & Kern AK70’s interface worked very effectively. Some settings (eg. random, and repeat, EQ, which DLNA speaker you want to play back to, whether you want the unit to be a DAC to a connected computer or to present itself as storage) are available there, along with the cog to access deeper levels of settings. When selecting speakers to play, or sources to play back from, you just swipe through the items sideways.

The sound was absolutely first class. In part that was because I was playing the highest quality tracks in their highest quality formats, without downgrading them to MP3 format as one normally does for portable music players. But the hardware itself was also clearly excellent.

The AK70 drove my main, lowish sensitivity, headphones to extremely high levels with ease, with control, and with a complete lack of distortion. It controlled their large diaphragms well, even down into extremely deep bass notes. Listening was a delight at all times, and with all formats, including with my limited collection of fine jazz tracks in double-speed Direct Stream Digital (DSD128). The WiFi connection provided sufficient speed to allow even this data-heavy format to stream without interruption.

Well, there was one interruption. The player is apparently not inherently ‘gapless’, which is the ability to play run-on tracks without a hesitation between them. But there is a ‘gapless’ mode which can be selected. This seemed to work to some extent – with just a very slight catch between tracks – on music playing back from internal and microSD storage. But it didn’t work with network music, with there being a gap of a good part of a second between what should have been continuous tracks.

It worked equally well with earbuds of varying kinds. No earphones or headphones are provided with the Astell & Kern AK70. It is assumed that you’d be particular about your needs in those areas.

The player does not support inline remotes, so a play/pause button on your headphones will be of no use.

Clearly $999 makes the Astell & Kern AK70 an expensive portable music player. But, adjusted for inflation, it’s cheaper than an early model iPod was in its day. If you have a library of high resolution music (or even losslessly compressed CD-quality music), and want to preserve quality when you’re out and about, or simply avoid the hassle of duplicating your music in MP3/AAC for portable use, the Astell & Kern AK70 is going to do a fine job for you.

Overall
Features
Value for money
Performance
Ease of Use
Reader Rating0 Votes
Superb audio performance, excellent build, wide format support, extremely flexible in use
Not convenient for use with podcasts, playback not entirely gapless, careful of those corners!
4.5