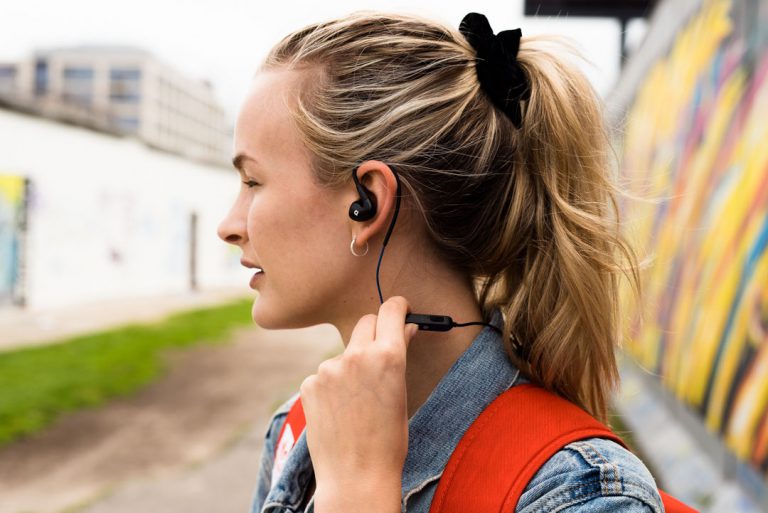 I hadn’t heard of Audiofly before, but it turns out to be a Western Australian firm formed five years ago to create professional headphones and earphones. And now it has turned its attention to consumer products. Here I’m looking at its AF100W wireless earphones.

Professional ear gear has particular requirements. If you’re a performer on stage, these days you’re likely using what’s called an IEM, or “In Ear Monitor” rather than the foldback wedges that traditionally allowed you to hear yourself. For IEMs to work well, they need to be very accurate, and very good at keeping out external sounds. You want to hear the mix as delivered through the earpieces, not the uncontrolled mix experienced on the stage.

Audiofly appears to have brought those qualities to its consumer models. But I’ll get to that.

What we have here is a set of Bluetooth earphones. They appear to be the wireless version of the Audiofly AF100 in ear monitors, sharing some of the same specifications. The AF100 are the entry level models of the IEM range. They are priced at $129.99 The other five models go all the way up to $849.99. All the IEMs use wired connections. I would not be surprised to see all manner of on stage performers with some them squeezed into their ears.

The ear pieces are on the ends of thin over-ear hooks which ensure that even if the earpiece pops out, it will remain more or less in place. They come with mid-sized foam tips in place on the earpiece stalks, but also included (in the zip up case) are six silicon tips of different sizes and shapes. There ought to be something in there to make them fit everyone.

The cable between the two pieces is about 600mm long and it has clamp which you can use to tighten the cable. The cable is cloth wound rather than the usual plastic finish, and that tends to make it less grabby on your clothes. Audiofly calls it “Cordura fibre technology” and says that it adds “tangle resistance and … strength and durability to the headphones.” According to Wikipedia, “Cordura fabrics are known for their durability and resistance to abrasions, tears and scuffs.”

On the left side is the three button control and charging pod, on the right another one of the same side holding the microphone. I assume that the battery is in two parts, one half in each. The nice thing about this arrangement is that it wasn’t inclined to pull the whole cable to one side or the other.

The charge port is Micro-B USB and it’s covered by the usual fiddly rubber/silicon cover. This is a little flimsy and I managed to accidentally pull it completely off. I’d criticise, except that I’ve yet to see a full satisfactory USB port cover that wasn’t fiddly, and likely subject to coming apart. Anyway, try not to do that yourself in order to protect the earphones’ IPX4 rating – which is safe against water splashes.

The earphones feature dual-membrane dynamic microdrivers with neodymium magnets to produce the sound. Their frequency response is rated at 20 to 20,000 hertz. Sensitivity and impedance ratings are also specified, although these are quite irrelevant to the user since they are powered internally.

Audiofly rates the run time at five hours and charge up time at seventy minutes (on the web site) or one hour (in the instructions). It says they can last for up to 200 hours while charging.

I’m pretty fussy about headphones and earphones. The latter present difficult design challenges because they’re injecting the sound right into your ear canals, unmodified by your ear surrounds, the shape of your head, the acoustic environment in general. Many earphone designs seem to have been designed in ignorance of those facts, and end up punching nasty, difficult levels of treble into your ears.

I don’t like writing really, really negative reviews, which means I frequently feel rather hesitant to set fingers to keyboard with earbud reviews.

I received these earbuds the day before yesterday. I charged them up that evening and wore them much of yesterday, in part because daily life demanded a lot of walking from me. I’m wearing them right as I’m writing, enjoying Cake’s Fashion Nugget. I’m not delaying in writing this review because there’s almost nothing negative to write.

And absolutely nothing negative when it comes to the sound quality. The Audiofly AF100W earphones don’t sound like earphones at all. They sound like very high quality headphones. The sound balance is just as it should be. Or very close to it. The treble is clearly extended, but if anything a little too controlled, a little too restrained.

Is that a problem? No, it makes for a wonderful listening experience. It allowed me to listen with the volume up a little higher than I would normally have it, since I could be confident that the higher frequency elements of my hearing weren’t being knocked flat in a blast of excessive loudness.

There was a pleasing sense of “distance”. The sound didn’t seem like it was being directly fed into my ears, but could have been out there somewhere.

Not to say that there wasn’t plenty of detail. There was great clarity in the sound, along with plenty of bass. Indeed, the bass was strong and fairly well extended. The bass guitar on Yes’ “Heart of Sunrise” from the album Fragile was gripping, propelling the music forward with great dynamism.

Noise isolation was excellent. The already-attached tips proved to be a fine fit for my ears, and with them in place they kept out the outside world. They also provided excellent security. One of the walks was a bit over six kilometres, largely over uneven ground, at a reasonably fast clip. Throughout they remained perfectly in place.

Switch on, switch off and status is announced in a strangely lo-fo female voice. The instructions are both chatty and only partially informative. How, for example, do you pair to a different device, after having previously paired with one? (Answer: switch off, hold down button again to switch on and keep holding until pairing mode is announced.)

Hands free talking worked fine with my Android phone. Something in the instructions implied that one could use Google Assistant, although it didn’t explicitly say so (“… shout orders at the phone without interference”) but if so, I couldn’t get it to work.

For me, that stuff’s unimportant. What is important is that these are pretty close to the best sounding Bluetooth earphones I’ve used.