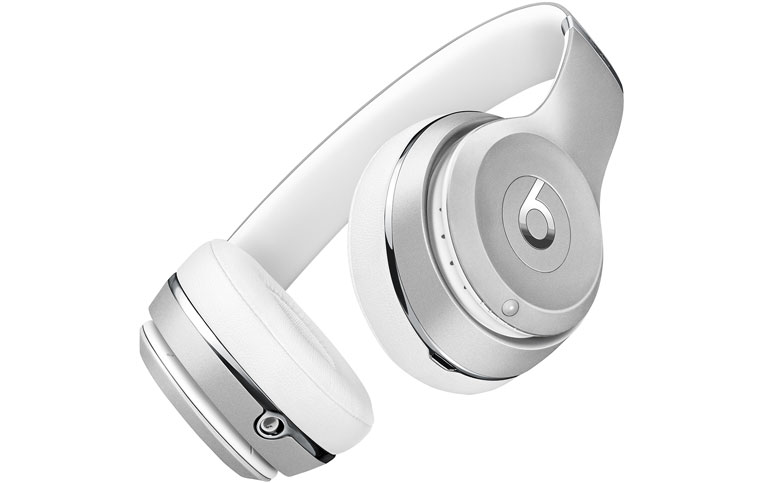 A couple of years ago the Beats brand of headphones switched from Monster and its Dr Dre branding to Apple. I must confess that at the time I thought Apple had bought a lemon. I and many other reviewers hated the original Beats Solo headphones, with its overblown bass and otherwise dead sound. So, now that Apple has had a chance to rework things, is it time to change my opinion? (Spoiler: Yes indeed!)

The Beats Solo3 headphones are on-ear, Bluetooth connected models. In addition to the Bluetooth connection they come with a 1.36 metre cable with a standard Apple inline remote and microphone. Should the headphone’s battery run out, you can still use them wired into your device.

The review model featured a white, silver and chrome finish (it’s called “silver”), but there are lots of choices: gloss black or white, black (non-gloss), gold, rose gold, red and “ultra violet”. The finish looked excellent. The padded underside of the headband and the ear pads had a leather-look finish, and managed not to result in too much heat build-up on the ears under normal circumstances, although in warm weather things might be different.

The headphones themselves have controls: a small power button on the right earpiece that doubles as a pairing button when held in; volume controls and a play/pause button on the left earpiece. All are easily found by touch. The play/pause key also skips forwards and backwards, and fast forwards and fast reverses in accordance with the normal button pressing and holding conventions. Five tiny lights give you a visual indication of battery charge.

A battery life of forty hours is claimed. It is charged via a micro-B USB socket. In emergencies, a five minute charge is enough to get it going for three hours. It is compatible, of course, with taking phone calls and using Siri.

So, how do they sound? With relief I can say that they sound largely as fine headphones should. The sound is reasonably balanced and detailed, and free of distortion. They haven’t abandoned their Dr Dre lineage entirely, hinting at it without delving deeply into its problems. The bass is clean and powerful and well extended into the deep, deep bass, and a little more prominent that is the norm with high fidelity headphones. I think given the target market, that’s appropriate. The treble was clearly extended, but kept under tight control. Some expected sibilant syllables were sanded off, yet cymbals were sharp and clear. On most music the result was tuneful and pleasing, rather than clinically precise. Toss in a bit of bass – I went with hip hop and electronica – and the delivery was as driving as the best of them.

The net result: headphones that suggest the street sound of the originals, without overdoing it. Which means they can be enjoyed by both normal people and reviewers.

There’s one other improvement, at least from my point of view. Those old models crushed. They pushed so hard on my ears that I could rarely last an hour with them on before they had to come off to relieve my ears. Aside from the pain involved, the pressure inevitably distorts one’s ear canals and forces additional changes to the sound.

These headphones applied enough pressure to stay securely in place with moderate head movement, while remaining comfortable to wear for hours.

And now, a thank you to Apple. For one reason and another, until a few months ago, I had never reviewed a set of Bluetooth earphones or headphones. The fact is, if I can have my druthers, I’d rather use wired headphones. Sure, wired headphones have their own problems – leads catch on things, leads eventually fail. But so long as the lead was in good order, you could be certain of one thing: there’d be no dropouts, no uncertain signals.

So what happens the first time I review some Bluetooth headphones? Dropouts galore. Not all the time, just when I had the player in my pants pocket and I was walking around. Okay … but what was causing it? Perhaps it was the source device (an iPod Nano is what I mostly use). They worked with a Windows computer fine, but you can’t put that in your pocket. They worked fine with the Nano from ten metres away when it was out of the pocket, sitting on a desk. When I held the Nano in my hand while walking, there were still dropouts, although fewer. My Android phone, just the same.

I had another pair of cheaper Bluetooth earphones handy so I tried them, and they had the same issues.

So I put it down to the iPod Nano (and phone) not liking being in my pocket. Perhaps static electricity was at play.

More recently I’ve been working on another set of earphones. These have also had problems with the iPod Nano. Lots of dropouts … but only when it’s in the left hand pocket of my pants. In the right hand pocket there are only very rare ones. Hand held there are a few more.

So I was kind of at sea here, without a compass. Are they all like that? Why does anyone use Bluetooth headphones at all? How come they’re so suddenly popular?

And then the Beats Solo3 headphones arrived. And they turned out not to care which pocket the Nano was in. Nor whether it was hand held. They just worked. Always, everytime, with never a pause. I listened for many, many hours using these headphones, and not once was there a dropout.

So, Beats, thank you. I was having my doubts about whether reliable sound via Bluetooth was even possible, but now I know that it is, and is actually available in at least one set of headphones.

It turns out that these headphones are Class 1 Bluetooth devices. Rather than 2.5 milliwatts of Bluetooth power, they are good for up to 100 milliwatts. Rather than a ten metre range, they’ll support up to a hundred metres. That explains a lot. I put the Nano on a rock in my front yard and went for a walk. I was seventy paces away when there were some dropouts. I looked back and there was a parked car in line of sight. I moved so it was out of the way and got another ten paces before dropouts. That works out to about sixty metres. Try that with most Bluetooth headsets!

Apple says that they use the “Apple W1 chip [which] provides an easy one-step Bluetooth connection and the added ability to toggle seamlessly between iCloud-registered devices.” I didn’t actually use them with a device directly attached to the iCloud, but somehow through the Bluetooth communication with my iPod Nano they renamed themselves as “Thomas’s Beats Solo3“, and that was the name that came up on the pairing menu with all other devices.

Incidentally, apparently they will pair semi-automatically with iPhones. And, yes, they work fine with Android and Windows devices.

Battery life? Is the forty hour claim too long? I don’t know. But I do know that battery life isn’t going to be much of a problem, even forgetting about the wired fall-back option. It’s Friday as I’m writing. I charged them up last week some time, but they spent a lot of time switched off until this week. For the last few days I’ve been using them extensively, listening around the house and on evening strolls outdoors, pairing with half a dozen different devices, switching on and (usually) allowing them to switch themselves off after a period of non-use. And even now all’s fine on that single charge, with four of the five lights showing.

I shall have to stop bad-mouthing Beats headphones now. Instead, I can say that the Beats Solo3 headphones really are rather good headphones for those who want enjoyable music and a rock solid Bluetooth connection.