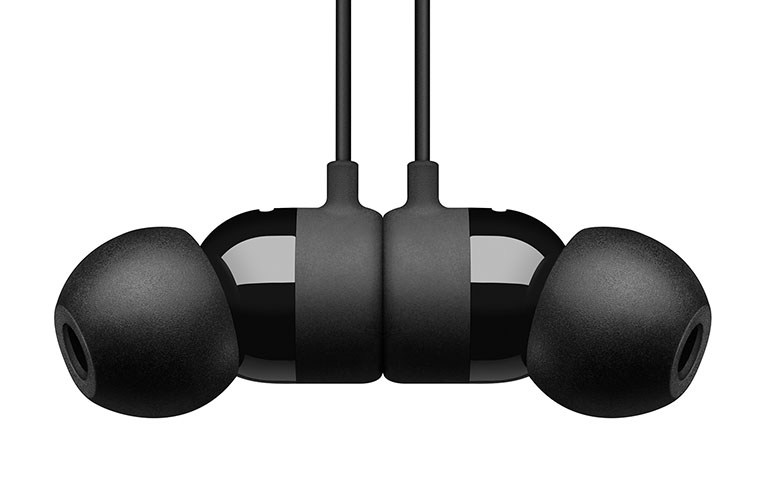 My quest for the perfect portable earphones for my iPod Nano continues. Wireless has become all the more important since I dropped the Nano the other day, the impact distorting the earphone connection socket so that the play/pause inline remote buttons no longer work on regular earphones.

So what about the BeatsX? The new wireless earbuds from now-Apple-owned Beats? After years of whinging to anyone who’d listen about how bad Beats headphones sounded, I found myself extremely impressed with the Beats Solo3 headphones. Apple’s management has certainly paid dividends with regard to sound quality. (The previous association is still marked by the name in the Beats website’s URL: beatsbydre.com.)

Will they provide what I’m after in earphones?

These are earbud phones, with the earbuds tethered to each other and to the other working parts by a rubberised ribbon-shaped cable which Beats calls “Flex-Form”. Altogether they stretch 860mm from one end to the other, but the central section has a memorised bend which wraps it gently around the back of your neck. The earpieces are magnetised so they can hold each other, back to back, when not in use.

There are two 45mm long thickenings of the cable which sit just forward of one’s neck. The one on the right has a power/Bluetooth button, with a tiny LED in it, while the one on the left has a Lightning socket for charging. A short USB to Lightning cable is provided, but it’s assumed you’ll have your own power adaptor or computer to plug it into. I assume that the rechargeable batteries reside in those two thickened sections.

There’s also a line remote control about 120mm from the left earpiece with play/pause and volume up/down and a small hole for the microphone for hands free phone use. The play/pause button can also be used for answering and hanging up on calls and for talking things over with Siri.

Apple might have improved the sound of Beats, but happily it hasn’t tried to impose the hard, hurtful, insecure earbuds it provides with its own products on Beats. The BeatsX earbuds are tipped with soft silicon pieces which nicely conform to one’s ears. Three other sizes are also provided, along with clip-on “wings” which can be used to kind of hook the earbuds into the folds and bumps of your ears for greater security.

As it happens, the tips already fitted to the earpieces were the perfect size for me, and security was excellent so I felt no need to change anything.

Apple says that the battery will last for up to eight hours of use and has included a “Fast Fuel” feature which allows enough charge to be added in five minutes to last for two hours. I timed a full charge from empty as taking around forty minutes.

The earphones use Apple’s W1 chip, which also appears in the Beats Solo3 and the Apple AirPods. This allows quick automated pairing with Apple devices running iOS 10, and sharing of them across all devices attached to your account. But they can also be paired with any Bluetooth devices, such as my humble iPod Nano, along with Android phones, notebook computers and so on.

I could not find a word by Beats on its website about which audio codecs are supported. Normally I’d assume that no mention of AAC or aptX means that they rely on the more basic SBC alone, but since Apple is so keen on AAC, I suspect that is also likely supported.

A small pouch is provided for holding them. They are available in white, grey, black and blue.

To pair with your iOS device, you press the button on them for a second and then accept the popup on your iPhone (or whatever). I was unable to test this. I paired them first with the Nano in the conventional way, and even though I later made the Nano “Forget this Device” and tried various switching off and on strategies, the iPad Mini 4 wouldn’t respond in that way. Perhaps it’s a one-off when new.

Of course, pairing with the iPad Mini 4 was perfectly feasible, just using the conventional method through the Bluetooth menu.

In fact, I’m not so sure things like this feature or NFC in the Android world offer all that much. Years ago Bluetooth pairing was sometimes a fraught exercise, with great uncertainty whether it will work. But in recent years I’ve paired many dozens of things with iPhones and iPads and Android phones and tables and Windows computers and Macs, and I can’t remember the last time there was the slightest difficulty.

Well, there certainly wasn’t with the BeatsX, which I tried with several devices. Happily it remembered lots of them so I could use them with multiple devices. Principally, though, I used them with the Nano.

So did they turn out to be the perfect wireless earbuds?

No. No they did not. But they came so, so close, and stood out way ahead of every other set of Bluetooth earphones I’ve used so far.

Putting the Nano in my front left pocket always causes problems. But not with the BeatsX. Regardless of where I put the iPod Nano, the connection was rock solid. I could also walk fifty or sixty paces away from it before it would begin dropping out, and then when I’d turn around so I was facing the Nano (sitting on a rock in my front garden), the dropouts would stop and the connection became solid again. It turned out that the connection was weakest when the attached device was immediately to the rear of me, the user.

Then there’s the sound quality. Headphones and earbuds are difficult to design and tune because the goal is uncertain. Loudspeaker makers know what they want to achieve, at least in theory: their loudspeakers need to produce all tones at equal levels. That’s what everything is designed around.

But what we actually hear is modified by the distance between us and the source, the shapes of our heads and indeed our ears. Because headphones are delivering the sound from just millimetres away from our earholes, they have to adjust the tonal balance to make it sound natural. Earphones even more so, because they’re typically inserted several millimetres into the ear canals. A straight delivery with a flat frequency response will make them sound harsh and wearing.

Beats seems to have hit on just the right tonal balance in the BeatsX earphones. The bass was powerful and extended, although since it lacked the overblown character of many earphones, it initially seemed a little light. But I ran through a bunch of Eminem and Primus tracks, and there was no doubt, it was clean, strong and extended.

Just as importantly, there was none of that ear-piercing treble emphasis which can make so many earphones a very uncomfortable listen. Cymbals were strong and nicely bright and detailed, and most importantly, refrained from inflicting ear damage.

The result was a clear, natural, high fidelity sound performance.

Also nice, there was plenty of headroom. Even music which was encoded at a low level could be brought up to a good listening level. Combined with the excellent ear seals, there was plenty of opportunity to listen at high levels in complete isolation from the outside world.

So in what ways weren’t the BeatsX earphones perfect? Just a couple of practical things.

The volume control rocker was extremely effective, but even after a week of frequent use I found that way too often my attempts to use the play/pause button instead ended up changing the volume. I’d have to position my fingers very carefully and concentrate. And then when I tried to do things like a double-tap-and-hold to fast forward, I’d be successful about a quarter of the time, the rest of the time accidentally changing the volume or pausing playback or invoking the voice identification function of the Nano.

The other thing? No or ineffective warnings about a low battery. In general I’d be listening when, unexpectedly, the BeatsX would sound a tone and then stop. I think I did catch a warning once – it was a different tone and I saw that the LED was showing red rather than white. So I set the stop watch going and in seven minutes they switched themselves off.

A more effective warning system would be very useful. The quick charge is a nice feature but “Fast Fuel” isn’t of much use if you’re twenty minutes away from home, half way through your jog.

So, yes, imperfect, but so very close. I’d happily live with those minor issues, though, for the vital combination of a solid Bluetooth connection and very good sound.