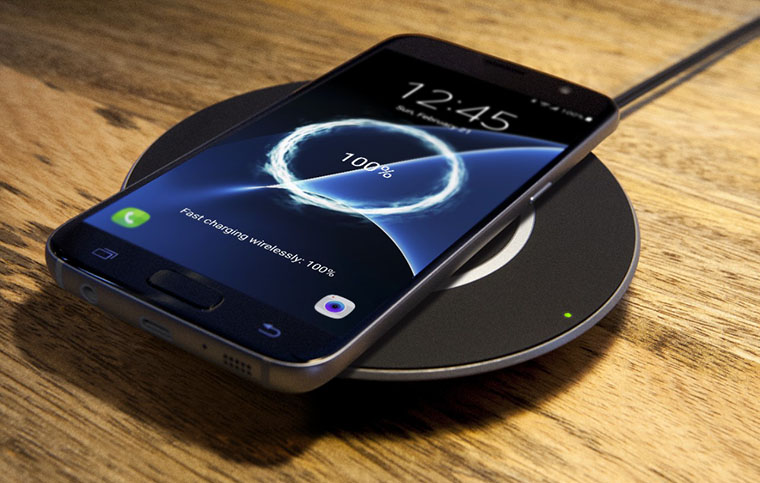 Perhaps I’m fussy, but if there’s one thing I hate most about Android phones, it’s plugging in the horrible charging connector. And that’s something you’ve got to do every day. The Micro-B USB plug and socket have to be perfectly aligned, and you need good eyesight to see which around the plug has to go. USB Type-C – still only on a small number of phones – is an improvement, but the ideal is wireless.

Now Belkin is out with the Belkin Boost Up Wireless Charging Pad, a more powerful wireless charger.

There are actually two wireless charging standards for phones: Qi and PMA. Some phones support both, some one, most neither. The Belkin Boost Up Wireless Charging Pad goes with Qi. Compatible with Qi are the Samsung Galaxy S6 family, the Galaxy S7 and S7 Edge – that is, the current models – the Galaxy Note 5 and the Moto Z and Moto Z Force. In addition, you can get Qi compatible “charging cases” for some iPhone models.

More on Qi shortly, but what about the Belkin Boost Up Wireless Charging Pad specifically?

This just looks like a flat disk, standing only 15mm above the desk surface and having a diameter of 115mm, or a touch smaller than that of a compact disc. It’s rather elegant with a matt dark grey surface and aluminium-look ring highlights. Belkin says that the surface grips the device. I wouldn’t go that far, but it is certainly not a slippery surface. It’s properly flat and the thing is very stable on the desk.

It has a wall wart style power supply with the cable fixed. The plug into the unit has a surround shaped to fit in pleasingly with the flying-saucer shape of the device’s underside. There are no cooling fans so operation is quiet. It just sits there and the only indication that it is doing anything is the green LED near the rim which lights up when a compatible phone is placed on the surface.

Of course, it makes the phone do something too, but we’ll return to that.

The unit can supply up to fifteen watts of power to the phone which, says Belkin, allows for faster charging. It says that most such devices are limited to five watts. It also says that it will charge through cases up to three millimetres thick.
Before using it, let’s find out a little about Qi works. A naïve implementation of wireless charging would be to have the pad generate a constantly changing magnetic field, which would then induce a current in any circuit within the field.

But a metal case of the kind fitted to Samsung phones, for example, would act as such a circuit so all the power would go to creating eddy currents within the aluminium case. A magnetic metal such as nickel or iron is not required for this. Any conductor will do.

So a naïve inductive mechanism is not good for this implementation. Instead, resonant inductive coupling is used. The magnetic field is varied continuously at a particular frequency resulting in very little effect on most nearby conductors, but which results in a resonance in an LC circuit (L is for inductance, C is for capacitance) tuned to the right frequency.

That’s what’s built into Qi compatible phones. The magnetic fields go right through the case, and tickle the reception circuit at just the right frequency to maximise transfer of power. That means that it’s safe to put other things on the charging pad. Unless they’re tuned quite precisely to the right resonant frequency they’ll receive effectively no transfer of power. In addition, the receiving device – the phone – can communicate back to the charging device its power requirements so it can control proceedings.

Well, the Boost Up Wireless Charging Pad certainly seemed safe. I put various metallic objects on it and nothing heated up. Indeed, nothing triggered it to switch on, evidenced by the LED remaining off. Later I tried putting a paper clip underneath a phone. The phone charged and the paperclip remained unaffected, apart from warming up to the same temperature as the pad’s surface and the back of the phone due to normal thermal conductance.

So I figure it’s pretty safe.

I used a Samsung Galaxy S6 and a Samsung Galaxy S7 for this test. I would have liked greater variety, but the Moto Z had already gone back and, well, what else is there that works with Qi? I did virtually all the testing with their side and rear protective cases on. The thickness at the back was in both cases around one millimetre.

As for operation, it couldn’t be any simpler. You plug the power pack into an outlet, plug the cable into the pad and then put the pad somewhere convenient. Then you can just put your phone on the pad whenever you’re there. A couple of times it wasn’t charging and I needed to adjust its position. It should be roughly centred on the pad.

Both pad and phone can get a bit warm as the charging proceeds, but no more so that the phones usually do when charging in the conventional way.

When you put the phone down the LED on the pad switches green and the phone’s lock screen lights up. With the two Samsung models they depicted what looked like an expanding smoke ring, indicating a connection. The phone’s battery indicator changed status to charging.

So how long does it take to charge up a phone? You won’t be surprised to hear that it’s nowhere near as fast as today’s modern fast charge wired systems. That said, it can proceed at a reasonable clip.

The S7 took 1 hour 56 minutes and 14 seconds to charge from 50% to 100% with the case on. If the battery indicator is accurate and has a linear relationship to charge, that would suggest that it took just under 140 seconds for each per cent. Without a cover it took, from 69%, 66 mins and 40 seconds to charge to 100%. It was somewhat warmer at the end of this cycle. That time would suggest just under 130 seconds for each per cent.

The theory suggests a closer proximity would increase efficiency which should translate to faster charging, but clearly there wasn’t that much in it. Probably not enough, anyway, to justify removing the case for charging.

The phones themselves offered forecasts of charging time which tended towards optimism. For example, at one point, when it was at 77% charged, the S6 said that it would be fully charged in 40 minutes. But after 37 minutes it had reached 94% charged and said that it still had 13 minutes to go.

One final thing: Qi is an active system. Unlike a regular wired charger, the unit won’t charge a phone that is switched off. The pad needs to be acknowledged by the device it is charging before it’ll do anything.

Look, if you’re worried about the amount of charge left in your phone’s battery and you have twenty minutes before you have to jump in an Uber for the airport, plug your phone in. Plug it into the charger that came with it, using the cable with it, and take advantage of its fast charge capabilities to pour in as much juice as possible.

But the rest of the time, it’s just so much easier to place the phone on the pad and let it quietly do its stuff and never have to muck around with those damned Micro-B USB cables again.

Overall
Features
Value for money
Performance
Ease of Use
Reader Rating0 Votes
Such much easier than charging cables, faster than most Qi pads, pleasant styling
4.8