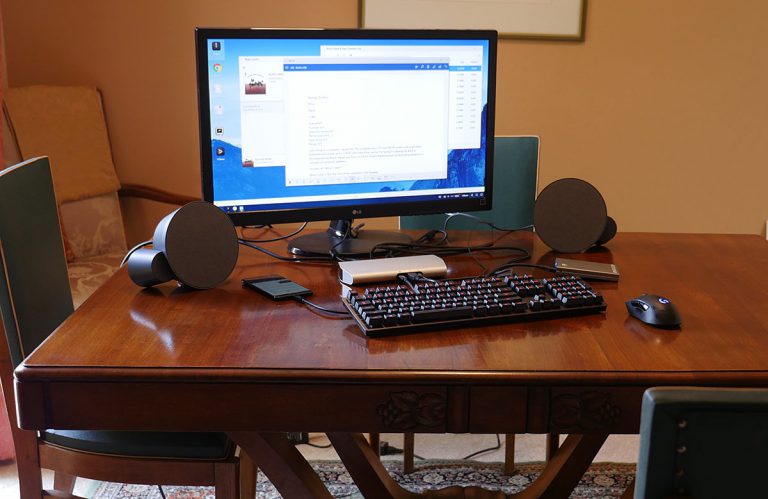 I am sitting at a computer typing this. This computer has a 27 inch full HD screen and an excellent keyboard and mouse, plus a 128GB solid state drive, and as I’m typing my work it’s playing Blood, Sweat and Tears (in Direct Stream Digital format, no less) on a nice pair of computer speakers.

What’s new is that the core of the computer is the Huawei Mate 10 phone I reviewed a few weeks back, and that all that connectivity is made possible by the Belkin USB 3.1 Express Dock HD (previously discussed here).

Before I go any further, let me be clear. You’re most likely to want this Belkin device to expand your USB Type-C equipped computer, especially if it’s a model with only one or two connections. But I didn’t have one of those to hand, time was running short, so I decided to use it with the phone. As I discussed in that review, the Huawei Mate 10 is one of the few phones that’s entirely dockable, even to the point of supporting an external monitor. I had one of those handy, so that’s what I’ve used.

So, the dock. One of the great things about USB Type-C is that while it can provide power to peripherals in the same way that USB has always allowed, you can also actually power the host device via that connection. An increasing number of computers (and phones, of course) allow this. To put it another way, a computer with a fully enabled USB Type-C port needs no other kind of physical connection.

So you plug your computer or phone into the front USB Type-C port on this dock – you can use the one metre USB-C to USB-C cable included with the dock – and plug the dock into a power point. It has a small brick power supply with what seems to be a proprietary power plug. This is reversible and easily inserted and removed. In addition to providing a communication channel with the dock, this connection powers the computer or phone. Indeed, it can provide up to sixty watts of power in total. It will also power the peripherals plugged into its other ports, and intelligently manage the power distribution to connected devices.

Then you plug all manner of other stuff into the Dock. There’s a USB 3.0 port on the front and two more on the back. You can use those for things like keyboards, mouses, hard drives and so on. There’s also a USB Type-C port on the back. A HDMI output can be used to connect a second display for your computer (or phone, if the phone supports it). Also on the back is a headphone or speaker output (3.5mm) while on the front is a combo headphone/microphone 3.5mm socket. The dock has both analogue to digital and digital to analogue audio converters built in. Finally, also on the back is a gigabit-rated Ethernet port.

All this is in a neat, flattish unit, some 21cm wide and 3cm tall, with an aluminium finish and four soft feet to protect your desk top. It will work with PCs and Macs, and you’ll be able to charge and expand many USB Type-C smart phones, and turn some special smart phones into full function computers.

As mentioned, I’m drafting this review with a Huawei Mate 10 phone which has been expanded, by means of the Belkin dock into pretty much a full fledged computer. Who needs a Samsung Galaxy S8 with a DeX docking station? You can just leave the Belkin on your desk with the keyboard, mouse, hard drive and monitor all plugged in, ready to go. Plug in the Mate 10 and after a few seconds its desktop appears on the monitor.

Look, a smart phone doesn’t run as powerful or fast a processor as a typical computer, but for general activities it’s fine. The main problem with a phone isn’t the processor, it’s the input and output and, possibly, the storage. And that’s what a dock allows you to upgrade.

So for input, I’ve got the Logitech G413 Carbon Gaming keyboard plugged in. There’s simply no app or touch interface that bears any comparison with a keyboard like this for speed of text entry. The USB receiver for the Logitech G703 gaming mouse is also plugged in and that makes the desktop displayed on the monitor entirely usable. I keep some fancy music on a 128GB SSD, repurposed from being the C: drive of an older computer into a portable drive, so that’s plugged in as well. That drive also serves as storage backup for the phone. An LG 27 inch full HD monitor provides the visual output, while Logitech MX speakers provide the sound.

The only aspect of the Belkin Dock I can’t use is the Ethernet port because the Huawei phone doesn’t include the necessary drivers.

That apart, it all worked smoothly. The phone is fully charged and staying that way because of the power supplied by the Belkin Dock. The two virtual drives on the SSD are available to the phone, accessible via the Files app on the phone (which runs on the external display’s desktop). The music sounds respectable.

In other worse, the Belkin USB 3.1 Express Dock HD is doing precisely what it should do: providing power and managing communications between devices, and not in any way drawing attention to itself. All that remains for me to do is to recommend this device for anyone who wishes to expand the connectivity, and potentially charge, their USB Type-C device. You can purchase from major retailers, or direct from Belkin here.