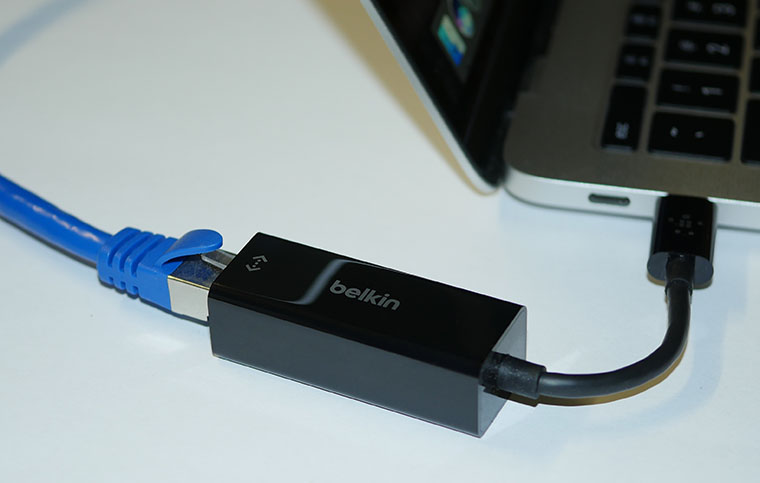 Ultra thin notebooks have come with at least one cost: just about none of them have an Ethernet port.

“Get with the times, Bartlett!” some will proclaim, “The whole world’s WiFi these days.” Perhaps. But let me assert that having a wired Ethernet connection can be very useful at times. I’ll return to that point shortly.

So assuming my assertion is correct, how do you add Ethernet to computer? The simplest way is to use a USB adaptor. And since USB Type-C is the way of the future, I asked Belkin if it could supply its “USB-C to Gigabit Ethernet Adapter” for review.

USB Type-C, USB-C: both mean the same thing. On one end of a short cable is a USB Type-C plug. USB Type-C is just the plug design, not necessarily the signal format. At this point USB Type-C typically handles USB 3.0 or USB 3.1 data. But Version 3 of the Thunderbolt standard, developed by Intel and first widely deployed by Apple, is also supported by some USB Type-C systems. Some, not all.

The Belkin adaptor does not require that. Any standard USB Type-C port will do.

Some of the advantages claimed or USB Type-C are higher data throughput and sometimes support for Thunderbolt 3. But the things I most like about USB Type-C are that the plug is reversible – either way up will do – and easy to insert, unlike every previous form of USB.

At the other end of the cable is an Ethernet socket encased in a shiny black plastic case. The whole thing is 15cm long and will use just about no room in your computer carry bag.

There are a variety of Ethernet standards. The important point is that this adaptor supports Gigabit Ethernet. That is 1000BASE-T, with up to a notional 1000 megabits per second throughput. Lesser Ethernet connections support only one tenth of that. So always choose gigabit.

It has a two year warranty.

I tried the unit with both a new MacBook Pro and with a Windows computer equipped with USB Type-C. In both cases it was just a matter of plugging it into the USB Type-C port. And then, after a few seconds, it was working. No drivers were needed for either platform.

My WiFi router is an 802.11ac compatible unit, allegedly capable of supporting up to 300Mbps over the 2.4GHz band and 867Mbps over the 5GHz band. I copied the file from the server to the MacBook Pro’s desktop. The MacBook Pro was about two metres from the WiFi router, with some computer monitors and loudspeakers in between them.

Via WiFi, the file copied to the MacBook Pro in 34.21 seconds, which works out to 310Mbps. If your router offers faster 802.11ac speeds and your connection is more direct, your system may exceed that speed.

Via the Belkin adaptor, connected via Ethernet, the copy took 12.7 seconds, which works out to 836Mbps. Or well over twice as fast.

The same file copied to my Ethernet-connected Windows desktop computer was slightly faster at 12.15 seconds. That’s 876Mbps. I wouldn’t quibble over the difference.

So one reason for purchasing this adaptor is the speed increase: twice, verging on three times, faster.

The other? What if you are visiting an institution which is loath to share its WiFi passwords but is happy for you to connect via wire? What if you’re in a hotel which has both WiFi and Ethernet, but the access point for the former is so far away as to result in a dicky connection? What if some system resources seem inaccessible via a WiFi connection? Wouldn’t it be nice to have the ability to connect via Ethernet to see if that works better?

Overall
Features
Value for money
Performance
Ease of Use
Reader Rating0 Votes
Lets you plug in when Ethernet is available; typically faster than most WiFi setups
Nil
5