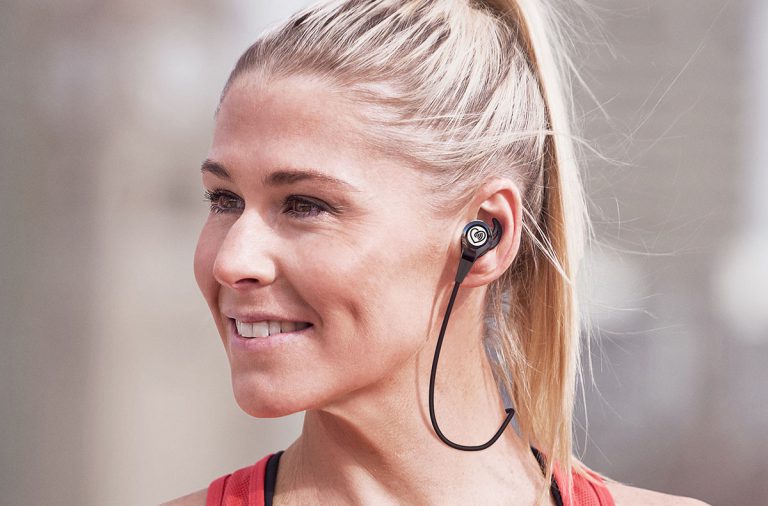 Measuring your heart rate is a vitally important part of modern exercise management, but how do you do that? Some devices shine a light through the skin of your wrist and sense things that way. That can be iffy. The most reliable is with a chest strap monitor. But that’s not necessarily comfortable, let alone sightly.

The BioConnected HR+ Biosensing Sports Earphones do the job by measuring your pulse in your ears. Oh, and they play music as well.

Plus the earphones can give you spoken prompts, telling you stuff you need to know without you having to look at the phone.

Speaking of which, you’re probably going to get the most from the HR+ if you use the BioConnected App. Obviously it works most effectively with them. And at this stage that’s iOS only.

But the heart rate data is compatible with a range of third party apps on both iOS and Android, so you can use it with them. I concentrated on iOS (using an iPad Mini 4 as the platform, not having an iPhone available).

Of course, they connect to your device via Bluetooth. They incorporate a “Clinical-Grade heart rate monitor” in the right earpiece. The two earpieces are joined by around 600mm of cable, with a three button control pod not far from the right hand earpiece. It has a microphone for hands free calls and interaction with Siri.

The control pod is lighter than usual because the two 60mAh batteries are, I think, in the earpieces themselves. A clamp on the cable allows it to be shortened so as to sit better against one’s neck. The whole thing weighs just 17 grams.

Within each earpiece is an 8.6mm driver. The batteries are rated to last seven hours and the earphones are IPX5 “water and sweat resistant”. They have a lifetime guarantee. Charging time is two hours.

Three sizes of silicon tips are provided for them, along with three different sizes of fins to sit in the whorls and grooves of one’s ears, holding them steady. The fins aren’t optional unless you commit surgery on them. They are part of silicon covers which help protect the earphones from your sweat. The right hand one actually covers the Micro-B USB port used for charging. To charge you pull back a fair chunk of the silicon sheath. It sounds ungainly, but it works and is no worse than any other protective arrangement for Micro-B USB ports, and better than most.

When I paired the HR+ with the iPad, it appeared as two devices. One was “BioConnected HR+” – that was the audio device – while the other was called “Heart Rate”. They are quite separate, although in practice they work as one.

Since I’d already installed the free BioConnected app, there was little setup. The App identified the earphones pretty much straight away, and then took me through a profile setup. It was interested mostly in my sex, weight, height and age. The stuff, in other words, any health-related app wants to know about.

The standard screen shows your heartrate. This seems to take a few minutes to settle down. When I plugged the earphones in again a moment ago, as I’m now writing, it showed my current heart rate as a slightly alarming 136. My Fitbit Ionic said 62. I measured my pulse the old fashioned way and got 60-64. But while I was doing that, the Bioconnected app indicator fell back down to 61.

Anyway, that’s jumping ahead a little. There’s a hamburger menu at top left that allows you to access settings, not least those for deciding the kinds of units you want. They even include Joules as an alternative to Calories for energy. Take that Fitbit!

And there’s a page for tech stuff about the HR+ earphones. It’s from here you can check whether the firmware is up to date. It wasn’t. When I asked it to update, it downloaded the relevant file and started feeding it to the earphones. I watched it do so. After having transferred less than one percent of the necessary data it indicated a remaining time of one hour and thirteen minutes. There was a nice big abort button, which I used. Later after some initial testing, and when I didn’t need to use the earphones for a couple of hours, I started the process again and just let it go. It completed at some point within an hour or two.

At the bottom right of the app are buttons for controlling sound. One jumps you straight to the Music app so you can start things playing, while the other takes you to a page to set your preferences with regard to audio feedback.

Bottom left is about exercise. A button lets you set that to Run, Cycling, Walk, Cross Fit, Gym, Running Heart Fitness Test, and Heart and Mind. The icon for that last one had a stylised person in a cross-legged meditation pose. Feel free to explore that kind of thing on your own. I stuck with Run and Walk.

You choose the exercise you want, then tap the “Play” button to start recording.

While you’re exercising, the app shows various bits of information. You get to choose some of them. Basically, they boil down to elapsed time, distance covered, current cadence (number of steps per minute), current heart rate, average heart rate, number of steps, split speed and energy consumed. Obviously much of that is provided by the app using the phone’s sensors – including GPS, with an indicator at top right showing GPS connection status – and some (energy, for example) is calculated using a model to apply the movement and heart rate data to your weight and age.

When you’re done, you press the red stop button and you’re presented with a map – in my case, it was a route, but with no background so it was not clear where it took place – and a summary of all that information. You can touch each item to show a fairly detailed graph with the readings across the course of the exercise.

And after having written that about the absence of the map, I now realise that the reason was I didn’t have a SIM in the iPad, so it had no Internet connectivity. Now that the iPad is in my office, connected to WiFi, I can go back and review that exercise session and see that the map has since been put in place underneath the route.

During my walks and my run, the music played nicely, interrupted ever two minutes by a somewhat uncanny-valley-ish female voice announcing half a dozen statistics: average heart rate, speed, steps and so on.

Of course, you can switch that off if you like, and if you like to let your consciousness fade away into the haze of the music when you’re exercising, no doubt you’ll do that. But if your focus is on achieving milestones in your exercise, this is a great way of doing it without having to do foolishly dangerous things like look at your phone’s screen while cycling.

Again, during my exercising I used both the HR+ and BioConnected app, and a Fitbit Ionic. Did they give the same results? No.

On one 28 minute walk, the HR+ had me at an average heart rate of 113, versus 119 for the Ionic, with a peak of 137, versus the Ionic’s 131. I think the average for the BioConnected app was pulled down because I changed the display from average heart rate to current heart rate for the last eighth or so of the walk, and it settled on an unrealistically low figure of 86. And remained there, even though I intentionally jogged the rest of the way to force my heart rate up.

BioConnected had me using 187 calories versus 289 calories, but I suspect Fitbit’s algorithm includes underlying metabolic calorie burning, along with the additional stuff due to the exercise.

BioConnected had me travelling 2.60 kilometres, Ionic 2.57. That’s pretty close, as you’d expect since it’s based on the physics of GPS, not estimates subject to the physiology of individual human bodies. Finally, Bioconnected had me walking 3457 steps, while Fitbit had me only going 3315. Again, different algorithms.

Look, if you’re conducting scientific research, you’re going to be after lab grade equipment. For modestly priced consumer gear, it seems to me that both of these were close enough to the same. (Just don’t fiddle with the heartrate display mid-exercise.)

I’ve spent so much time on the measurement side of things that I’ve overlooked sound.

First, after my initial reluctance, I’ve become somewhat of a fan of fins or wings on earphones, to the point where I’m checking the boxes for some of the other earbuds I use to see if they have them. The do tend to hold the earbuds in place.

The HR+ provided a modest seal, good enough to provide a respectable bass performance and to keep out most external noise. They tended a little towards brightness, although not aggressively so. In fact, they made for a musical, enjoyable, middle of the road kind of sound that worked well when I was out and about, with plenty of volume and plenty gain.

The BioConnected  HR+ Biosensing Sports Earphones aren’t just about listening to music while you’re exercising. They are provide part of the body monitoring that allows real management of your exercise program.