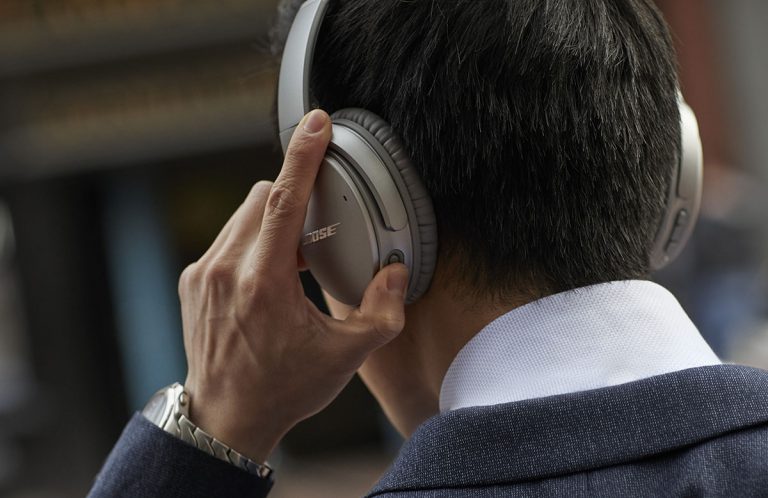 As we mentioned a few weeks ago, Bose has updated its QuietComfort 35 headphones. Now they’re the QuietComfort 35 II noise cancelling headphones. As with the model they replace (which we reviewed here), they are Bluetooth models, but with some significant upgrades. I’ve had the new model clamped over my head for many, many hours over the past week. What did I find?

What I found startled me. I will get to what it was that startled me soon, but first some facts and figures.

Well, actually, there aren’t too many. Bose is one of those companies that doesn’t like to talk about specifications. Power output? Like Rolls Royce, it’s sufficient. Speaker drivers? Heh, it’s Bose, so the details don’t matter. Check out the website and you’ll find their size – which is kind of the same as most headphones – their weight, which is 310 grams – and the lengths of the audio and USB cables supplied with them. Frequency response? Sufficient, I guess.

More importantly, codec? Since nothing is mentioned, we’ll have to assume the basic SBC codec and not aptX or aptX HD or AAC. Bose is not listed on the aptX website amongst the brands using its technology.

So, for really serious listening, you’ll be wanting to plug in. But, to be fair, the limitations on quality due to the SBC codec are usually not too dire.

It was a little quick in dismissing the dimensions. How big a set of headphones are when planted on your head generally doesn’t matter much. But these headphones fold up nicely to go into their semi-hard carry case. Because the earcups swivel before you fold them up, the case ends up only 50mm thick and so fits into brief cases and such reasonably well. Better than most headphones.

They are over-ear models with closed backs, so you get some isolation from external noise. The active noise reduction works in the usual way: environmental sound is captured, adjusted, inverted and fed back into the signal to cancel the original noise. Bose says that there are microphones both outside and inside the earcups.

On the right ear cup is a physical power switch. It slides on and off, and pushed a step further it engages pairing mode. Behind the right ear cup is the volume up and down rocker with an indented play/pause control in the middle. I found it easy to start using this reliably.

That play/pause also works for fast forward and rewind, track skipping and so on by the usual double and triple presses and holds. It also works to answer calls, hang up and so on.

On the left earcup is a single button. Using the Bose Connect app (iOS or Android) it can be assigned to controlling the level of noise cancellation, or invoking Google Assistant (not Siri).

The headphones work without power, but of course require a wired connection in that case.

Bose says that the battery is good for twenty hours of operation, and that a fifteen minute top up of power via the Micro-B USB socket will deliver another 2.5 hours of performance.

One way to start listening is to just plug it in. The audio cable is 1.2 metres in length (the specifications helpfully inform us). At the headphone end is a 2.5mm plug. At the other is a standard three-conductor 3.5mm plug. The cable is quite thin and is clearly not designed for hands free operation, nor for any kind of volume control.

Incidentally, unlike past Bose practice, there is no two pin airplane adaptor included.

But normally you’ll connect with Bluetooth. You can pair the usual manual way. You can pair via NFC – tapping an NFC capable phone on the front of the right ear cup and then confirming it on the phone. That worked with both a Samsung Galaxy S7 and a Huawei Mate 9. But you’ll probably want to pair using the “Bose Connect” app which allows you to make settings, handles firmware updates and can change the function of the left cup switch between Google Assistant and Noise Cancellation control.

All these ways worked quite well. I did manage to get the headphones confused at one point – although arguably it was me who was confused, since I wasn’t certain quite which devices I had at some point paired – and I could no longer get NFC to work. But there’s a simple method to purge all connections (you’ll need to download the proper manual from the Bose website) and all was fine thereafter.

And I’ve decided that the Bose QuietComfort 35 II noise cancelling headphones are by far the best I’ve ever used. They are amongst the best for sound quality, and enormously better with noise cancellation. Amazingly so.

Last week I was agitated. I knew the headphones were coming for review. And I was flying on Wednesday and Thursday, so it would have been the ideal test. Sadly, they didn’t arrive in time. So I did the next best real world test. I mowed the lawn.

The noise cancellation delivered by these headphones was wide ranging in frequency and very, very deep. While mowing I could listen to music at a very low level, and hear it all with complete clarity. The sound of the lawnmower disappeared to the gentlest of hums.

It’s hard to convey how extremely well they quietened everything.

Sharp impulses? I can barely hear my own typing, even though I’m pounding away in my customary unrestrained manner on a mechanical keyboard. Even rapping the metal handle of a heavy fork on the glass top of my desk barely breaks through unless I get quite violent.

All that was with the noise reduction at the higher level. At the low level the noise was increased to a gentle background level, with music and voice from the material I was listening to still easily audible over the noise.

No plane, but I could fake it. I’ve got a video recording I took in a plane in my accustomed rear seat. I played it on my desktop computer and wound up the volume to 95dB average (C-weighted). I have a very good sound system on my desktop, with solid bass down to 30 hertz so the result was pretty realistic. The results were the same as with the lawnmower. The all-encompassing noise faded to a hearable but eminently ignorable level. With a creepy side-effect. I could hear other things from my flight. I could now hear the food trolley. Something being dropped. And the soft tinkle of voices. Not clearly enough to make out what was being said, but they were clearly voices. All that was completely inaudible without noise reduction.

There was a very slight sense of ear pressure with the noise cancellation on high. That’s a feeling I often experience with noise reducing headphones. If feels like the pressure on your eardrums is slightly higher than the pressure inside. It is mild and disappears the moment you start listening to music, and is completely unnoticeable when there’s significant external noise.

At the highest level the noise reduction also generated a little bit of barely audible hiss. Again, noise on the outside or music on the inside effectively eliminated this.

The headphones give plentiful, sometimes excessive, voice feedback. When you change the level of noise cancellation a female voice tells you the level. If you press a button that causes a connection, or slide the power switch briefly over the Bluetooth position, the voice tells you the name of the connected device. The pronunciation of “Huawei” was hilarious. It also keeps you informed of battery level, which was particularly welcome.

The sound quality was good to very good. Some Bose headphones have been a bit too full in the bass in the past. These were nicely balanced. Listening critically with a cable connection to the highest quality music, they didn’t have quite the sense of openness and “being there” as my preferred $700 wired headphones deliver. But falling short of them is no shame.

In fact, they sounded fine: musical, certainly adequately detailed, and voice was very clear. Treble was extended, the depth of bass was impressively vast. But, you know, even though Bose points out that without power you’re not getting the benefit of the EQ, I thought there was noticeably higher transparency and openness to the sound when played via a wired connection with the headphones switched off.

With their own Bluetooth connection there was plenty of gain available from the headphones so there was never any problem with insufficient volume levels.

If the battery runs down – or even if it doesn’t – you can still use the headphones via the wired connection. If you’re doing that some of the functionality goes away, even when there’s power in the headphones. If you have the headphone switched off, then of course there’s no noise cancellation (nor any of the standard EQ). If you have them on, and there is power, then the noise cancellation is locked onto the maximum position. It can’t be turned to the lower level.

Nor indeed does the volume control work when wired, even though the internal amplifiers must be running in order to run the noise cancellation.

I guess Bose is effectively saying that you’re only going wired if you’ve run out of power, or you’re on a plane and will thus need full noise cancellation.

I have no quibbles with the battery life claims. One negative aspect of the design is that the noise cancellation circuitry won’t work while the headphones are being charged. When on a very long flight, you might want to take the opportunity to plug them in for a top up whenever you’re taking a rest room break.

The Google Assistant function worked very nicely. But in the end I like to be able to readily control the noise cancellation level so I returned the control button to that function.

Finally, I fluked an experience of the dual connection capability. I was listening to something being delivered by my iPod Nano when my Samsung phone rang. The headphones paused the Nano, and I was able to take the call using the headphones as though the phone was the primary connection. When it finished, I pressed the play/pause button and the Nano content resumed from where it had left off.

The Bose QuietComfort II headphones are very effective Bluetooth headphones with the best ever noise cancellation. The best ever. I love them.