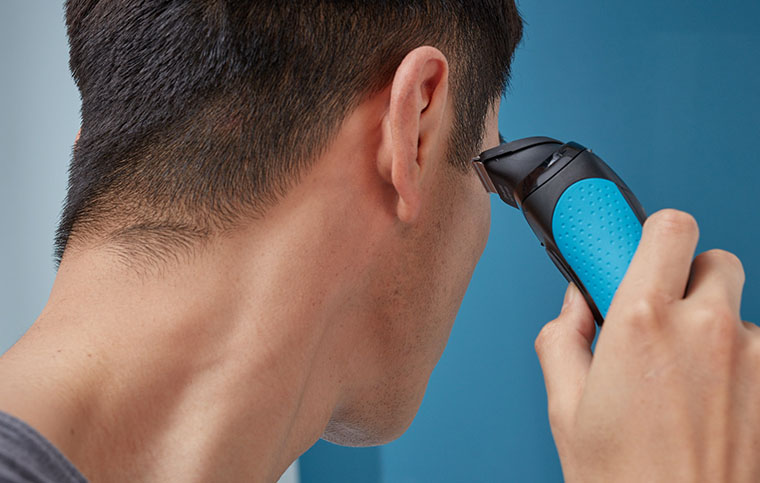 Most of we guys have two kinds of hairs that need to be controlled: those which are short and can be shaved, and those which are long and need to be trimmed. One device to do both has got to be welcome. Heck, I have one. But the trimmer kind of pops out from the side so you can’t see it in action, making it useless for any kind of precision work.

What attracted my interest in the Braun S3 Shave & Style (Model 3010BT Wet&Dry) is that the shaving head and trimmer head are interchangeable, and with the latter attached, it looks like a proper trimmer of the kind you’d see in a barber shop.

As the formal model name suggests, the Braun S3 shaver is a wet and dry unit – perfectly comfortable in the shower. It’s powered by NiMH batteries. The shaver head has three “foils”, which is to say three cutting elements. Electric shavers work by having thin, metal elements with holes in them, and moving parts inside to push one’s hairs against the sharp edges of the holes to cut them off.

The two outer cutting elements are fairly standard. Braun says that they are “Specially designed foils for closeness and skin gentleness”, although I’m not sure what design parameters would permit gentleness. They are independently sprung so that they can “adapt to every facial contour”. The centre one has a different shape and is designed to “cut difficult hair”.

The head is a single unit which can’t be dismantled. You clean it by brushing the outside or running water through it, adding a touch of lubricant in the latter case. Braun says that the head’s life is around 18 months. I imagine that would depend on your usage frequency and the nature of your beard. It attaches both ways around.

Likewise for the trimmer attachment, so you can have the natural curve of the power section and head bending either way. The trimmer uses the standard system of two metal combs, the slightly recessed one sliding under power beneath the top one. It comes with five slip on combs to provide cut heights of 1mm, 2mm, 3mm, 5mm and 7mm. The latter is a little over a quarter inch. They slide on and off easily and their sizes are clearly marked.

With either head the unit works wet and dry, including in the shower. The unit is IPX7 rated – which means you can drop it into a metre of water for half an hour.

A small cloth “travel” pouch comes with the system. This will accommodate the combs, trimmer head, a small brush which is included and the power pack. A clip-on cover is provided to protect the cutting element while it’s on the shaver. This also covers the on/off button so it won’t switch on accidentally in your luggage.

The Nickel Metal Hydride battery is rated at 45 minutes of use, and takes one hour to charge. When flat, a five minute charge adds enough for a single shave.

Sadly I look nothing like that intimidatingly handsome chap at the top of this page. My facial hair is of medium thickness which can present its own difficulties to a shaver. In particular, there’s this little spot under my jaw bone, just to the left of my chin, which no electric shaver I’ve ever used can clear successfully if left untended for a couple of days.

The Braun shaver did a fine job over all my face except for that spot, usually providing a very smooth finish with just two or three sweeps. That patch, though, it handled no better, nor any worse, than any other electric shaver. Even German engineering can be defeated by weirdly flattened hairs against soft flesh.

But that’s one good use for the trimmer. The shaver head pulls off quite easily and reattaches without one having to particularly precise in aligning the inner workings. Likewise the trimmer. I could pop that on and swipe across that troublesome spot with one or two strokes, removing the tops of those hairs. Then back to the shaver head for a cleanup and it was done.

The ability to see the trimmer head clearly in the mirror made other trimming jobs – around the ears, for example – much easier than usual. With combs attached it couldn’t quite match my ancient mains-powered, barber-style Wahl-based Breville cutter for cutting hair in bulk, and it isn’t really designed for that job. Nonetheless, it could do that, just a little more slowly.

Braun boasts on the website that it’ll do all that trimming with no “tug and pull”. I can report that not once did my hairs feel tugged, neither did they feel pulled. In other words, the trimmer cut cleanly and with certainty, not catching even fine hairs between its rows of teeth. Braun says that the “trimmer blades are engineered to stay sharp for their whole life”.

I’m not much of a one for shower shaving, but I dutifully gave it a whirl. I mustn’t have had the right kind of gel because the shaving experience was accompanied by a squeaky friction of metal on skin that I found discomforting. Each to their own.

All the sexy gear these days uses Lithium Ion or Polymer batteries, doesn’t it? But a smart engineer chooses the technology that suits the job at hand. There’s plenty of space in a shaver and the power demands aren’t enormous, and Nickel Metal Hydride is effective and safe, so that’s what Braun has put into the shaver. So how long does it last?

I confess, I’m not sure. I’ve been keen to get this review up for over a week and have been putting it off, waiting for the first charge of the battery to run out. It hasn’t yet. I’ve shaved with it at least every day for the past ten days. I’ve trimmed things several times, not least my chin beard and side burns. Those, in fact, I cut right back with the 1mm comb. There’s that little misbehaving patch which has also demanded the use of the trimmer each couple of days, too. And still the battery has yet to expire.

I should, I guess, have fired up my stopwatch each time to come up with a figure, but I didn’t. So what I’ll say is that you’re not going to run into problems with it running out if you establish a reasonable charging routine – say once a week or whatever works for you.

A LED lights when the battery is almost run down. The manual says that when it comes on “You should be able to finish your shave”. I guess they can’t promise too much certainty because one never knows how much of a shaving task the thing will be facing. NiMH battery discharge characteristics don’t help, either. Unlike alkaline batteries, instead of a smooth flattened-S discharge curve, they maintain an almost constant voltage output under load until just about exhausted, and then drop off very rapidly. That makes the end hard to predict.

At $159, I reckon the Braun S3 Shave & Style is a very good performer at an excellent price.