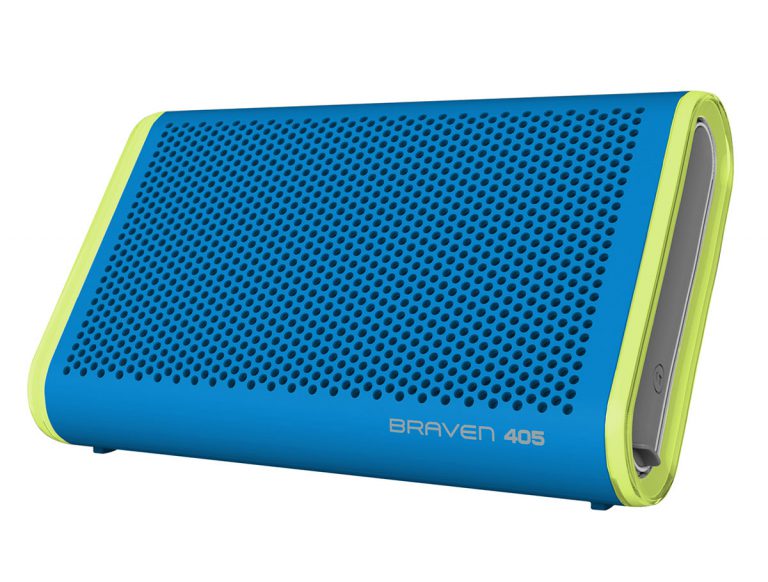 Braven is a company which has been around for a few years, but some reason I haven’t laid hands – nor ears – on any of its products until now. It produces portable Bluetooth speakers and earbuds. Here I’m looking at the compact Braven 405 Bluetooth speaker.

This is one of those rubberised water resistant models with an IP67 rating. That means totally safe against dust, and proof against immersion for up to half an hour for up to one metre. That in turn means if you drop it in the pool, all ought to be fine if you scoop it out quickly. Braven also says that it has a “Shockproof Sport Exterior”, so I guess it ought to survive moderate bumps.

Compact? Yes. It’s 150mm wide, nearly 92mm tall and 30mm thick. It weighs 292 grams, so not an undue imposition if you want to take it to a picnic or whatnot. It’s available in nine colours, including four on the grey scale and five bright and cheerful. Some of them have contrasting end caps.

At the back is a kick stand so that the main face of the speaker, where the drivers are sited, “fires” somewhat upwards at about a sixty degree angle. Within the face are two “HD” drivers and a passive radiator. The latter is a bit of acoustic magic that is very useful for tuning the bass performance of loudspeakers, allowing them to produce more bass than most other enclosure designs.

There is also a built in microphone so that if it’s paired with a phone, you can use the unit as a speaker phone.

It is powered by a 2100mAh battery, which you charge via a Micro-B USB socket. That resides under a rubber cap that covers most of the right side. Also under that is a standard USB-B socket which you can use to power your phone or music player and a 3.5mm analogue input (so you can use it if you have a still working iPod Classic).

There’s also a system reset button and a power check button there. The latter makes a ring of up to ten LEDs briefly illuminate around the edge. Each pair indicates twenty per cent battery capacity available. There’s also a warning ten minutes before the battery expires.

The other end has large power/standby button, play/pause, volume up and volume down buttons.

The manual is brief but clear enough if your eyesight is good for small print. Everything is covered, including “360 degree audio”. For that, you  place the speaker flat and have it firing upwards, rather than using the kick stand to prop it up.

I’m always interested in how much bass these little speakers can generate – and how deep the bass can go. Playing a range of rock music, it was clear that there was nothing particularly deep there, as you’d expect. Nonetheless there was enough musically significant bass to give a surprisingly good rhythmic feel to the music. To take a well known track, the bass drone in Coolio’s “Gangsta’s Paradise” was actually delivered in a way that gave a real sense of the feel of the music, while the drum track was also decently powered. Sometimes that bass – especially during otherwise quieter parts of the track – seemed to get down towards rumble territory.

The trick was the way the passive radiator seemed to couple with the whole body of the speaker, seeming to make it vibrate in sympathy, increasing the radiation area. Perhaps. However it was achieved, the result was impressive.

The whole thing was helped by a smooth midrange and reasonable treble that was neither emphasised nor recessed. In short, the speaker was nicely musical. And it went surprisingly loud. A touch too loud for comfort at maximum volume when it was on my desk right next to me, although that was stressing the speaker a little too, increasing distortion noticeably. Down a couple of notches it was comfortable.

I measured the output at the bass end to reveal bass performance more objectively. The output was perfectly even down to 275 hertz, when it began to reduce a little to be down by three decibels at 220 hertz, six at 150 hertz and nine at 115 hertz. Not too bad at all.

The speaker preserves its battery by switching itself off after half an hour of non-use. It sounds a tone when it switches off.

The rubbery end cap seemed to seal the inputs up fairly well, but it was a bit fiddly. If water is possibly in the speaker’s near future, double checking the cap would be a good idea.

Battery life? I wouldn’t quibble too much at all with the 24 hour claim. I played it louder than most and still managed to get over twenty hours.

The Braven 405 is a fun, good sounding and seemingly robust little Bluetooth speaker with an excellent battery life. The ability to provide power to the phone or whatever is also a real benefit.