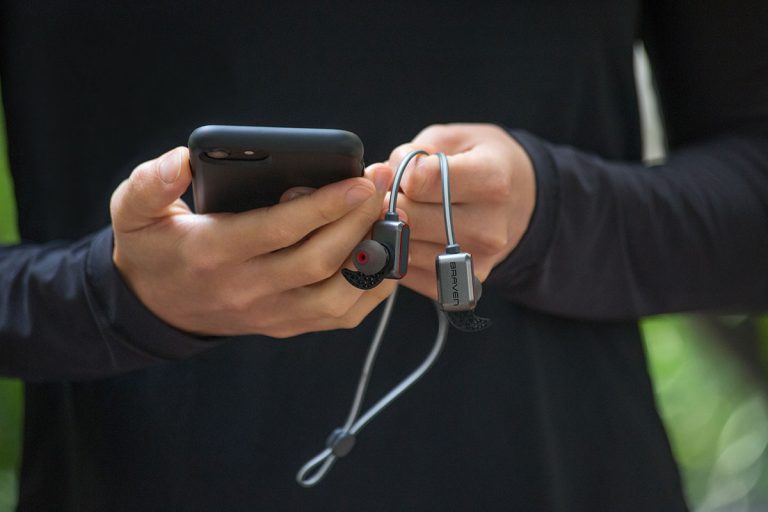 There are diametrically opposed design requirements for Bluetooth earphones. You want them to last as long as possible before requiring a recharge. But you want them to be as light as possible, for comfortable and secure wear. For a long life, they need a big battery. For a light weight, they need a small battery. And that’s a problem.

Braven has overcome that conflict be providing both big and small batteries for the Braven Flye Sport Reflect earphones.

It manages this by supplying the earphones with a kind of combined power bank and recharging dock. The earphones have a 500mm cable connecting them, with the usual control pod near one of the ear pieces (the right hand one in this case). The pod has the usual Micro-B USB port (but more on that shortly), but it also has two electrical contacts on its back. The whole pod clips onto the power bank and charges from it.

The power bank is small – 72mm by 48mm by 12mm – and light in weight – 43 grams by my scales. That’s way too heavy to be hanging out of your ears, but pocketable to the point of being almost unnoticeable. According to the press material, the power bank has an 1100mAh capacity. The Flye Sport Reflect earphones are advertised as having a 25 hour battery life, including being recharged four times from the bank. Each charge is good for five hours of operation.

The battery pack has four LEDs on the front to indicate its charge status, along with a Micro-B USB port for it to be charged up, and a standard USB Type-A socket, which allows you to charge up other devices. Could be good for an emergency situation to add a little charge to a phone, although the capacity is insufficient to fully recharge one. This charging capability seems to be a Braven thing, fitted to its portable speakers as well (see here, and here, and most recently here).

As for the earphones, the control pod is held in an indent quite precisely by magnets, and these are orientated such that it can’t really be put in the wrong way around.

So, that’s power. How about the earphones themselves? The whole set weigh 14 grams, and each ear piece around six grams. Their bodies are small rectangular pods with a set of three sizes of silicon tips provided. Also included are two sets of wings or fins which can be used to help “lock” the ear pieces in place by resting in the ripples and whirls of one’s ears, and ear hooks for wrapping around their outsides. Use of any of those is optional. There’s also a water resistant zip pouch, a USB charge cable, and an analogue audio cable we’ll get to shortly.

The cable connecting the ear pieces is covered with a reflective material – thus the name – which made them quite visible after dark. There are two finishes available, a dark gun metal grey with red trim, and a lighter grey with green trim. The control pod also has a microphone so you can use it for hands free calling.

Braven doesn’t really provide any specifications for the earphones, other than the battery life claims.

Let’s look at a few practicalities before getting to the sound.

The buttons on the control pod were nicely raised and reasonably easy to push, so operation by touch was a snap.

A neutral female voice is used sparingly for notifications: power on, maximum volume, low battery. It sounds like an eight bit recording, with plenty of background noise.

I wouldn’t quibble with the battery life claims. The scratchy voice warned me several times that the battery was low, lasting maybe ten or fifteen minutes from the first warning before switching off. There was no indication of charge status for the earphones themselves prior to that time.

Once depleted, I put the earphones in their spot on the power bank and started the stop watch going. When I went to check progress, seventy minutes had elapsed and the earphones were fully charged. For how long, I don’t know.

So what happens when all the batteries are empty, including the power bank? These earphones turn out to be unique so far in my experience: you can continue to use them via an analogue connection. As I mentioned, there is a Micro-B USB socket on the control pod for charging, although you’ll rarely use it. But this doubles as an analogue input. A cable – 3.5mm stereo jack to Micro-B USB – is included. Plug it into your phone and carry on with your listening.

It seemed to me that the sound quality was materially different when the earbuds were used in this way. They were still adequate, but a bit brighter, even a bit tinnier I’d say. Which suggests to me that used normally – with a Bluetooth connection and their own amplifiers providing the power – the earphones also do a little frequency response massaging to provide for a more relaxed sound.

As for that normal sound quality, it was middle of the road as far as Bluetooth earphones go. Just slightly bright, enough to improve vocal clarity without being objectionable, and with a good ability to go loud. The bass was respectable in the middle and upper regions, although there didn’t seem to be much really deep bass.

As usual, the limiting factor for bass was getting a good seal of the tips in in the ears. The middle sized tips were already fitted, but they were a touch too small to make for a secure fit in my ears. The large size were just big enough, but they did tend to work their way out over time. I experimented with the ear hooks. They made for a very secure placement, but that placement was just shy of a tight fit. Which meant limited bass, and also allowed environmental noise to interfere with the sound. In the end, one of the sets of wings gave the best results with my ears, increasing security without pulling the tips away from my ear canals.

And all that said, how well it works is going to be entirely dependent on your own ears.

The connection reliability was good, without being standout. Putting the iPod Nano or the Android phone in a front pocket had it working well. In the back left pocket, not so well. There was very little range when the source device was behind me – just a couple of metres before things started dropping out – and even directly facing the source there were dropouts well before a range of ten metres. Moral of that story: put the source device in a pocket that works and leave it there.

I like the power arrangements of the Braven Flye Sport Reflect earphones, and the ability to be able to listen without any power at all truly makes these earphones unique. Fortunately they sound good as well. Do check them out and see if they fit your ears.