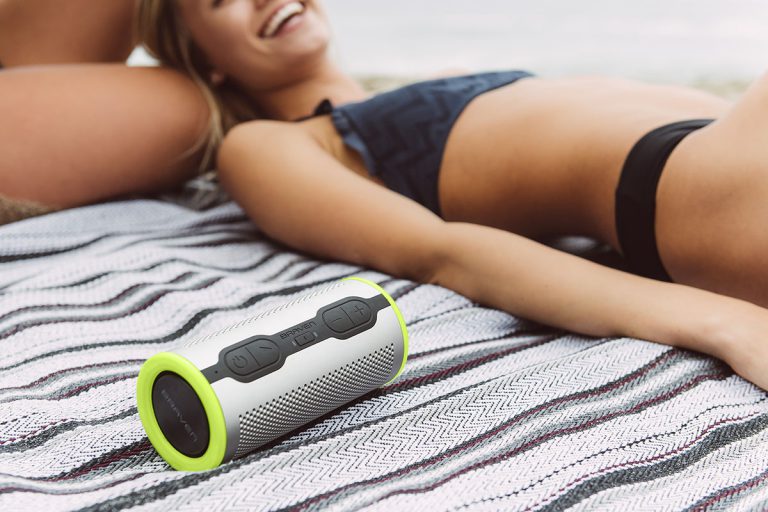 The Stryde 360 is a Bluetooth speaker from Braven’s “active” range, the same range as the Braven 405 we looked at a couple of weeks ago.

The Braven Stryde 360 is a little more expensive than the Braven 405, thanks to it being bigger I guess. It’s a cylinder, 75mm in diameter and 165mm long. The body is light or dark grey, with lime green or deep red rings around the ends.

Recessed slightly into each end is a 54mm wide passive radiator. That’s a sprung, weighted diaphragm which is tuned to speaker drivers and enclosure to help extend and strengthen the bass. It sounds like magic, but it’s solid acoustic design.

The 360 of the product name is to suggest that it can deliver 360 degree sound. Which it kind of can, but then so can any speaker. As we’ll see, there are two powered speaker drivers inside which fire in opposite directions, so it’s a bit more omnidirectional than most.

The construction is solid and well sealed. Braven says it has an IP67 rating, which means completely dust proof and able to survive immersion for up to half an hour in up to a metre of water. That does mean making sure that the rubber cover over the ports – which are between the feet on the edge on the cylinder that serves as its base – is properly in place.

There are three ports: a Micro-B USB socket for charging the Stryde 360, a 3.5mm analogue audio input so you can use a non-Bluetooth music player, and a standard USB Type-A socket. This last is so that the unit’s internal 2500mAh battery can double as a power bank for your portable device. Nice. Braven says that the speaker has a play time of up to twelve hours.

On the other side are power, play/pause and volume up and down keys, along with a couple of indicator lights.

With many modern devices, the learning isn’t in the reading, but in the doing. The quick start guide is a slip of paper, but adequate for working out what to do in general, and there are more details if you go to the Braven site and download the manual from the product page. For example, you need the manual (or to have read this review) to know that the battery level is indicated by the colour of a LED.

Braven doesn’t say much about the speakers or amplifier. But using some test tracks I would work out a couple of things. First, there are two speakers inside the unit, one for each stereo channel. The one on the “back” of the unit – with it down flat and the writing the right way around – is the left channel. The one on the front is the right channel. Both are up near the volume control end of the cylinder.

I guess that means if you want a “proper” stereo performance, you should put the speaker so that one end faces you, or stand it on its end (but that’ll inhibit the performance of one of the passive radiators).

Also, the volume “+” and “-“ keys double as track skip keys. Just hold either one down for a second to go in the desired direction.

The sound was reasonably well balanced, especially across the midrange and treble. The bass went surprisingly deep, but was a little lower in level than full balance. My measurements suggested that the bass output started to diminish below 150 hertz, and was down by six decibels at 100 hertz. But it still kept on producing below that until 70 hertz, below which the bass rapidly disappeared.

Anyway, listening to tracks like Blood, Sweat and Tear’s “I Love You More Than You’ll Ever Know”, the bass line was sketched well enough to follow effectively. Indeed, it was tight and rather well delivered. The horn blasts that punctuate that track were delivered to full effect.

I used the speaker for a while delivering podcast sound as I was painting a hallway, and the reach of its sound was excellent, thanks to the clean high levels available. But equally, sitting on my desk in front of me, as it is right now, and turned down to a much lower level, it is musical and reasonably detailed.

And when I put it on its end, with the internal speakers up as high as possible, there’s even a credible stereo image.

The unit also worked okay for hands free use with a phone. The middle button on the top answers and hangs up. With a double tap it also invokes Siri or Google Assistant. I used it with the latter, and the experience was reasonably smooth, although it was weird hearing that voice with a bit of body, rather being delivered through the tiny phone speaker.

I got pretty much a dozen hours of use out of a charge. The speaker also switches itself off after 33 minutes of no signal.

The Braven Stryde 360 is a useful, well designed and convenient portable Bluetooth speaker. You should grab a listen yourself.