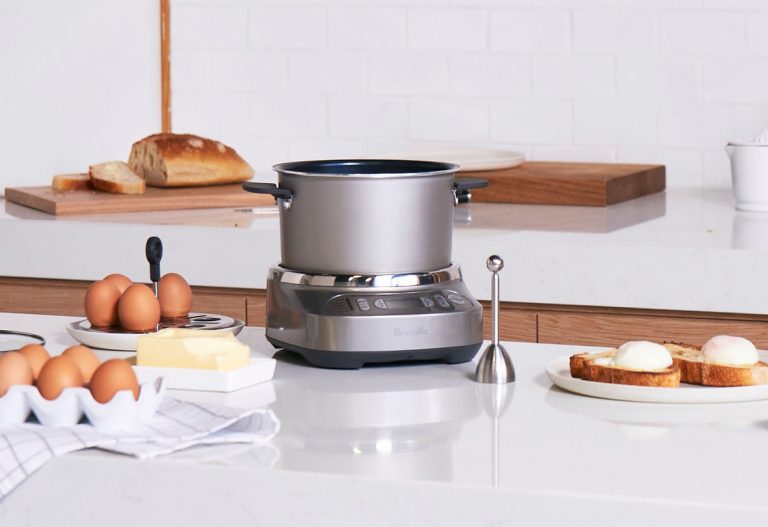 What is the Breville One° Precision Poacher? According the press release, it’s “a new way to cook everything”. The device’s carton is a little more modest. It’s a device primarily for poaching food, but it also can be used to prepare eggs in a number of different ways.

At its core, the Breville One° Precision Poacher is a temperature and time controlled cooker. The main body features a backlit display, controls and the heating element. At its back there’s a slot to hold the temperature probe. A two and a half litre pot with a glass lid sits on top. The lid which has two holes: they can act as vents or you can slip the probe into one so that the device knows the temperature of the water within. The pot is coated on the inside with non-stick material. There’s also a kind of tray on a pedestal with a handle which reaches above the water. This has six holes in which eggs can be rested. You insert it into the hot water for some functions.

The display shows you the device’s status, the time you’ve set, the current and set warming and cooking temperatures. You can display temperature in degrees Fahrenheit or Celsius.

There are also keys to select the method and “Texture”, temperature, time and “Delay”. With that last you can pop your eggs into the device and set it to have them ready for you in the morning. The “Delay” timer works on when things will be ready, not when they’ll start cooking.

The “Method” key selects between Steam, Poach or Boil, Scramble, Eggspert or Sous Vide. Steaming is a faster way of achieving a “boiled” egg. Eggspert is for a soft boiled “creamy textured” result. Scramble just means that you’re using the device as a normal pot: you add your preferred butter or oil and the whisked egg and milk mixture, and then keep it turning over while the Poacher cooks it through.

Hey, maybe it is a new way to cook everything after all!

The lid and the egg tray are dishwasher safe, says the instruction manual, but apparently not the pot itself. “Hot soapy water” only for that item.

I scrambled, poached and boiled. Rather, I did these in cooperation with the Breville One° Precision Poacher. There’s no significant difference in using this unit to scramble eggs, compared to just doing it in a saucepan or small fry pan (my preferred way) on the stove. The temperature control and smarts aren’t really useful for that.

But for poaching and boiling, it was a very good way of ensuring precision. Getting the hardness just right. Nearly every time.

Actually, every time when I got the hang of it. First time poaching I plopped the eggs into the hot water a bit too hard, causing them to spread, with some of the white hitting the bottom where it remained. Then I misread the instructions and ended up kind of hard-poaching them.

Take 2 was much better. By my third go I had it mastered. Boiling eggs was spot on from first go. Just dial in the desired hardness, and sit back and wait.

With the unit and its manual – which included instructions for the basic functions and egg cooking – were seven recipe cards covering things for which the items cooked by the Breville cooker were just one component part. Eggs Benedict, for example, Butter Poached Prawns with Tarrogon & Garlic, Vietnamese Chicken Salad (you poach the chicken breast). Lots of yummy stuff there.

If you like poaching, and you have established, comfortable ways of doing it, then this probably isn’t the device for you. But if poaching, or even boiling, an egg is a task that worries you, check out the Breville One° Precision Poacher.