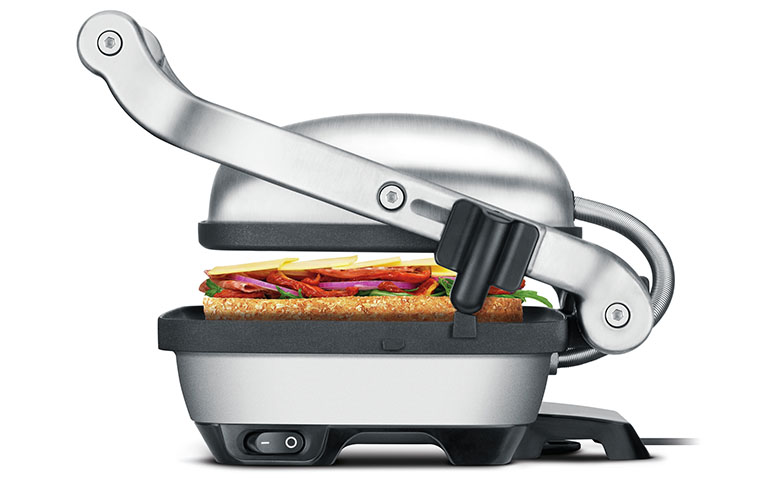 A few days ago I mentioned Breville’s new The Perfect Press sandwich maker which, says Breville “revolutionises” the making of toasted sandwiches. Time, now, to apply margarine to bread, fillings to the interior, and put it to the test. The model number is BSG600BSS.

To repeat, this is a two-sandwich flat press, not the traditional type of sandwich toaster which seals the edges of the sandwiches and cuts them across the middle. Breville’s claim is that by reducing the applied force via its “crush control” hinge mechanism – reducing the applied force from as much as two kilograms down to 425 grams – your sandwich contents won’t be squeezed out the sandwich’s sides, nor the whole thing flattened. Instead it says that your sandwich will remain “light and fluffy on the inside”.

It also offers an “open melt” position which holds the top plate above the sandwich, cooking the top by radiant heat rather than contact (the bottom still by contact).

The whole thing is sturdily built, and finished in a nice brushed stainless steel look, with black for the handle, underside and the few plastic components. The U-shaped bar to which the handle is affixed looks to be diecast.

The mechanism for setting the press position is about as simple as you can get. On the right hand arm of the press is a sliding block made of a dense plastic. In the rear position it rests on a small protrusion from the base, holding up the press lid for open sandwich melt operation. Moved to the most forward position it will, if the press is closed, slide under another protrusion to lock the top and bottom sections together so that the whole unit can be conveniently stowed in an upright position.

It’s in the middle position that the “crush control” stuff comes into operation. In that position the block engages with nothing so the top element can rest on the sandwich. I’d somehow gathered the impression from the press release that the “crush control” force on the sandwich is adjustable. But it never said that. In fact this force is fixed, and it acts to offset some proportion of the weight of the upper section, reducing it to Breville’s claimed 425 grams.

I didn’t check the force but it seemed about right, and certainly seemed considerably less than what the top plate must have weighed. The unit’s box mentioned the use of a counterweight to offset the force, but it’s hard to see how that could be done mechanically. I’m inclined to think the hinge incorporates some kind of spring mechanism. However it does it, the job is done without excess bulk, just copper-look bushes at the hinges to suggest something different is happening there.

It suffers the same weakness that just about all of these kinds of presses seem to share: plate alignment. Because there’s a single hinge, the higher the top plate is above the bottom, the further it is towards the rear. Put in a very tall sandwich and you might be lucky to get the plate to cover both front and back at the top. Addressing this, though, would require considerably more complicated hinge designs.

The bottom plate has a lip to contain things if there should be a spill of melted cheese or whatnot.

Operation couldn’t be simpler. Plug it in, switch on the power (the unit has its own power switch) and wait until the green light comes on, indicating that cooking temperature has been achieved.

I loaded up the unit over several days with sandwiches with a variety of fillings, generally using the thicker Helga’s bread that can be problematic in a regular sandwich toaster. Despite lashings of cheese, there was never a single overflow.

Not that there would have been much of a problem had there been. When I missed when piling on some grated cheese, I just let it be and later, after the unit had cooled, wiped it cleanly off the no stick surface with one stroke of the sponge.

In addition to not squeezing out the contents, the sandwiches remained thick enough to be recognisable as sandwiches, not flattened into a thick leather.

The unit was excellent when it came to not burning stuff. I put some fairly thick raw stuff into one sandwich, meaning it needed to stay in the press for well over ten minutes. I checked it after seven or so and the bread was browned quite deeply, and if I weren’t aware of the need for more cooking I would have removed it. But I let it be and by the end, while it had darkened only a little more and there wasn’t the slightest hint of burning, either visually or in the taste.

The “hot melt” position worked just as it ought to, and enough heat was generated by the top plate to melt cheese within a couple of minutes. I should note that there are not four fixed height settings for this as indicated in the press release. Just one.

Breville only markets this has a sandwich toaster. Regardless, I used it to cook a little chicken breast quite effectively. I would not recommend, though, that you do so. Not because it wouldn’t work – it most certainly did – but because I’m guessing Breville has optimised it for bread. The non-stick might not last quite so well with other materials being cooked.

I liked it. The Breville Perfect Press was easy to use, effective, delivered good results and was easy to clean, and the price is reasonable given the solid construction.