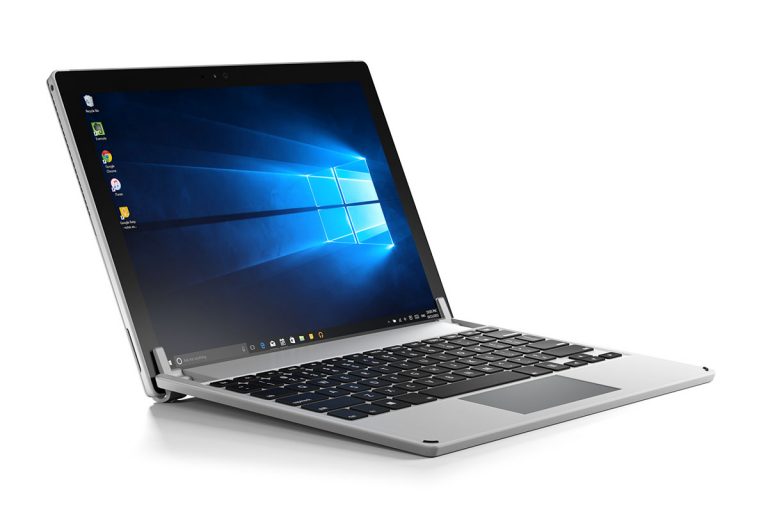 For all its many virtues, there is one practical problem with the Microsoft Surface Pro: it’s pretty useless as a “laptop”. It’s great as a portable computer. With the optional Type Cover it’s okay to type on. It has a great screen. It has plenty of performance for my purposes, and for your purposes too since you can choose a model with a power enough processor to meet your needs.

But it’s not much of a “laptop” because it won’t fit on my lap. Or barely, if I sit just so and am very careful. So when I read about the Brydge 12.3 Bluetooth keyboard, and how it attaches to a Microsoft Surface Pro, I had to give it a go.

So why won’t my Surface Pro 4 fit on my lap? Well, when you have the Surface Pro Type Cover attached, it has a kind of soft hinge designed only to hold the cover in place. Unlike the hinge between a notebook computer and its screen, it applies no friction. What stops the screen of the Surface Pro – its whole body – from falling over is the built in kick stand. This is a flap of metal on the back, hinged at its top which is half way up the back of the device. You swing out the base, and it holds up the screen as the stand on a photo holder keeps the picture frame upright.

A basketball player wouldn’t have this problem, but the thighs of my stumpy legs are too short for the kick stand to reach back, securely holding up the screen, while the regular type cover is attached. If it won’t sit on your lap, it’s ineffective as a laptop.

Occasionally duty requires me to sit on my couch, Surface Pro open in word processing program, while I type in my impressions of a musical system that is playing. For a while I tried using a wooden board I made up, placed on my lap and on which I’d place the Surface Pro. That worked, but was another damn thing to keep around. The better solution I settled upon was to put the Surface Pro 4 on my coffee table and plug a Logitech keyboard dongle into its USB socket, then use a Logitech K830 Illuminated Living-Room keyboard to type. Good enough, I suppose.

But the Brydge 12.3 turned out to be a far better solution.

Most devices don’t attract support for model-specific peripheral devices. The main exception is anything made by Apple. The limited number of models and the huge numbers of owners make the building of peripheral devices physically tailored for such things as the iPad a viable business. Microsoft’s Surface Pro seems to be one of the rare non-Apple computing device attracting similar support.

In fact, Brydge produces keyboards for iPads too – the Mini, the 9.7 inch models and the 12.9 inch iPad Pro (I imagine it’s working on one for the new 10.5 inch iPad Pro as well) . The keyboard for the Surface Pro 4 also works with the Surface Pro 3, and the forthcoming unnumbered Surface Pro, thanks to their physical similarities.

In essence, it’s a slab of metal the same size and shape as the Surface Pro with two hinges on one edge and a keyboard and touchpad on one of its faces. The hinges are metal and split, with the split section lined with a plastic or nylon bush. You seat the edge of the Surface Pro within that, pushing it firmly to the bottom. Placed properly, the Surface Pro is held solidly, yet without any of its display obscured.

The keyboard communicates with the Surface Pro via Bluetooth, not through the keyboard connector on its edge. So it draws no power from the Surface Pro. Instead it has its own built in battery which is specified to be good for three months and is charged by means of a Micro-B USB socket.

The whole thing is finished in what looks and feels like identical metal to that used for the body of the Surface Pro, so visually it’s a perfect match. In fact, any regular person would almost certainly not realise that the two units together are anything other than a regular notebook computer.

The key spacing is standard. The function keys also operate as notebook control keys: screen brightness, play pause and so on. There’s a small touchpad – 80mm by 45mm – as well.

There’s a version that has a 128GB solid state drive built in, allowing it to act as a memory expansion $399). But it  has to be plugged into the USB port, so it doesn’t possess quite the same design elegance. I’d rather just use the microSD card slot on the Surface Pro 4 for extra memory.

Lately I’ve been reviewing a few rather light weight Windows notebooks, and the combination of Surface Pro 4 and Brydge 12.3 has felt a little weighty by comparison. Especially when closed, it felt like quite the solid brick of metal and glass and plastic. But the total weight turned out to be a reasonable 1.55 kilograms, less than it felt like. Of course weight can’t be optimised the same way it would be with an entirely designed-together system. In fact, I’d guess that Brydge has intentionally designed this keyboard for its weight. If it were much lighter, then it would be too light to hold the Surface Pro 4 at all angles. A regular computer has all the heavy computery bits in the bottom, including its battery. This arrangement has all that stuff in the “screen”.

But it does hold it at all angles. At this moment I’m typing these words into Word on my Surface Pro 4 which is being held by the Brydge 12.3. I’m on my couch. The keyboard/tablet combo is on my lap. My knees and lower thighs are bare, and as a result the edge of the Surface Pro 4 is digging a little uncomfortably in, so from time to time I reposition it slightly. A normal notebook would have a flat bottom, rather than resting on the edge of a slightly protruding screen.

But a normal notebook might also be getting warm on my thighs, seeing as how the processor is underneath the keyboard. On that front, this system is cool and comfortable. If I were wearing jeans, I doubt that I’d notice.

The keyboard is a delight to type on. It is absolutely sold. More solid than most desktop keyboards. The key travel is perhaps a touch deeper than a typical notebook. The island (or “chiclet”) keys are the right spacing and feel as nicely solid and secure as any keyboard I’ve ever used, even though I’m typing these few words with as much finger force as I can muster.

The key arrangement is different to that on the type cover, but not too weird, except, perhaps, making PrtSc (Print Screen) the default function of what would normally be the F2 key. The function keys are restored to their normal roles by holding down the Fn key while hitting the relevant key. Home, End, Page Up and Page Down are Fn shifted arrow keys. I got used to that fairly quickly.

I also needed to change my mindset a little. I am thoroughly acclimated to the process of closing a laptop and having it detect that, and put itself to sleep. But with this keyboard, that only works to put the keyboard to sleep, not the Surface Pro 4. Indeed, somehow closing the Surface Pro, keyboard combo up actually woke up the Surface Pro. Once I’d realised that, it was easily fixed. Close, then press the standby button on the Pro. Easy. Done!

There were only two minor operational irritations. First, there are these slim rubber stops at the corners of the keyboard which, of course, protect the surface of the Surface Pro. The heels of my hands tended to catch on them just a little. But they seemed to survive the encounters.

The other is the touchpad. Let me be clear, given its size it is extremely effective. Multiple finger swipes work on it. Including pinching to zoom in and that kind of thing. It felt good under my fingers, smooth and certain in operation. But its smallness was emphasised by it being sunk below the surface of the body by perhaps half a millimetre. Had the case been bevelled down to its surface, that depth may have escaped noted. But the cutout for the touchpad is done as a clean right angle and that somehow emphasises the relatively small size of the touchpad.

That said, I was forced to remind myself occasionally: um, Surface Pro, remember? Touch sensitive screen? If what you’re trying to do on the touchpad is too hard, do it on the surface of the Surface Pro. Of course!

Latency is usually associated with Bluetooth connections. That’s the delay between in interaction with the controller and a response on the screen. The keys themselves may have had something of a gap in their operation, but if so it was too small for me to perceive. The touchpad had a slightly more perceptible delay. But, again, touch sensitive screen.

Over time I became accustomed to simply ignoring the touchpad, and doing my touching interactions with the system directly through the Surface Pro 4’s screen.

The Brydge 12.3 is an elegant and effective way of adding a very high quality keyboard to the Microsoft Surface Pro 4, the Surface Pro 3, and to the new Surface Pro.