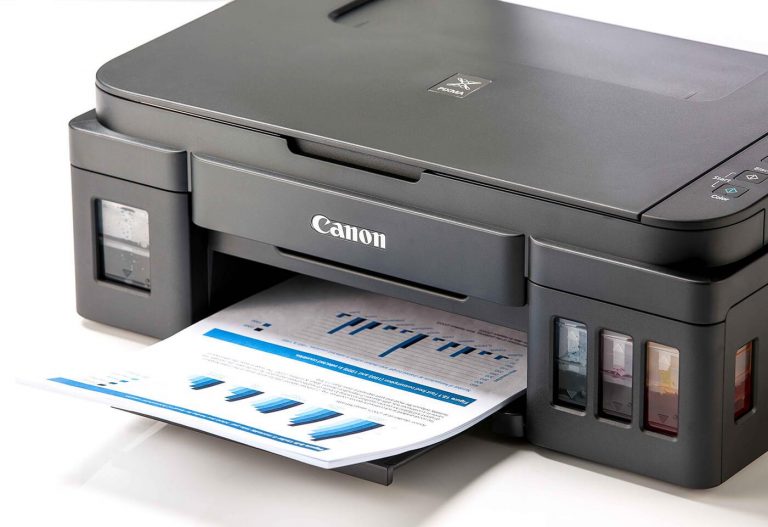 For the last few months my computer has been popping up a warning from my colour laser printer. “Help”, it says (if I may paraphrase), “I’m running out of toner!” But I’ve been reluctant to heed the warning because to replace the toner cartridges (and all four need replacing) will cost $576. That’s for colour cartridges rated at 2200 pages, and black rated at 2500 pages.

Meanwhile, the Canon Pixma G3600 inkjet multifunction (scan, print, copy) device is rated at 7000 pages of colour and 6000 pages black, out of the box, for a total cost of $499. And that includes the device itself.

I shall return to the pricing and economics of using this printer shortly, but first let’s look quickly at its features.

Although I shall mostly call it a printer, the Canon Pixma G3600 is also a scanner and a copier. The print paper path is from a vertical paper stack at the rear, through the printer, popping out onto another tray at the front. The scanner has its long dimension from left to right. The print path is rated to support papers up to 275gsm glossy photo paper. The paper tray can accommodate up to 100 sheets of regular print paper.

Down the right hand side at the top are the controls and indicator lamps They’re pretty straightforward. There is no display on the printer. If a warning lamp goes on, the printer driver control panel on your computer will tell you what the problem is.

The print resolution is 4800 dpi horizontally and 1200 dpi vertically. The optical resolution of the scanner is 600 by 1200 dpi.

The print speed is specified at “8.8 ipm” for black and “5.0pm” for colour. I confess I really don’t know what that means. For what it’s worth, I printed ten pages of a black and white document with fairly full coverage of text on each page using Word. It took one minute and 37 seconds from the time I pressed the “Print” button until the last page dropped into the output tray, so that includes processing time within the computer and network connection time.

There’s only one physical connection: USB. However Canon expects the printer to be connected to the network via the built in WiFi. That works in the 2.4GHz band and supports up to 802.11n connections.

The reason I bought a laser printer in the first place was because it was much cheaper to run on a per page basis, even though it costs a fortune to replace the cartridges. But that was then. This is now. Last year one of the big printer companies introduced models which refill from bottles, and this year another biggie, Canon, has likewise come into the game with this, the Canon Pixma G3600 printer. At 135ml capacity, the black bottle is larger than the others (they contain 70ml each).

Now let’s do a quick comparison for just black printing and assume that the brands use similar means for calculating the number of pages which can be produced. The black cartridge for my laser costs $123 for 2500 pages, which works out at 4.92 cents per page. A new black ink bottle for the Canon Pixma G3600 is rated at 6000 pages and costs $29.99. That works out at 0.500 cents per page, or very nearly an order of magnitude lower in cost.

Um. Wow? It’s hard to think of a sufficiently strong exclamation in the face of such a fact.

Yes, you’re paying a lot more up front for the hardware. Most consumer inkjet printers (and lasers, it seems) discount heavily on the hardware and make it up with the consumables. With this printer you’re paying a truer price for both hardware and consumables. And remember, again, that the up front purchase price includes a page yield of two or three times that of an equivalently priced laser, and goodness knows how many multiples for an inkjet using regular ink cartridges.

Setting up the printer is just as much a pain as setting up any printer. In this case, it involves removing various pieces of tape and one plastic bracket which hold everything secure during transportation, installing the two print heads (these clip easily into place) and pouring the contents of the four ink bottles into their respective tanks. Not so much pouring as squeezing. You only need moderately steady hands for this task.

Be careful with the ink. After emptying the cyan bottle, I knocked it over and three tiny droplets fell onto my bench, while one splashed onto a white cable. I gave them a wipe and managed to just smear the ink over a larger surface, plus onto my finger. But a bit of Ajax Spray and Wipe and a paper towel cleaned everything up nicely, including my finger. I’d be less confident of such results if it went onto cloth or carpet.

You can connect the printer to your network via WiFi, or to a computer via USB. I was determined to go the former route, since I wanted to share the printer across the network. So I carefully followed the instructions, installed the software from the CD and ran it. Naturally it failed to find the printer on the network. But how could it, since the printer wasn’t connected to the network?

Now, it’s possible – likely even – that the recommended setup procedure would work with a computer connected to the network via WiFi, but I used my desktop which is thoroughly wired in, and does not support WiFi. The instructions said nothing to the contrary and part of my role in doing these reviews is to act as the computer naïf and see what happens.

So I followed the process through twice with no success. Then the software gave a chance to use WPS to connect to the network, but that didn’t work either.

Fortunately, there’s a backup. You can connect the printer to your computer temporarily via USB and set up the network in the usual way (select an SSID and enter the password). Once that’s done, then you disconnect the USB cable and interact with the device over the network.

Later, after running the printer successfully for a while, I went to another computer on my network and ran the setup software on it, and of course it found the printer and set up ready to print with no difficulties since, by then, the printer was in fact connected to the network.

First, copying. Easy as. Stick the item to be copied on the glass under the top flap and press either the “Black” or “Color” button. For black, the copy was completed in around fifteen seconds, and for colour around 35 seconds.

Results were good for normal documents in both modes on standard copy paper (Reflex brand), although when I copied a six by four photo, the ink load was too much and the paper rippled from the dampness, while the colour was oversaturated. So I did another copy, this time of an UltraHD Blu-ray cover (for Suicide Squad) to see how a near full page would go, using some fifteen year old Canon inkjet high resolution print paper I’ve been hording. The results were extremely impressive with very accurate (if not quite perfect) colour rendition, excellent detail and no head-banding at all.

The scanning quality was very good, but do note that the resolution is not quite enough for the best results with 35mm film negatives and slides. For those a specialised scanner would be preferred. For general office use, though, this one is fine.

Using it with the computer was a pain, though. I like to have a little control and I’ve been using scanners for close to a quarter century, so a good preview/scan app with readily available settings is my preference. The software suite with this unit includes that, but you’re going to have to go looking. Instead there are a bunch of presets provided with the software, accessed through the “Quick Menu” that sits on the bottom right of your screen, all the damned time. I want my printer. I want my scanner. But not all the time.

Anyway, I got rid of the quick menu stuff. I’m perfectly happy to print direct from apps. The driver is all I need for that. And to scan, all I need is the included “IJ Scan Utility”. I mention the name because for some reason it is not put with the other Canon tools under the start menu so if you don’t know about it, you may never find it. It’s as though Canon is disassociating itself from the software. But it’s the only thing available to do it the old fashioned way.

Yes, it works well, even via the network connection. The Windows 10 scan app also worked but, as with many built in Windows 10 apps, it’s seriously underpowered. Even the ancient Fax and Scan tool in Windows works.

You’ll probably want to change the settings in the Quick Start menu to set a folder in which scans are saved and to have the scan process open the folder in Explorer afterwards, rather than open the scan in one of the applications loaded during setup.

As with printing, you can use the scanner with an Android or iOS tablet or phone using a free app. The app allows you to scan into the phone/tablet and then you can save it to your camera roll.

And the app also allows you to select photos and printable (if any) documents to send to the printer via the network. All that worked just as smoothly as it should.

For regular computer printing I did the usual Microsoft Word stuff, plus printed off a few photos using Photoshop. All worked well (except, as mentioned, when overloading plain paper with ink). An iPhone 6 photo my wife took a while back, resized a little to come out at full A4 size at 600 dpi onto 275 gsm high gloss photo paper, was gorgeous, and as good as anything from the usual shops one goes to for prints of digital photos.

Back in the olden days inkjet printers were sometimes spoken of a “near letter quality” in their print. This one is easily better than letter quality, with perfectly clean edges to the letters (to the naked eye) and excellent fine detail on letters. Only by zooming right in can you see a little wicking and, perhaps, virtually insignificant variations in alignment in the horizontal sweeps.

The ink is not completely waterproof. With a wet finger you can smudge it but it takes a little effort and remains legible afterwards. Still, it’s probably not ideal for printing master versions of contracts.

There were no unusual operational difficulties. The printer switches itself after a while – some hours of non-use it seems – so remote operation may fail unexpectedly simply because it’s off. And, of course, being an inkjet printer, it would periodically jump into a whirring of gears and oscillating of print heads as it performed some maintenance, cleaning heads and whatnot. Apart from that, it operated quietly.

The bane of home printing for over twenty years has been the cost of consumables. The Canon Pixma G3600 reduces those costs by something like ninety per cent. And while doing so, produces fine printed output, excellent photos, and offers convenient scanning and copying facilities.