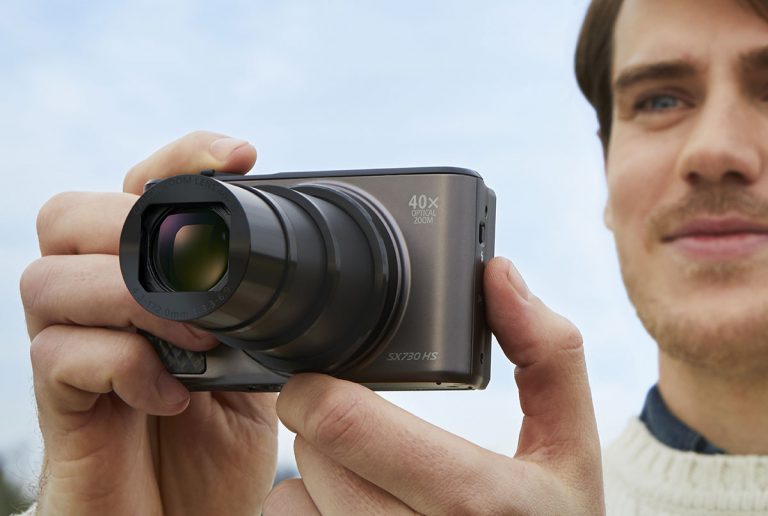 Although I had been using it for several weeks, I had no idea of the price of the Canon Powershot SX730 HS compact digital camera. That’s because Canon, in its press releases, insists on saying “prices will be set at dealer discretion”. Since value for money is an important a part of choosing most things, I find that quite the omission.

Anyway, now, finally sitting down to write up my impressions, I’ve googled around and found that Canon is selling this camera through its online store for just $549, which is rather less than I expected. Furthermore, at least one online outlet is selling the camera for just $409.

So why might I have thought this to be a more expensive camera than it evidently is? Well, Canon for one thing. This is after all a quality brand. For another … 40x zoom. Yes, that’s why I asked to review this camera. A compact camera with that kind of zoom range means you can take wide scenic shots, yet zoom right in on all manner of detail.

That 40x zoom means a focal length of from 4.3mm (not much more than a phone’s camera) through to 172mm. In 35mm equivalent terms, that means a range from a quite wide angle 24mm through to a super telephoto of 960mm.

Furthermore, the camera can focus down to as close as 1cm in macro mode.

It will also shoot video at up to full HD at sixty frames per second.

The camera is equipped with a pop-up flash. There is no optical view finder. Instead you use the 922 thousand pixel, 75mm LCD display for framing. This flips up by up to 180 degrees so you can use it for taking shots from down low, or for framing your selfies.

The battery is a light weight unit, and is rated at 250 shots (355 in Eco mode) and around fifty minutes of video shooting. Indeed, the whole camera is fairly light at spot on 300 grams with battery and microSD card installed. It measures 110mm wide, 64mm tall and 40mm deep. That makes it pocketable, although you’ll feel it flopping around in there and it does make bit of a lump.

Connectivity is via Micro-B USB, Micro HDMI (Type D), Bluetooth and WiFi. The WiFi and Bluetooth allow for remote control, and with a Bluetooth connection your photos can be geotagged. With WiFi you can also save images to a computer wirelessly, print using Web services such as Canon iMage Gateway, send photos wirelessly to compatible printers and even send them to a compatible Canon camera.

The camera is supplied with a battery and a charger, along with a light weight wrist strap.

The camera was fun to use most of the time, but sometimes bit of a beast. That last bit is entirely due to the super telephoto feature. Trying to frame a subject, handheld, with a 960mm lens is going to be hard at the best of times. Trying to do it with a light weight camera, while looking at an LCD screen is even harder. At least with a DSLR or mirrorless camera, you can typically jam the thing into your eye socket to establish three points of contact and control.

Helping a great deal is three stops of optical image stabilisation. And, as always, practice makes … less imperfect. I found the best way for hand held shooting was to frame the shot with the zoom way short of the maximum, and then zoom in on the subject. With a hand pressed against a tree (I started developing the situational awareness to know where a stabilising structure was handy) and a decent amount of light on the subject it was possible to fill a frame with a colourful bird, while remaining distant enough to not scare it away.

Again, with a mighty DSLR and an expensive lens, you’re going to resolve a lot more detail. But let’s just look at the following two shots. First, here’s the whole scene with the camera zoomed out to the widest view. If you look carefully you can just make out some kangaroos between and beyond the two trees.

And here we zoom right in from the same position.

To be fair, this was the steadiest shot I took of half a dozen, and I was braced a little by a handy tree. The camera bumped up the ISO to 800 to allow a 1/250th of a second exposure, and still it’s a little soft. But this is the whole frame, entirely filled by the creature. And it shows that the OIS is certainly doing something. The old rule of thumb for 35mm cameras was that, hand held, you should have a shutter speed of less than the reciprocal of the focal length. So for this camera, you’d want a shutter speed of at least 1/1000th of a second.

Note how much of the frame the bird occupies. This one is entirely hand held. The camera managed 1/400th of a second at ISO 640. The unimpressive framing was about the best I could manage, though, with the camera held out at arm’s length.

Finally, what about the macro setting? Well, here it is. As you can see, you can get in there quite well.

First photo from switch on took, as best as I could time it, just on two seconds. Zooming from the default wide angle to maximum telephoto took a touch under three seconds. Fairly fast, although as your subject starts to get skittish, and it can seem longer. Lucky you can shoot from so far away.

Oh, incidentally, there is a digital zoom that quadruples things. I switched it off because I figure if you want do a digital zoom, why not do it in Photoshop? Things are hard enough to handle with a maximum 40x optical zoom. Even on a tripod, a 3840mm (35mm equivalent) focal length is ridiculous. That said, by default it stops at 2x digital zoom for a maximum of 80x overall. That’s the level to zoom can go before the picture becomes “noticeable grainy”, as Canon puts it. To go further, you release and then apply again the zoom lever.

The Canon Powershot SX730 HS compact digital camera gives you reasonable quality with brilliant versatility at a relatively affordable price. This is a great camera for tourist and traveller who isn’t so enthusiastic about carrying a bag of lenses around for a DSLR.