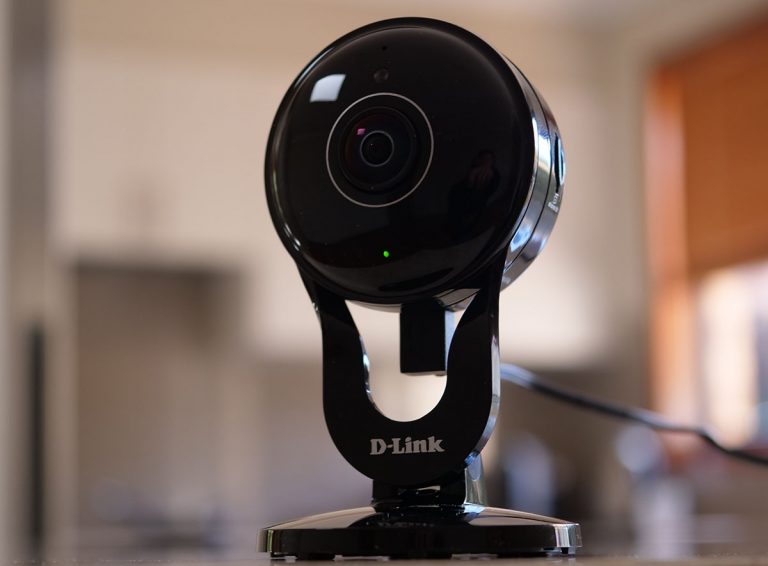 As I’ve previously asked, what about an easy to use, wireless home security camera like the D-Link Omna 180 that works for those who aren’t Apple users. Perhaps the D-Link DCS-2530L Full HD WiFi Camera will do that job.

Let’s get one thing out of the way. The DCS-2530L is nowhere near as pretty as the Omna 180. Rather than having a cylindrical metal look, it’s made of shiny black plastic, with the camera held by two arms on a pedestal. A small pedestal. It stands a hair under 110mm tall and is 66mm wide and deep. It weighs only 105 grams. It comes with a five volt, 1.2 amp power supply which connects via Micro-B USB. And there’s a slot for a microSD card of up to 128GB capacity.

It connects to your system via WiFi – 802.11b/g/n standards, 2.4GHz only, supported. Its top communications speed is 300Mbps, but that depends of course on how crowded your 2.4GHz wireless space is, distance from an access point and so on.

The camera offers up to full HD resolution, has an infrared night mode with a range of up to five metres, and a wide 180 degree angle of view. It’s clearly an indoors model, not weatherproofed at all.

Unlike the Omna 180, it’s not tied to any virtual eco-system, except for D-Link’s own, should you want to use it to full effect. It may not look as pretty as the Omna 180, but unlike that model you can use it remotely – that is, away from home via the Internet – with no additional equipment or subscriptions required. You just have to sign up for a free D-Link account and, of course, install the mydlink Lite app to an Android or iOS device.

The unit has the ability to push notifications via the app when it detects something moving – or something making noise – and automatically trigger recording. It can allow you to hear what noises are happening around the camera, although you can’t talk back through it. It’s for monitoring (and recording) only.

Incidentally, I see that there’s also a model DCS-2630L available. This seems quite similar, but for the extra hundred dollars includes an 8x digital zoom, two way audio and 802.11ac dual band WiFi. It’s also a little bigger physically. This might be the one to go for if your 2.4GHz air space is already pretty full, or you’re installing a bunch of them.

Setting up turned out to be extremely easy. The main thing is to connect the camera to your WiFi network. There are two ways. D-Link recommends using a WPS push-button connection. I’ve gone off that lately, ever since I found a device I’d connected that way tended to have trouble re-connecting after a power off. It may be a bit more tedious at the outset, but if you enter a password, things should remain stable.

So I chose the “harder” way. You install the mydlink Lite app (I used the Android version, but iOS is also available) to your phone. You start it up, hit the button for starting a new account, then the app will open up your camera. You bring the little QR code that’s on a card in the box in front of your phone’s camera, and the app takes over your phone’s WiFi and looks for the D-Link camera. When it finds it, it asks you to select a WiFi access point and enter the relevant password. Ten or fifteen seconds later your phone’s connected back to your WiFi network, and so is the camera.

Then you go through a free account registration process – takes a minute or so – hit the link in the confirmatory email and you’re done.

The mydlink Lite app also was easy to use, and quite intuitive. As I said, I used the Android version, but later also gave the iOS version a whirl on an iPad Mini 4. The layout was a bit better on the latter, thanks to the larger screen allowing a greater area to be visible, although it insisted on using landscape mode.

Two big choices are available: local or remote connection. Local only works when you’re on the same WiFi network as the camera. Remote works from anywhere via the Internet and D-Link’s servers. Both give you some control over the camera, including triggering snap shots and video, and also allow you to see a live feed of what the camera is seeing.

You can choose between three resolutions – the setting applies to photos, video and the live feed. The defaults are 640 by 360 pixels (labelled, for some reason, 480p), 720p and 1080p. The frame rate depends on resolution. At full HD a maximum of 15fps is permitted, while for lower resolutions 25fps is the maximum. In the deeper settings, which we’ll get to, you can also set the video bitrate, up to 8Mbps for full HD, although the default for that is 2Mbps. As low as 128kbps can be selected, although the quality is going to be pretty low. The format is H264 which gives pretty good quality for fairly low bitrates. (Still snap shots are JPEG of course.)

You can also set the light mode from the screen – IR for night and regular for day, or just leave it on auto.

All of this worked precisely as it should. The picture quality was fine. There’s the usual slightly weird distortion of squeezing a 180 degree horizontal field of view into a neat rectangle, but the clarity was fine. We’re using this to keep an eye on things, not make nature documentaries.

The lag between something happening before the camera and appearing on screen in the app was typically between one and three seconds, even at full HD, whether using a local connection (through WiFi) or a “remote” connection (I switched off WiFi to make sure everything had to go through the Internet.) Even in complete darkness the camera took respectable monochrome images, illuminating things using two infrared LEDs.

There were two things that didn’t work quite as I expected, though.

First, whenever I manually took a photo or started the video recording, they did not record to the SD card but to the device from which I did the triggering. I guess that makes sense. You probably want to make sure you have your security footage and photos in case the crook knocks off the camera. According to the manual there’s provision in the deeper settings to set the recording folder, which is where I imagined you could change things. But the icon for that was missing. I queried D-Link about this to make sure I wasn’t doing something wrong. But D-Link tells me that the device will not save manual recordings to the SD card.

What does get recorded to the SD card are “event” recordings and scheduled recordings. One option for scheduling recordings is to have it always on.

The motion detection just didn’t seem to work initially. I switched it on in the app, and I could prance around in front of the camera, but it didn’t trigger a recording and it wouldn’t send me a notification. The notification system definitely did work. Whenever I unplugged the camera so I could move it somewhere else it sent me a notification. Just not when I was trying to emulate a burglar.

It just turned out that the default sensitivity was set very low – just 30 on a scale of 100. I turned it up to 100 and instantly I was getting plenty of notifications … and recordings to the SD card. A bit of fiddling found a reasonable setting. You can also set the area to be monitored for motion.

The motion triggered recordings are each seven seconds in length and are accompanied by a still shot as well.

There’s also an option for sound detection. Again, you can set the sensitivity of that.

The deeper settings I keep mentioning are accessible through an extensive set of web pages presented by the camera if you key in its IP address into a browser on a device on the same local network. Which raises the question: how do you find out its IP address? I couldn’t find it in the app. Fortunately I know how to inspect my router’s settings to find out such things, but I’m not sure everyone does.

Anyway, if you can find out its IP address, then you can view video from there, download the recordings and photos on the microSD card, if any, to your computer or device, and make all kinds of changes, including configuring the three video formats from which you can choose. Plus set up continuous or scheduled recordings.

Easy to use? Certainly setup was super simple and reliable. Some clarity in the documentation on the issue of recording to SD card would have saved me wasting time trying to work out what was going on. I’d strongly recommend purchasers download the full 74 page PDF manual from the D-Link website, because it’ll help with the web interface.

But in practice, after a bit of fiddling with the motion detection sensitivity, the camera proved reliable and easy to use. And it was nice to be able to see what was going on from, basically, anywhere in the world.