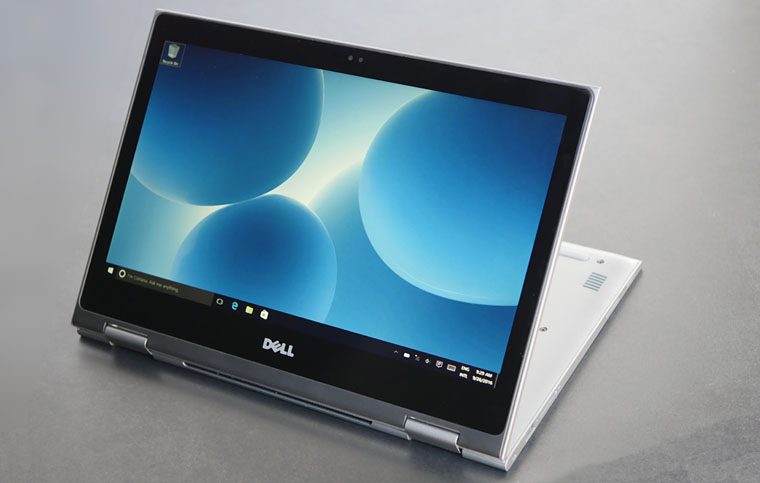 Makers of Windows-based portable computers have been quite inventive in recent years, thanks in part to the excellent support for touch screens incorporated in Windows since version 8. US-based Dell Inc., a company that was formed with the personal computer, has several portable ranges. Here I look at a model from its Inspiron series, the Dell Inspiron 13 5000 2-in-1. Do note that many models in the Inspiron range are not 2-in-1 models, nor indeed, even notebooks, so this review shouldn’t be taken to apply to any of the others.

So, 2-in-1 eh? What does that mean? In essence, it is a standard notebook computer, but with the additional functionality of a touch screen, and the ability to fold the screen all the way around to turn it into a tablet, albeit a rather thick one with the back covered in keys. You can also use the main body as a kind of kickstand, having the whole thing in a tent formation. Obviously the keyboard switches off in certain orientations – basically, the unit switches to tablet mode once the screen has been folded back to a smidgeon over 180 degrees. Even if you’re holding the computer upside down, the displayed content will flick over to standard notebook style orientation once the angle between screen and keyboard is less than 180 degrees.

As I write, you can get a version of the Dell Inspiron 13 5000 for as low as $849 delivered when purchased direct from Dell (normal price $999). This is for an i3, 4GB, 1TB hard drive version. Moving to the i5 with 8GB and 256GB SSD – the review unit – obviously costs quite a bit. The price I’ve noted in the box — $1299 – is the current special deal price. Normal price is $1499. There are various options you can add at time of purchase. Mostly these are software additions, but you can specify the backlit keyboard option for an additional $23.10.

The particular Core i5 processor is the i5-6200U from the Intel Skylake range, running at 2.3GHz. That’s plenty for everyday use including browsing, playing back media, running office apps and so on, especially with the 8GB of RAM. For people who are patient, you could probably do some video editing and rendering, but if that’s your bread and butter, you’d probably want to look at an Inspiron 15 7000 with an i7 processor.

The touch screen is 13.3 inches with 1920 by 1080 pixels of resolution. It is powered by the Intel HD Graphics 520 graphics processor built into the CPU. The camera includes an IR component and it supports Windows Hello (ie. Face recognition sign in.)

There are two USB 3.0 connections and one USB 2.0, plus a slot for a full size SD card. The card hangs out of the computer casing by less than a millimetre, so with moderate care you can leave a high capacity card in there all the time to increase storage capacity (if the 256GB SSD isn’t sufficiently large). There’s also a full size HDMI port.

The computer is fairly slim at 20.4mm and reasonably light at 1.62kg, although it isn’t going to break any records for either. That has the nice side effect of making it feel very solid. Nothing flexed. Nothing swung open unexpectedly. The metal case is finished in an unremarkable gun metal grey. The hinges on the screen were fairly tight, but smooth in operation. Opening the lid is a two hand job.

The computer comes laden with the usual collection of junk that PC makers feel impelled to load onto their machines. The review unit had been around the traps, so it was even a bit worse than usual because McAfee LiveSafe security software would issue a plaintive plea from time to time, alleging its trial period had expired. In the end I uninstalled it (sorry Dell). You have four security software options when ordering this computer on line: you can get the free thirty day trial, or a 12, 24 or 36 month subscription (cost $75.90 for that last one). There’s no option for nothing which is what I’d prefer (Windows Defender and sensible personal practices is sufficient for computer security). For what it’s worth, McAfee LiveSafe includes a password manager, secure cloud storage and can be installed on a “reasonable” number of devices, not only Windows ones.

According to the Windows Uninstall facility there were also eight Dell-branded bits of software, mostly providing user support functions.

I’m going to assume that because the particular review computer had indeed been around, when delivered new users wouldn’t be confronted with a computer claiming to have no networking hardware installed. Digging into the networking centre revealed that it had simply been switched off for some reason. A flick of a virtual switch, and it was right to connect to my WiFi network. And connect it did, without the slightest delay.

The network connectivity was solid on my middling-performance AC WiFi router. I installed my usual software suite, including Office 365, and that went very smoothly and as fast as could reasonably be expected. When I logged onto Dropbox, I discovered that a year’s free 20GB was added to my available storage courtesy of Dell. Thanks! I couldn’t find anything in the product description to say that this is a usual feature, but I’d guess it is. There was nothing else on the review computer to suggest any special additions.

The screen proved nicely bright so long as I didn’t mind chewing through the battery pretty quickly. By default it runs at 40% brightness when running on battery. On a sunny day, but in a shaded position, that made reading a text document (black on white background) barely possible. But clicking it up to 100% fixed that. Even though the screen has a shiny finish, reflections were sufficiently over powered by the screen to avoid viewing difficulties. However, after plugging away for twenty minutes like this, the battery icon advised me that I had 79%, or two hours and 25 minutes remaining (to be fair, this was while streaming full resolution music from the network and onforwarding to Bluetooth earphones.

The combination of full HD resolution and a smallish 13.3 inch screen size made for well formed characters with sharply defined edges. Photos and video looked first class as well. Streaming video ran smoothly at full HD in full screen mode with great sharpness and detail, and a respectable contrast ratio.

Cortana worked, even for speaking to, but I had to go through the rigmarole of first installing the Australian English language pack and setting it as the default language and rebooting. When setting it up Cortana complained about the computer’s microphone, saying it was not designed for Cortana, so it might not hear me. But it seemed to work well enough anyway.

The speakers were decent enough for a notebook computer. I used a Bluetooth connected speaker instead for the most part, and this worked reliably and sounded very good.

The trackpad has a slightly textured surface. I prefer a glassy finish but it made little practical difference. It supports multitouch and you can use the Windows settings to have three and four fingers taps to open the action centre, switch apps or do nothing at all.

Obviously using the touch screen is often the more effective way of doing many things, while the touch pad is way more efficient in lots of other things. It’s always nice to have the option.

The keyboard was nice to type on (subject only to the usual notebook limitation: the lack of a decent tilt). It was well built and at those moments when I became especially passionate in my typing, the keystrokes were registered without the slightest detectable amount of flexing in the body of the computer.

I couldn’t find any claims for battery life on the Dell website. For what it’s worth, pushing it hard (4K video on a continuous loop played by VLC, screen at the battery default of 40%), it lasted for two hours and 17 minutes. Not pushing it at all (just showing the desktop, again at the 40% default), the computer switched itself off after ten hours and 19 minutes. You should expect something between those two extremes in normal use.

The Dell Inspiron 13 5000 is a fine portable computer with good performance and a very good screen. It’s light enough not to be burdensome when travelling and, with the ability to fold back the screen and use it in tablet mode, you might be able to get away with using it that way even during takeoff and landing.

Overall
Features
Value for money
Performance
Ease of Use
Design
Reader Rating0 Votes
Solid build, can pretend to be a tablet, fine display, good performance, good battery life
Not much, except perhaps USB Type-C would be useful
4