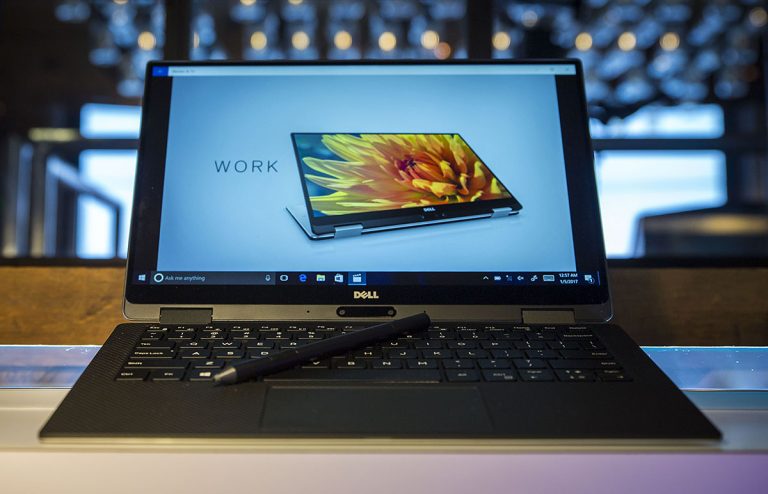 I hate cooling fans in computers. I remember the general horror that greeted the Intel 80486 – I think that was the one – because it needed to have a fan attached to the CPU. As I’ve previously noted, I purchased the entry level Microsoft Surface Pro 4 in part because it was fanless. But here comes Dell with a 2-in-1 that uses an honest to goodness Intel Core i7 processor, yet remains fanless. That’s the Dell XPS 13 2-in-1.

The review model was the “Black Edition” but it’s a fairly silvery black. It is built around a current 7th Generation Intel Core i7-7Y75 processor. According to Windows 10, this is a 1.3GHz model with a 1.6GHz turbo mode. Dell specifies it as “up to 3.6GHz”. In practice during my battery run out tests I saw it pushing into at least the high twos when running the 4K video.

It has 16GB of RAM and a 512GB PCIe solid state drive. Models with lesser processors, smaller RAM and less capacious drives are available at lower prices. Graphics are handled by Intel HD Graphics 615.

As a 2-in-1 you can use it as a regular laptop, or in tent mode with the keyboard folded back to act as a stand, or as a tablet with the keyboard folded all the way back. The outer body is built with machined aluminium and while the face surrounding the keys uses a nicely patterned carbon fibre. The hinges – which get quite the workout on computers of this kind – are steel. The display is covered with Corning Gorilla Glass.

The display is quite the thing to behold. A 13.3 inch unit, it stretches all the way to the sides and top of the panel, with only 6mm of bezel in those directions. It offers QHD+ resolution: 3200 by 1800 pixels in 16:9 aspect ratio. It is seriously impressive how it uses up the whole area. It is multi-touch sensitive in keeping with the tablet-style use the computer supports.

The 720p camera is, consequently, at the bottom of the screen. Somehow this seemed not quite right, but in fact I could find no way in which it impeded normal use. In fact, it’s better than many because it supports Windows Hello, allowing one to easily sign in using face recognition.

Or fingerprints. There’s a fingerprint scanner to the side of the touchpad. The touchpad is fairly large and has a very smooth surface. The keyboard’s chiclet (ie. island style) keys are clearly marked, the standard spacing and backlit.

The computer weighs 1.24 kilograms and feels very light, yet solid, in the hand. At its maximum it’s 13.7mm thick.

Dell included the optional ($68) “Active Pen” for me to check out. This seemed a little weird when setting up because in addition to the AAAA battery you also insert two extremely tiny button cells. It’s not at all clear why two power sources are required. But I’d shell out for it because it felt great on the screen, the computer was highly responsive to it, and it opens up the way to using handwriting recognition (once you go through the steps of installing Australian English language support through Windows setup.)

This computer was delight to use in just about every way. Especially due to it making no noise. Notebook computer fans aren’t usually loud, but they are high pitched enough to be quite irritating. Using this computer was a serene experience.

Well, there are limitations. It needs no cooling fan because this mode of i7 CPU is designed to produce relatively little heat. That means it is lower powered in terms of performance. In all my use of the computer, that only became apparent when I ran my power run-out test looping a 4K video. Otherwise, the computer was fast and responsive.

Let’s be real about this. This computer is an executive machine, not one designed for gamers or those doing massive number crunching exercises. I loved using it. But I only occasionally do CPU-heavy tasks. The key board was excellent. The touchpad verging on as good as a Mac’s. The screen was extremely clear, once I’d made a simple adjustment.

With such a high resolution display, bitmapped system fonts have to be resized to be visible. The setting was 250%, but I think that was a touch too high. Some dialogue boxes filled the screen more than was necessary, and some fonts didn’t take kindly to the two-and-a-half times resize, become a touch fuzzy. I changed it back to 200% (Settings/System/Display) and that gave a good balance between screen real-estate consumption, readable font size and clean text rendering.

Opening the lid was a two hand job, I guess because the 2-in-1 design demands the use of fairly tight hinges.

When running on battery, by default the screen brightness drops back to forty per cent. But it also throttles back the CPU usage, it seems. To test battery life under a high power consumption scenario, I set Windows so that it won’t power down or switch off the display (but I do let it have its forty per cent way with the display) and loop an UltraHD video using VLC.

And even when the battery was virtually full there was a lot of breakup of the video, along with pauses, when using this computer. In fact, even with power applied there was the occasional breakup, so I used Task Manager to have a look at CPU usage, and it was running at an average of 93%. (By way of comparison, my desktop computer, which uses a fairly hot Core i7-7700 CPU and has a respectable graphics card, requires an average of 19% of its CPU capacity to run the same clip on the same version of VLC.)

The computer worked its way down to an indicated 4% remaining before switching itself, some two hours and nine minutes after being taken off the power. I had the sense that the percentage countdown kind of accelerated towards the end.

That sense seemed to be confirmed when I ran the do-nothing power test. That is, a fresh reboot followed by brief wait to let all the startup power-consuming processes to complete, and then just let the screen display the desktop while doing nothing else (other than showing the battery indicator). The computer lasted for eight hours and eight minutes before switching off, again after showing the 4% remaining indicator for a while. The fifteen hours Dell mentions seems to me bit of a stretch, especially as that’s supposed to be while using Office products.

I’d suggest a realistic battery life would be between two and eight hours, depending on the intensity of the tasks being performed.

This time I noticed that after seven and a half hours there was still an indicated 25% battery remaining, so I figured I had a couple of hours to go before having to ready myself to click the stopwatch button. It was only by chance that I noticed after 35 minutes that it was at 4%.

There’s a lesson in that: don’t rely on the battery remaining indicator. I should note that unlike some computers, there was no estimate of remaining time remaining shown on the battery indicator. But there is one cute feature. A tiny button on the side lights up a set of four little LEDs. Up to four, that is. The number that shows indicates battery level. That means you can check charge level without having to actually start the computer.

So, if you want an attractively styled, nicely slim 2-in-1 computer with a good pen (albeit as an option) for general use, go have a close look at the Dell XPS 13 2-in-1.

Overall
Features
Value for money
Performance
Ease of Use
Design
Reader Rating0 Votes
No fan! Beautiful display, ability to use as tablet
Not best choice for heavy computations, battery a little less life than some similarly sized computers
4.2