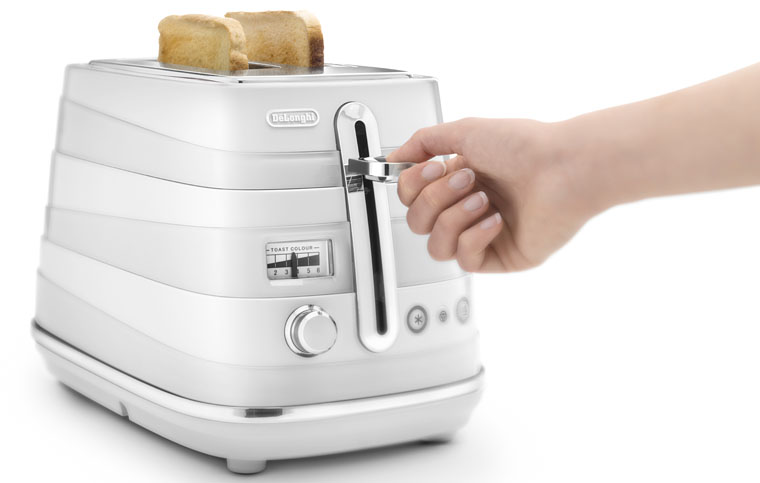 Last week we had a close look at the electric kettle from DeLonghi’s new “Avvolta” range. This week we’re diving into – perhaps “poking slices of bread into” might be a better formulation – the DeLonghi Avvolta two slice toaster.

The toaster is styled to match the kettle and as with the kettle is available in three colours: red, black and white. DeLonghi sent a white one for review. The finish looks to be a high quality and quite thick plastic finished in a very high gloss. A slightly different toned ridge decorates the surface. DeLonghi calls this a “transparent resin ring”, wrapped around the body. It certainly adds interest to the appearance. All this is enhanced by chrome-look highlights.

The DeLonghi Avvolta is rather large for a two slice toaster. It stands 208mm tall and is 319mm deep and 192mm wide. It’s pretty solid too at 1.9 kilograms. It uses 900 watts of power.

There is of course a removable crumb tray and non-slip feet. Also on the bottom is provision for wrapping excess cord to hide it away. The cord can exit either to the left or right, facilitating easy placement.

I was about to say that it is a pop-up toaster, but are there any other kinds these days outside a hotel’s breakfast room? The toaster slots are wide. The wire bread holders stand about 30mm apart when the mechanism is raised, providing for very thick bread to be toasted. As it’s lowered they are gently brought inwards to hold the toast in place.

The controls are on one end. There’s the handle for raising and lowering the toast, of course. To its left is a rotary control for level of browning. Above that is a needle and scale in a window which shows the setting, adding a slightly retro styling flourish. Three buttons to the right provide for defrosting, reheating and releasing the lifter so that it can pop up.

There’s nothing too surprising about how a toaster works, even a premium one like the DeLonghi Avvolta. You pop the toast in, set how dark you want your toast to be and push down the lever. (It won’t lock down unless the toaster is plugged in and power switched on.) After a while, the toast pops up, cooked. DeLonghi talks about the toaster being fitted with a “progressive, electronic browning control”. I had visions of electric eyes determining when it was done, but it seemed to me to be time based.

For example if you use the “Defrost” function, the toaster runs a bit longer, according to the instructions, to allow time for frozen toast to become unfrozen. Were a colour detection mechanism in place, this wouldn’t actually be unnecessary. More to the point, even though I’d turned the control to a “lighter” position than the previous bout of toasting, my frozen and then defrosted and then toasted piece of toast actually came out darker. All that’s fine, it just means a little experimentation to determine the settings for your preferences and the bread that you’re using.

The browning was very even across the toast, right up to the edges. When cooking just one slice, the inner side ended up cooking faster than the outer, as usual (since the extra heat from the empty side gets to work on it). The popping up was by means of a strong spring: not so strong as to make toast fly out, but strong enough to ensure there shouldn’t be any sticking.

The default position after the toast has cooked puts the bottom of the toast about 80mm down from the top of the toaster. There’s a little play so you can push it up a bit, bringing that down to 70mm. That’s close enough to retrieve your crumpets, if you’re careful. Don’t want burnt fingertips!

Surprisingly, a sticker on the toaster informs the purchaser that the toaster is “an attended appliance” and requests you to “not leave unattended in use”.  I dutifully stood by it as it did its stuff. I didn’t chance leaving the room. Who knows what might have happened!*

If you like all that but lament that a two slice capacity is insufficient for your needs, there’s also a four slice version for $239. There’s not much more to say other than summarise: the DeLonghi Avvola toaster produces nice toast and looks stylish while doing so.

* I’m planning on pointing out silly lawyer-imposed warnings wherever I find them.