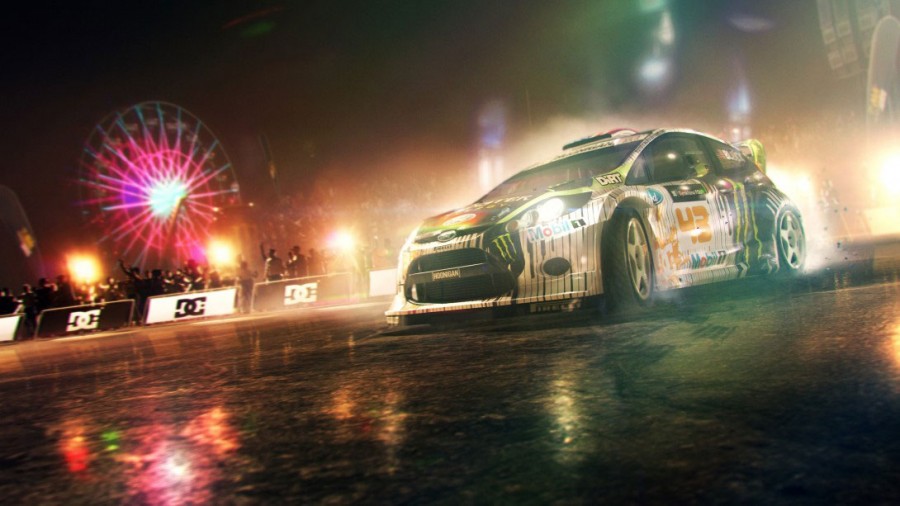 Dirt Showdown is a brand extension of the Dirt racing game series, severing contacts with the more simulation-like aspects of the main series and narrowing its focus to embrace, and expand upon, the more showy elements, as exemplified by the ‘gymkhana’ mode in Dirt 3. Despite the slimming down of the content, Dirt Showdown is selling for almost the same price of a fully-fledged game, which it simply is not.

You get a pretty clear idea what the developers were intending with this Dirt Showdown when you read any of the PR blurb thrown around in advance of its release.

Words such as ‘frenzied’, ‘electrifying’, ‘no-holds barred’, ‘high octane’ and whatever other synonyms for ‘exciting’ that publisher Codies can unearth from their PR Thesaurus. Even the release itself is termed as ‘uncaged’, as Codemasters wants us to think that you’re unleashing some astonishingly powerful and dangerous beast onto your gaming console.

Instead, true to form, Dirt Showdown is (rather irritatingly) imbued with an all-pervading party atmosphere, complete with manic announcer, fanfares, trumpeting horns and, yes, sadly, fireworks. To continue the party analogy, Dirt Showdown is the strikingly beautiful, immaculately presented fake blonde with fake boobs and loads of makeup who you think you want to get to know but, on first contact, proves herself to be a vacuous airhead. This may or may not put you off further contact – for many the superficiality is an irrelevance compared with the excitement of the overall experience and worth tolerating. To others, the lack of substance once you scratch the surface is too much to bear given the meagre rewards.

Which camp you find yourself in will determine how much enjoyment you eke out of Dirt Showdown. As with all their racing games powered by the extraordinary EGO engine, there’s no denying Codemasters’ ability to program and present a thrilling driving experience, boosted by generally gorgeous and occasionally breathtaking environments to race through and the best car modelling in the videogames business.

Codemasters is the undisputed champion of the videogame racing world, in our view, which makes the arrival of Dirt Showdown so confronting. We’re not going to take the purists’ side and argue that Dirt and Grid, Codies’ seminal off and on road racing games respectively, should be 100% authentic or, worse, ‘realistic’. They’re games, and Codemasters dev teams know better than anyone how to imbue their games with the perfect balance of authenticity versus fun, but to witness Codies making that seemingly irrevocable slide towards Americanisation with each release is galling. Just as all first person shooters seem to be increasingly aping the hyperventilating, oafish bombast of the Call of Duty series, so most racing games are veering towards crass, aggressive shooters on wheels where the racing is obfuscated with pyrotechnic excess.

With game types divided broadly between Race, Demolition Derby and ‘Hoonigan’ events, Dirt Showdown never really takes its foot off the laughing gas pedal. As a newcomer format, there’s a refreshing period of novelty while you learn the best techniques that allow you to prevail in the demolition arenas, but the ‘freestyle’ stunt parks are made less challenging thanks to a simplified handling model whereby you can pull off multiple donuts, for instance, with no hands on the controllers analogue sticks at all, just holding down the accelerator.

However, the emphasis, in all the event types, is on barely controlled motoring mayhem. Where the demolition events are free for all smash-em-ups, the races quickly demonstrate that luck is as important a deciding factor for success as skill.

Multiplayer can ease the sense of unfairness you might feel when the computer-controlled opponents miraculously catch up with you or recover from 180 spins seemingly in milliseconds, and can push you to greater heights when joyriding, but it’d be great to see the end of yet another variation of ‘capture the flag’.  In fact, multiplayer is really where all the fun is to be had in Dirt Showdown, where the uniformity of the single player mode is replaced by some quite tense and stimulating confrontations with up to eight real folk.

The vehicle handling in Dirt Showdown, while perhaps not really conveying enough distinction between types, is mostly a joy. Sudden t-bone collisions and spin-out nudges notwithstanding, you always feel delightfully and solidly in control of the vehicles.

Sadly, the events all feel vaguely similar, even before you complete the first tier of challenges, so Dirt Showdown is probably a game best played in 20-minute bursts – with friends, preferably, as even local multiplayer is offered – to avoid the monotony that sets in after a few races.

As a long-term Codies racing-game fan, it’s hard to be entirely objective about Dirt Showdown and, as a concept for a brand extension it feels quite depressing. Such palpable pandering to the US market erodes the company’s unique identity and reputation for superlative racing videogames, yet we recognise the commercial imperative for making such decisions.

But if you’re after some, (cough!) ‘no-holds barred’ arcade racing action, as with their less noisome offerings, no-one does it better than Codemasters and the genre is no better represented than with Dirt Showdown.