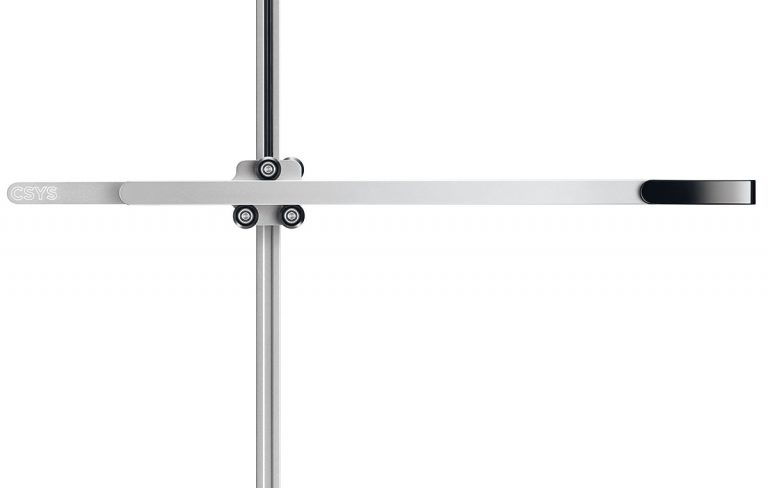 The most famous Dyson products are vacuum cleaners. Vacuum cleaners have electric motors, and are largely about air flow, so it isn’t surprising that the company branched out into other products using electric motors to direct air: fans, heaters, hair dryers, hand dryers. And here we have a … light?

Yes, this is the Dyson CSYS Task Light. It’s tied to the company’s strengths not by electric motors or air flow, but by engineering and heat flow.

I guess you could call the Dyson CSYS Task Light an LED desk lamp. But it’s one that adjusts in several ways, and one that directs light very specifically. And it is of course engineered well beyond what the attentions lavished on any regular desk lap.

It has a heavy base – surprisingly heavy – with a slim aluminium vertical riser and a slim horizontal cross arm. The lamp is at the end of the arm and consists of eight LEDs. Each LED is in a “conical reflector” to, says, Dyson, “help reduce glare”.

The review Task Light was a desk top model. There are also clamp models – they cost the same – which can attach to the edge of a desk or table, and a floorstanding model – $1200 – which goes you know where. They are available in natural aluminium with silver highlights, or black highlights, or in anodised black aluminium.

The review model’s base is round and about 175mm in diameter. As I said, it’s heavy. Indeed, the whole lamp weighs 4.45 kilograms according to my scales. It has a built in turntable arrangement. This nicely keeps the cable from the twelve volt power adaptor still, so you can rotate it freely.

Because of the weight of the base, and the lightness of the rest of the structure, even fully extended there’s not the slightest sense of the thing overbalancing.

With the swivel, the vertical adjustment and the horizontal adjustment it’s clearly very flexible. But, note, there are no angle adjustments. You can’t turn the LED head sideways, for example, to illuminate something on a wall.

One further note: how would you design a slider arrangement for one aluminium bar against another? I’d probably think about nylon bushes, I guess. But this is Dyson, and as we’ll see in the next section, the CSYS Task Light has been engineered to last for a very long time. So for both horizontal and vertical movement, Dyson has used grooves in the aluminium bars and three wheels – two on one side, one on the other – to allow each bar to move against the other without significant friction. And the wheels? They seem to have black nylon or similar (polycarbonate, perhaps?) “tyres” around them, and are mounted on hefty looking bearings. Real ones, by the look of it, with ball bearings inside.

Oh, also, there’s a counter weight for the vertical movement, allowing it to slide up and down without effort.

LED lamps are typically rated as having a lifetime of something like 20,000 to 40,000 hours. Even that first figure works out to running the light for eight hours every day for nearly seven years. The Dyson CSYS Task Light is rated at 144,000 hours. Let’s say fifty years at eight hours every day. Or sixteen years if you never switch it off.

Somewhat futuristic though the appearance might be, it seems that the styling may come to be quaintly old-fashioned well before the thing stops working.

Actually, I should pause for a moment and mention: what does a rating of 144,000 hours mean? Bang, one day in 2033 you’ll step into the room and find that the light has gone out?

No, not at all. First, doing actual longevity tests on a lamp that will last for nearly two decades is kind of out of the question, so the whole thing is done with a mixture of actual tests and modelling. The tests involve running the lamps for 6000 to 8000 hours and measuring how much the light drops off over that period. There are nearly 9000 hours in a year, so it takes quite a while to perform these tests. That yields a curve showing how the light output diminishes over time. Then you extrapolate using an exponential function.

Second, the end point isn’t: it won’t work any more. The end point is when the output of the light has reached seventy percent of the original brightness. So even in a decade and a half, you’ll be getting decent light, just not as much as it originally provided.

So how is the 144,000 hours achieved? Presumably Dyson uses very high quality components. But another important thing is heat. The biggest single life-shortener of LEDs, as it is for all manner of semiconductors, is heat. Dyson has built a “heat pipe” into the cross arm. It talks about “technology typically found in satellites”, but that may be talking things up a bit too much. What it appears to be is a copper bar or strip of some kind within the aluminium structure. Copper is a fine conductor of heat, so this allows the heat generated by the LEDs to be spread over a metal body some 400mm in length. And the copper is, in turn, in contact along its entire length with the aluminium beam which, by its very nature, is heavily finned, so it becomes an air-cooled heatsink.

The Dyson CSYS Task Light arrived with the vertical section attached to the base and the horizontal section needing to be attached, using three small screws and the included Allen key. I read the instructions three times to make sure because five small screws were included, and indeed the parts list identified the inclusion of five screws. I can only conclude that two are spares, in case one or two slip from your fingers during assembly and can’t be found.

Anyway, the assembly took less than five minutes. I plugged in the wall wart and was instantly rewarded with a bright and attractively warm light. This was the standard model with a 2700K light temperature. A “4K” model – 4000K colour temperature – is also available.

A tap on the touch sensitive button switches the light on or off. Holding your finger down ramps it from full to very low, then back up again, so you can set the brightness. Which it retains when switched to standby.

So what about glare? Well, this light is bright, and you are going to be dazzled if you shine the light into your eyes. But that turns out to be very easily avoided. Remember those conical reflectors? They certainly seem to work. It seemed to me, as closely as I could work it out, that the light is almost entirely contained within an irregular cone. The light seems to spread to the sides of the row of LEDs – that is, perpendicularly to it – at around 45 degrees, and from its ends at about 60 degrees. The cut off is reasonably sharp. So long as your eyes aren’t within that cone of brightness, you aren’t going to get much light, if any, directly from the LEDs. And you’re going to have to be quite the contortionist to get your eyes within that cone of brightness.

I see from the specifications that Dyson rates the “Beam angle” at 68 degrees, and it’s probably right rather than my eyeball-based “measurements”. The important point is that there’s a fairly hard cut-off between the illuminated and not-illuminated area.

There’s no doubt that the heat pipe works. The cross bar felt around the same temperature even at the furthest end as it was right next to the LEDs. With the lamp on full brightness, the bar was hot. Not so hot as to hurt when I held it, but clearly it was allowing plenty of heat to be dissipated. No heat that I could detect was transferred from the horizontal to the vertical bar.

Clearly $850 for a desk lamp is rather expensive. But the fact is that it does what it’s supposed to do with great elegance, both in looks and operation. And it’s apparently the kind of item that you ought to specify in your Will, because it may still well be working when you’ve passed on.