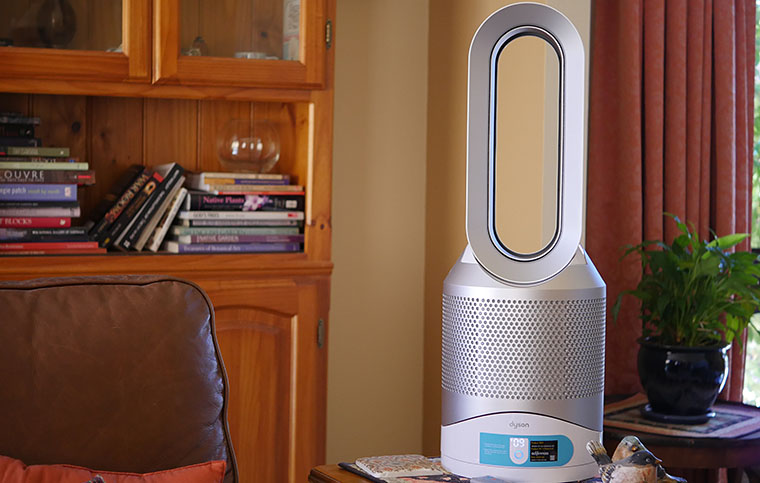 Dyson started, famously, with vacuum cleaners. But since the launching its own line of products in the early 1990s, it has moved into a wider range of devices: hand and hair dryers and room fans. The one commonality: they move air. The Dyson Pure Hot+Cool Link also moves air, but in addition to operating as a fan, it can heat the air if you like, effectively doing do the job of a fan heater. Furthermore, whenever it’s in operation the air is drawn through a filter to clean it.

The Dyson Pure Hot+Cool Link looks like precisely what you’d expect from Dyson, with its large loop fan and hidden blades. It stands 630mm tall on a round base that’s about 220mm in diameter. While its size suggests it’s most appropriate for putting on a desk or bench top, it can tilt up or down by perhaps ten or fifteen degrees so you can easily put it on the floor and have it direct its flow up towards you.

The loop – the fan section, if you will – occupied roughly half the height. The wider bottom part includes a large filter rated to PM 0.1, which means it captures particles as small as 0.1 micrometre – one ten thousandth of a millimetre – in diameter. This is rated to clean the air for twelve hours a day for a full year before requiring replacement. Try as I might, I couldn’t find the replacement on Dyson’s Australian website. On the UK one it was priced at around 50 pounds, so I’m guessing something approaching $100 here for a replacement.

The Dyson Pure Hot+Cool Link has a ten speed fan and can either run cool – that is, it just blows the cleaned air – or warms it first, acting as a heater. When running as a heater you can set the desired temperature to anywhere from 1 C to 37 C, and the unit will cease heating when it gets to the sought temperature.

Or you can just run it to clean the air in your room, with it switching off when an air quality target has been met.

It can oscillate through around 90 degrees. The flow of air from the fan can be thrust quite a way out into the room in “focused” mode, or spread out in “diffused” mode.

There’s a single control button on the front along with some LED indicators, but you’ll generally exercise manual control using the twelve key infrared remote control. In addition to the functions mentioned, there’s a “Night mode” which dims the LEDs and a sleep timer.

Oh, and it’s “Smart”, as I mentioned. That’s what the “Link” in the product name means. It can connect to your WiFi network and be controlled by an iOS or Android app.

For no particular reason I decided to put the app on a my current model eight inch Samsung Galaxy Tab A tablet running Android 6.0.1. I use this as a controller for lots stuff, so it seemed appropriate. But the Play Store informed me that “Your device isn’t compatible with this version.” I tried on a Samsung Galaxy S6 phone, and it installed smoothly on that. I checked the Apple App store using an iPad Mini, and it appeared only in the “iPhone Only” section of the store, not the “iPad Only” section. Yet the app’s description says “Requires iOS 8.0 or later. Compatible with iPhone, iPad, and iPod Touch.” It installed smoothly on the Mini. I did most of the testing using that device. I did quickly check out the app on the Samsung Galaxy S6 and it was virtually identical in operation.

The Play Store shows an average rating of 3.1 stars (out of 5) for the app. The App Store hasn’t received enough ratings to display a star score.

The first thing the app requires of you it to sign in or create a Dyson account (it’s free). That done, the app launched straight into a wizard for connecting devices. The first step was type of machine – Robot vacuum or Purifier – followed by WiFi network selection. This works only for 2.4GHz networks.

As is often the cases with this kind of thing, the app offered up the WiFi access point to which the iPad Mini was connected as the suggested WiFi network. So, in the interests of being a pain, I ducked out of the app, changed the WiFi connection to a 5GHz access point and then went back to the app to see what would happen.

Why? Not everyone is familiar with WiFi networks. Plenty of people who wouldn’t know 802.11n from Dolby Atmos would like the benefits of a classy Dyson product. So I do like to see how graceful products are in response to usage errors.

When I returned to the app, it asked for the WiFi access point’s password, which I supplied. However, the interface put style ahead of clarity, and given the long name of the access points with only 2G and 5G on the end to distinguish them, I could not tell which was being offered. I thought that perhaps the app was clever enough to see that the Mini was connected to a 5G network and choose an alternative. So I pressed on the the app told me, clearly and step by step, how to connect to the Dyson device’s own temporary WiFi access point. That done, the app tried to connect the Dyson Pure Hot+Cool Link to the WiFi network, and sat there for three or four minutes trying to do so before announcing that the connection had failed. So it seems that the app wasn’t as clever as I thought.

I cancelled out, connected the iPad Mini to a 2.4GHz access point, went back to the app and repeated the process. This time the app completed the connection of the Dyson Pure Hot+Cool Link to the WiFi network in less than a minute, before throwing me into an “Ownership” section, in which I could specify purchase date, product name and whether or not the device’s software should auto update.

And so then it was ready to go. At which point it asked my location. Why? Because it then reported local temperature and humidity (presumably drawn from some official database somewhere), in addition to indoors temperature and humidity measured by the Dyson itself. Oh, and the quality of the air, both indoors and outdoors. For indoors this was reported as “Good”; for outdoors both qualitatively (“Very Good” as I type) and numerically (“19”, whatever that means).

So is the app useful? You don’t need it if you just want to run the Dyson Pure Hot+Cool Link like a manual fan/fan heater. All its immediate control functions can be duplicated with the remote control.

But in addition to telling you what your air quality is, and making changes to how the unit is operating while sitting in a different room, it offers very useful scheduling features. You can set up recurring or one-off programs, including setting things like hot or cold, fan speed, whether or not the unit should oscillate and so on. These can be done for different days of the week and there didn’t seem to be any limit to the number you can set up.

In addition, you can check on the life left in the filter as you go, and get statistics on air quality over time.

Obviously the smart functions lift the unit’s capabilities, as described. But just using it with the remote, the Dyson Pure Hot+Cool Link did a fine job. It was capable of pushing quite a lot of air through its loop, able to be felt six metres away when in Focused mode. It also pumped out plenty of heat. On a cold evening it could get my office from 15-ish up to the early 20s in half an hour.

The amount of noise generated depends on the fan speed. At one or two is is very quiet, but even at 10 it is considerably quieter than a typical fan pushing the same amount of air.

Because of the filter, it’s impossible for dust to get into the heating element, so there was never the slightest hint of a burning smell.

It has sensible protections. The heat switches off if it topples, or it it has been left running for nine hours without intervention (presumably on the assumption that you’ve accidentally left it on when you’ve gone on holidays). If you find that doesn’t work with your normal mode of operation, remember that you can go back to the app and schedule the heat to come on an hour before you get home.

The instructions say that you can put the remote on top of the loop where it will be held by a magnet for safe keeping. Well, yes, sort of. It’s a pretty weak magnet, and if not placed just right it can easily start to slide down the loop and fall right off. That’s what it did for me.

Apart from that, the only real possible problem with the Dyson Pure Hot+Cool Link is pricing. But there’s not much to which it can be directly compared, so it has a relatively free hand with pricing. If $749 doesn’t deter you, then you’ll be very pleased with the result.

Overall
8.6
Features
9
Value for money
7
Performance
9
Ease of Use
9
Positives
Produces good clean air; both versatile and easy to use; able to schedule one off and recurring actions; pleasing styling
Negatives
Fairly expensive
8.5