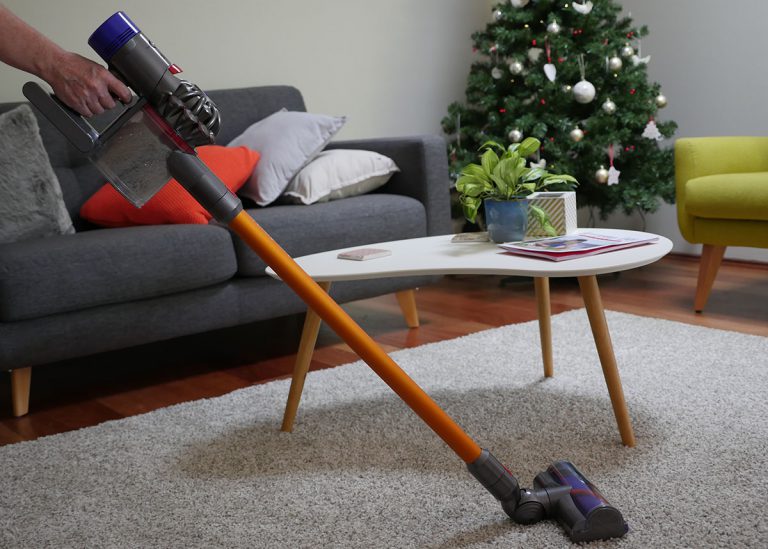 We’ve looked in the not too distant past at the Dyson CSYS desk lamp, and at a pretty fantastic Dyson WiFi fan/heater. But of course Dyson first became well known for vacuum cleaners. It has what I guess would be the equivalent of “barrel” type cleaners, and also uprights. But here we’re looking at one of its “cord free” cleaners, which it also groups into its “handstick” category.

Let’s be clear. The Dyson V8 Absolute+ is not a small hand cleaner for quick spot cleans. It is fully capable of acting as the main vacuum cleaner in the house, despite being rechargeable.

The Dyson V8 Absolute+ is current top of the line in the Dyson handstick range. The V8 series are the most powerful, with the longest lasting battery. The V8 Animal ($799) is the entry level model. The V8 Absolute ($899, but currently on special at Dyson’s website for $699 as I write) is essentially the same but adds several attachments, including a powered head for hard floors. The review model, the V8 Absolute+ adds some more attachments, and includes a carry bag for them.

Before detailing the attachments, let’s look at the core system.

This is the handle, motor, battery and debris container. This whole section weighs just 1.6 kilograms. A trigger has to be held in the whole time to operate, there being no lock. There are three levels of filter: a perforated metal foil stops all larger material; a washable fine filter stops the smallest of dust particles which make it through the foil, while a filter after the motor and fan gives the air a final scrub before it’s expelled. Dyson’s signature “radial cyclone” air flow system is used to increase efficiency and there’s a lot of sound damping in the unit to keep noise down.

The debris container is a little over 100mm in diameter and can be filled to a depth of 35mm. This isn’t the kind of thing that you empty after a month or two. You’ll be emptying it after each use, and perhaps more than one time per use if you’re doing a big cleaning job. Fortunately it’s really easy to empty.

The battery is rated at up to 40 minutes of operation. Dyson doesn’t hide that this depends on the mode. There are two speeds selectable via a switch on the main body. “Powerful suction” is the lower power mode. It’s in this mode that you can get up to 40 minutes using the various non-powered tools and attachments. If you’re using one of the powered heads, that reduces to 25 minutes.

But if you do need more power, Max Mode reduces battery life to just 7 minutes. So think of that as a kind of turbo boost, to be switched on as required for difficult parts of the cleaning task.

The battery, incidentally, is described by Dyson as using Nickel-Cobalt-Aluminium technology. It is nonetheless a Lithium Ion type, but one that is noted for offering high energy density and long life, but is considered in the industry to be a little less safe than some alternatives, and quite a bit more expensive. Apparently this technology is used in electric vehicles, including Tesla cars.

That would explain in part the fairly high cost of the unit, and we’ll just have to trust that Dyson has managed the safety side of things. As we reported four years ago, when a problem does arise with Dyson products it is quick to recall and fix things.

The Dyson V8 Absolute+ consists of the following parts:

The last five items in this list are those which separate the Absolute+ from the Absolute.

The powered heads are provided electrical power via wiring built into the extension tube, rather than being driven by a belt or some such.

I have a general worry about battery life. I always have in the back of my mind how much power a device might have left. Whenever I set up a new phone, one of the first things I do is make sure that the battery indicator has the percentage showing. The icon it far too coarsely grained to satisfy me.

So the thought of “just” forty minutes was slightly disquieting to me. But, as it turned out, that proved to be plenty of time.

Now, to be fair, if your home is large and been left uncleaned for a while, you may need a couple of goes. But for those of us who like to apply a light touch every so often, the Dyson V8 Absolute+ vacuum cleaner proved plenty to look after the whole home.

You will want to install the dock on a wall somewhere near a power point – in the laundry perhaps – because then it positively encourages you to just grab the thing and give a little touch up clean whenever you see a swirl of dust or fur on the floor. That’s what I found myself doing.

But, you might ask, won’t you want to use the Max Mode most of the time? And the answer is no. In fact, I didn’t like using that mode with one of the power heads because the suction was so strong, it was hard to push the vacuum.

It did come in useful for burst of power when I was cleaning the car’s interior. Indeed, I don’t think I’ve ever managed to get the car’s carpet – with it its notoriously clingy carpet fibres – so clean before. And of course there was plenty of battery life for that.

Throughout, the vacuum was highly effective. The hard floor cleaner head proved so effective – something I’ve always found to be a troublesome task for vacuums – I think I’ll be retiring my broom.

And throughout it was much quieter than my upright and my workshop barrel cleaners, yet suction seemed to be at least as strong.

Another thing that this vacuum encourages you to do is change heads or tools to the appropriate one for the task at hand. That’s because they just click on and off with virtually no force required. I’m used to really jamming in the sections of a vacuum cleaner, since they’re almost always held in place entirely by friction. The Dyson system was a delight to use (although, do remember that you’re not going to be able to use generic attachments).

Emptying the debris container was a work of seconds. Just pull up the handle, give it a shake, and push the two parts together again.

I was somewhat sceptical about the effectiveness of a light weight hand held vacuum cleaner. But the Dyson V8 Absolute+ quelled that scepticism simply by being highly effective at what it did.