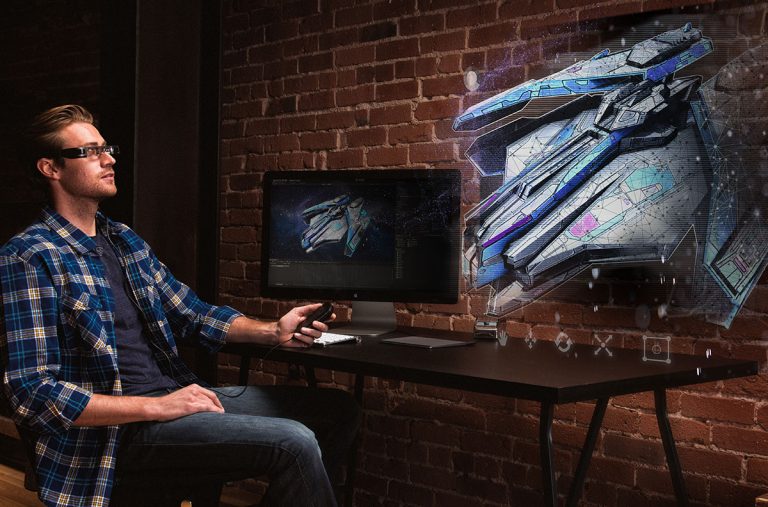 A month ago we had a little look at Epson’s new augmented reality glasses, the Moverio BT-300. And now I have a set right here on my desk. Sadly, I don’t have a drone to use them with, but let’s see what else we can do with them.

To recap, augmented reality eyewear differs from virtual reality in one major way. The latter blocks out – is indeed supposed to block out – the outside world. It is designed to create a new, different world for you. The outside world would just get in the way of that.

Augmented reality works with the outside world. You see it right through the lenses of the eyewear, quite unaltered, except that there’s an overlay of images provided by the glasses. It might be live footage from the drone that you’re controlling, a feed from a microscope camera you can use when conducting fine work, Google Maps giving you visual directions. One thing I can say with confidence: there’s no way I or anyone else can predict the full range of uses to which this device will be put.

The BT-300 comes in essentially two parts: the lightweight glasses themselves, which weigh only 69 grams, and the “controller”. A cable – it’s about a metre long – tethers the two. All the processing stuff is inside the controller, a phone-sized module.

In fact, you can think of the controller as a fairly straightforward Android device (it runs Android 5.1) and the glasses component as its display. It has the regular three control buttons of an Android device, plus a touch sensitive arrow cluster, an enter key and a trackpad. Unlike a regular Android device, you’ll often be wanting to select items in the display without actually looking at the device, so having these control options is rather useful.

It is powered by a 1.44GHz Intel Atom X5 quad core processor with 2GB of RAM. There’s 16GB of storage built in, plus a slot for a microSD card of up to 32GB.

Those specs might seem a bit light compared to current generation Android phones, but they seem to be adequate to the tasks required of the unit. In the vitally important area of communications, Epson hasn’t held back, going with full 802.11ac, dual band WiFi. Bluetooth 4.1 LE is also supported. The Miracast WiFi connectivity standard is built in as well.

A five megapixel camera on the right hand side of the headset allows you to take pictures or videos.

The glasses work by cleverly projecting the image into the glass of the eyewear. OLED panels are used to provide a massive contrast ratio of 100,000:1 and the resolution of 720p, or 1280 by 720 pixels.

A pod on the connecting cable between the glasses and eyewear has a coat clip and a socket for earphones/microphone. A set of those is provided. Of course, you can use Bluetooth instead if you prefer.

Other accessories provided included a carrying case, two tinted covers for the glasses – one of them very dark. These allow for a more visible display in bright conditions, although the really dark one can in most circumstances turn the glasses into VR googles, by largely bocking out what’s beyond them. There’s also a clip-in frame for vision correction lenses. If you find you can’t focus on the display, you can have your optician fit suitable lenses to these.

A wall charger is also provided, although you can use a computer or pretty much any standard USB power supply.

Apparently it takes five hours to charge up the first time. As the set arrived with me, it had been charged and previously used. I did a factory reset so that I’d be closer to the conditions of the new purchaser. BY default there were only a small number of apps installed, including email, gallery (ie. picture viewer), clock, a calculator, music, browser and so on.

You probably won’t be able to load your favourite apps, even though they’d likely be compatible, because there’s no access to the Play Store. Instead there’s an Epson Moverio store with a limited number of apps, perhaps a couple of dozen. I also went to the usual settings to try logging onto my Google account. There didn’t seem to be any provision for that. So it’s kind of a closed system. I would have liked to install some benchmark software, but with no Play Store that was not possible.

I also couldn’t install OneDrive, which is my preferred way of transferring photos between devices. Later I found that there were no problems with just plugging the thing into a Windows computer and using Explorer on the computer to copy photos and such from the DCIM folder.

They were of indifferent picture quality, and presented with a resolution of 2560 by 1920 pixels. This isn’t the device to choose if you want the best possible photographic quality, but they are useful enough to document stuff.

The apps had a clear bias towards those making use of the particular abilities of the Moverio BT-300 system. For example, there’s a VR architectural app. It’s limited to just one room, but you can wander around in it and look in any direction.

When I was “playing” the Edmonton Trolley Car “game”, in which you wander around early twentieth century Edmonton “talking” to people and riding trams and getting a kind of history lesson in the process, I thought there may have been another control function within the controller: an attitude sensor. In this game you hold the controller upright. Tilt it forwards and you move forwards; tilt backwards and back you go. I was thinking It wasn’t an accelerometer because you keep going forwards as long as you maintain the forwards tilt. But inspecting the specifications failed to reveal this special sensor, so I’m guessing that it was the accelerometer at work after all, and that a movement model worked out attitude.

A real game, The Age of Diamond, was presented in real 3D – that is, with an individually rendered image for each eye to create an effective 3D look. This surprisingly interesting game was entirely hands free. You just move your head to align a marker with where you want things to happen.

And that is the essence of this headset. It tracks your head movements so you can control things, or look around things, as provided in the app.

Visibility? In a darkened room the OLED really came into its own with thoroughly convincing blacks and bold, engaging colours. Inevitably the effect was less impressive with actual light visible through the lenses. That said, the presented image was clearly on a different focal plane to the world out there, so by focusing on the displayed image, it was far more visible than I would have thought from the contrast against the background. Remember, you have those snap on darkening filters too, just in case.

As for that focus: these days I use reading glasses for close up work, but I found I didn’t need them for using the Moverio BT-300 system.

They also proved fairly comfortable to wear, thanks to the light weight.

A touchpad is a fine control device in its own way, and the one on the controller works rather well, with a nicely textured surface and well-judged mapping of finger movements to on-screen – in eye? – arrow movement. Nonetheless, it is nowhere near as efficient in use as a touch sensitive screen. One of the first things I did was to log onto my WiFi network, of course, and after four characters of hunting and pecking on the virtual keyboard as I tried entering the password convinced me to bring forward another aspect of testing.

Does it support Android On-The-Go? I plugged in a USB adaptor and then the dongle for a wireless keyboard and, yes, it does support OTG. I was able to rapidly key in my password.

All that said, navigating through menus and screens was easy using the multitouch capability. Two finger up and down swipes took me swiftly up and down through menus and screens. Two fingers side by side, swiping sideways, flipped between screens. By default Apps reside in an App section, but any of them can be easily moved to a home screen, or other screens accessible to either side.

The Moverio BT-300 supports Miracast wireless connectivity, both as a source (that is, the transmitter) and as a sink (that is, as receiver). It worked fine, connecting to a Microsoft Wireless Display Adaptor and mirroring its display to the TV into which the Adaptor was plugged. Likewise, I could mirror the screen from my Samsung Android phone to the Moverio.

As it presently stands, the Epson Moverio BT-300 is a mature product with generally fine performance, really only awaiting more apps. I mentioned earlier the possibility of using Google Maps, but it turns out that this wasn’t available. I guess the lack of 4G connectivity convinced the Epson people it wasn’t worth putting in there, but I had every intention of using my Android phone as a Wireless Access point and checking it out.

But I would not be surprised to see some killer app appearing, offering some capability I can’t presently imagine, and taking this from an interesting device, with particularly useful functionality with drones, into a must have.