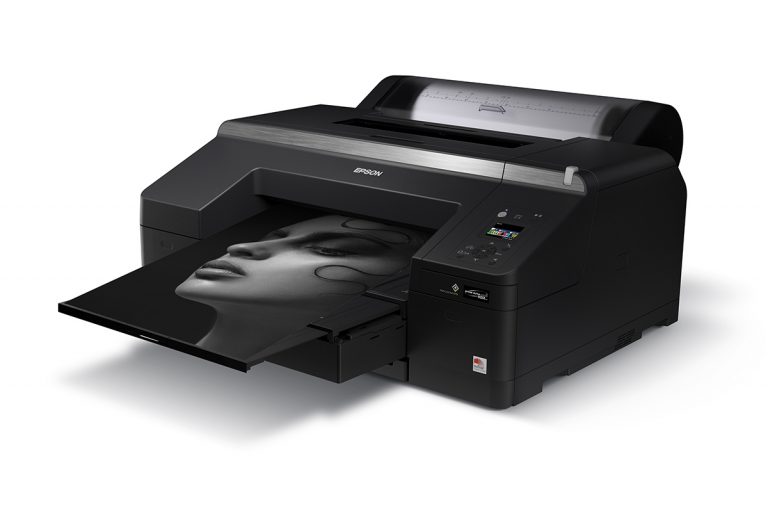 I learnt a valuable lesson the other day: when Epson mentions things like large format printers, I should pay attention to the word “large”. You see, I wrote a little about the Epson SureColor P5070 printer six months ago, and three months later wrote about how it had won the award as “Best Photo Printer” of 2017 from the Technical Image Press Association, so I thought it would be fun to review it. But failed to consider that magic word “large”.

When it arrived, it was on a wooden pallet. Seriously. Not in a box in the middle of the pallet, but a box occupying just about the whole thing. And the box was 600mm tall. And warnings recommended that it be moved by four people

So it turns out that the Epson P5070 really is a serious, serious printer indeed. Large format, high quality print. Just remember, you’ll need quite a bit of space.

Now, before getting to a detailed description, let me mention the price. It costs $2995 in basic trim. You can add extended on site warranty options for three (bringing it to $3445) or five ($3895) years. Or if you want even higher quality you can add the attachable “Spectroproofer” which guarantees colour performance. This adds $2700, $3000 or $3300 to the cost, depending on the choice of warranty.

I am astonished by the base cost. Not because it is high, but because it is low. For years $3000 was about what you could expect to pay for a 300dpi monochrome laser printer, and that was when three grand was worth a lot more than it is now.

With the Epson SureColor P5070, professional level prints up to A2 size – or banners which are even longer – are available to the enthusiast. If you’re the kind of person who’ll spend $5000 on a camera, $3000 on a printer doesn’t sound unreasonable.

The printer has a 17 inch wide print carriage. That, as indicated, allows it to accommodate cut sheet paper that’s up to A2 size – which is 420mm wide by 594mm long. That paper can be loaded into a cartridge under the printer, or in the case of thick stuff, fed manually. But it also comes with a paper roll feed, which can hold thirty metre long rolls of 406mm wide photo quality paper.

The printer packs eleven Ultrachrome HDX ink cartridges. Unfortunately, it looks like only 80ml “starter” cartridges are included, rather than the 200mm ones you’ll be replacing them with as they expire. And you can expect to use a significant proportion of those in “priming” the printer for the first time (filling up the tubes that takes the ink from cartridge to print head). They are individually replaceable, of course. If I’ve read Epson’s website correctly, each costs $139 to replace. These eleven come in two options. Both come with green, yellow, cyan, light cyan, vivid magenta, vivid light magenta, orange, photo black, matte black and light black. The final cartridge varies depending on how you intend to use the printer.

The review printer already had all the print cartridges installed – it had been well used — and it was using the Light Light Black set, rather than the Violet set. The only difference between the two sets is the one cartridge which, you won’t be surprised to read, is Light Light Black or Violet. The latter allows for a greater range of colours because with a touch of violet in the mix, the colour gamut can be stretched in new and interesting directions. The former adds to the Photo Black and Light Black cartridges to improve lighter parts of the picture when you’re doing monochrome photo printing.

As I was to discover later, the photo black and matte black colours are also alternates. Both are placed in the printer, but only one is switched in at a time. If you select the other in the printer driver for a particular job, you have to press a button on the printer to tell it to switch blacks.

The printer uses Epson’s PrecisionCore TFP print head with ten colour channels (thus the need to switch between blacks) and 360 nozzles per colour. It can deliver a maximum resolution of 2880 by 1440 dots per inch.

There’s a 69mm colour LCD display for showing the menu, and displaying printer status. You connect to it via USB or Ethernet. Gigabit Ethernet is supported so there are effectively no delays in sending picture data to the printer. That’s what I used.

As I mentioned, the printer came used. That made things easier for me in one sense because there wasn’t the whole process of pulling sticky tape off moving bits, installing eleven print cartridges and so on. But there were a couple of heart-in-mouth moments as things didn’t go quite as expected.

For example, the installation software, which I’d installed on my computer, failed to find the printer on my network. That’s the kind of problem I expect with WiFi connections, not Ethernet ones. So I went to check the network settings using the printer’s menu, and found that it won’t display its status, but will print it out. But when I tried that, the printer reported a paper jam. It turned out that the paper roll, which was already on the spindle, had come loose at one end. Pushing it firmly back in fixed that and out popped two pages of status text, printed on beautifully shiny, photographic paper from the roll.

It was soon apparent that a static IP address had been given to the printer … one that was incompatible with my network. I switched it to “Auto”, used the network restart option, and thirty seconds later the installation software had found the printer and set everything up.

Before moving onto to actually printing, I’ll note here that when I returned to use the printer again the next day, I found that it had put itself to sleep, so I started it up. But the driver software reported a communications error. I printed out its status and found that it had changed its IP address. I tried to change it back on the printer – that is, assign a static IP address – but I couldn’t get it to stick. So I found the IP address in Windows settings (Settings, Printers & Scanners, Epson SC-P5000 Series, Manage, Printer Properties, Ports tab, Configure Port – and there you’ll see a box to change the IP address.)

Those IP address issues are unlikely to trouble normal users. A new printer won’t come with a static IP, and shifting the automatically assigned address might have had something to do with my network. Those matters aside, the communications with the printer were very snappy. I could also type in the IP address into a web browser to do things like inspect device settings and ink levels and such. But normally you’ll just use the driver information panel (or even the colour display on the printer) to see ink levels.

Epson supplied plenty of paper, and there was enough ink in the cartridges to allow me to have my head, more or less, in printing quite a few of my favourite photos. I did everything using Adobe Photoshop, so others’ mileage may vary.

I guess one might develop a work flow if you’re doing the same kind of printing all the time. But I was doing all ad hoc work, so I found that a three step process worked best. First, I’d decide what type and size of print I wanted. Then I’d resize the picture for the size. Not resample it. No pixels were damaged through this process. But a photo does contain a resolution setting that controls how those pixels are turned into physical dimensions on paper. So I’d set that for the right dimensions (and have “Resample” de-selected).

Then through the print dialogue I’d go into the full print settings and choose the paper source (manual feed, roll or cassette) and size and paper type. (The printer optimises the laying down of the ink differently for, say, matte fine art paper than who it does for high lustre photo paper.)

The photos I used were mostly around 12 to 16 megapixels, and the results were simply amazing. At the very least as good as you can get in any photo shop. I turned a five year old wedding photo to black and white and printed it on A2, virtually filling the whole 420mm by 594mm surface. The graduations in grey were smooth, the blacks deep, the detail glorious.

An Eastern Rosella came out on the high lustre paper from the roll with its colours bright and powerful, while a Galah on a nearby light pole had subtle greys and pinks just about perfect. Sixteen megapixel pics came out very well on A2, and really popped on A3.

The convenience of the paper roll paper was first class. Manually loading the heavy weight (they were 330gsm) cut sheets wasn’t hard, and the display on the printer talks you through it. But just printing to the roll – and it cuts off the sheet after printing – made this my preferred option except for special jobs. I was able to print a panorama shot I’d taken on my phone, and even at one metre length it was exceptionally sharp. I was tempted to take it up to two and a half metres in order to use the full width of the paper, but I figured I’d never find anywhere to put it.

Print speed? Not bad at all. A full colour A2 sheet of exquisite high resolution printing took around five minutes.

For this quality some of the papers can be quite expensive. The Fine Art A2 sheets are available in boxes of 25 and come to about $7 per sheet. A 30.5 metre roll of Signature Worthy Premium Lustre 16 inch paper will cost $187. That’s what you pay for quality paper.

If you’re the kind of person who gives a high financial priority to your photographic hobby, you will find that this printer probably isn’t out of reach financially, and will allow you to produce truly professional works. On one proviso.

You will need room. Quite a lot of it. The printer itself is big, but with manual feeding and making room for the output, there needs to be even more room at the front and back.

But if you can find the space, you’ll love it.