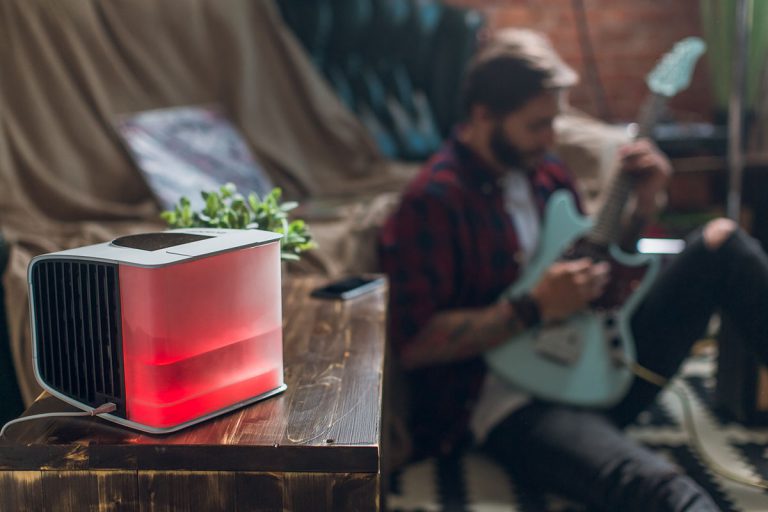 A few weeks ago we mentioned, as we then called it, the Evapolar evaSMART EV-3000 intelligent personal air conditioner. Now we’ve got our hands on one and have been able to play with it for a few days.

There are two different aspects to this device. Conceptually, it breaks down into the personal air cooler part and the “intelligent” part. By which we mean WiFi connected and controllable.

Air conditioner? Air cooler? In a sense, a bit of both. It does not heat air, but it does both cool it and purify or filter it. At its core, the evaSMART is an evaporative air cooler. These work by drawing water from a reservoir, dampening some material with it, and then driving the air through the damp material. This causes some of the dampness – the water soaked into the material – to evaporate, using the heat energy in the air. That causes the air to cool. So the air emerges from the other side more humid because of the water vapour it has picked up, but also cooler than when it went in.

The advantages of this over heat-pump style air conditioning are lower energy consumption – and thus reduced running costs – and no need for venting of the heat drawn from the air to the outside world. Thus it can be placed almost anywhere.

The disadvantage is that its effectiveness depends very heavily on the humidity of the air. Remember, high humidity means high water vapour content. If that’s nearing the capacity of air to carry water vapour, relatively little cooling will be achieved.

The evaSmart is almost cubical, albeit with sculpted edges and corners. It measures 184mm by 217mm by 207mm. A water tank on the side – you can take this off easily for filling – can hold up to 1.3 litres of water. This is also lit by LED lights, which can be set to just about any brightness or colour – although the colours are limited to moderate intensity. The visual effect is to make the water glow.

The tanks require refilling every six to eight hours of use. Inside the main body is the “cartridge”, which is a concertina material which holds the water, and filters the air. A fan draws the air through it and propels the cool air out one side. The cartridge lasts for three to six months, when it must be replaced.

A touch panel on top provides control of the fan speed, and colour and brightness of the LEDs. A mechanical slide on the side adjusts the vertical angle of the air flow.

Power is provided by a USB power adaptor: 5 volts and 2.5 amps. Evapolar mentions the USB socket on a PC, but 2.5 amps could well be pushing it for many USB 2.0 devices.

The power draw is 12 watts. Evapolar says that the “cooling power” is 100 to 400 watts, and reckons it’s good for cooling a square up to four square metres, which is two by two metres. This is, as the name says, a “personal” air cooler. It isn’t intended so much for fixing in a room to cool a space, but to blow cool air directly into your space.

But why not take advantage of those additional capabilities? For that you need to install an app.

I installed the app onto my Android phone. Later I tried to find the iOS version using an iPad Mini 4, but the app store kept reporting that there was no such app. I didn’t have access to an iPhone to check with that. It’s surprising, though, that the app wouldn’t be enabled for iPad use. The Android version was available in the Play Store for an 8 inch Samsung Tab A, although it did note that “This app may not be optimised for your device.”

Anyway, I just went on with the Android phone version.

Then I ran into a brick wall. On starting the app. It gave a choice of logging in via Facebook, or signing directly in, with a subsidiary “Create profile” for the latter. I chose to create a profile, and at least a dozen goes across three days, all ended in a red bar across the top of the screen saying “Something went wrong. Please, try again”. I was about to give up on the smart aspects of the device when I decided that I might as well use the Facebook logon.

That worked, but if you’re not a Facebook person well you may well have trouble. There was no other way I was able to find to proceed past the opening page.

At this point I should note two things. First, the user rating on the app in the Play Store is a woeful 2.2/5, due in large part to a lot of 1/5 scores. There are quite a few complaining reviews about inability to log on other than by means of Facebook.

Second, Evapolar appears to take these things seriously and has responded to each of those comments. If that issue can be fixed, it seems likely that it will be. Meanwhile, it says that users can email it about an inability to create a profile, and it will fix that for them individually.

Once into the app proper, it was just a matter of following the instructions to “Add” a device. That involved connecting to the evaSMART, with it acting as a WiFi access point, and giving it the necessary credentials.

The app doesn’t show the signal strength for the wireless access points on offer. As it happens, I use the same name for both the main router in my office as well as the access point in my house. (That’s best recommended practice, as it makes for more seamless switching of devices from point to point). That name appeared twice on the list of offerings. Which one should I choose? It was impossible to distinguish between them without a signal strength indicator.

I chose the first one on the list, thinking that’d be the best. But it would not connect. I went through the process again and chose the second one, and that worked fine.

Things went a little flaky one morning when the Internet was flicking in and out, as happens occasionally around here. The cooler would just switch off for no apparent reason. The first time, I found it using the app and switched it back on that way. When it happened the second time, the app was unable find the cooler. You might have problems without an Internet connection … at least if you’ve done the app connection. Presumably if you ran the unit as a standalone system, not connected to WiFi, there’s be no such problem.

Since I was having trouble reconnecting, I decided to start from the start again by restoring the unit to factory settings. The manual said to hold down the power and up and down buttons all at the same time for five seconds. But as far as I could tell, all three buttons are only displayed at the same time briefly when you first switch it on, and that procedure did not work.

Anyway, a couple of hours later the Internet settled down, and the cooler was working like a dream. The first test: aesthetically my beloved approved, which is not something is readily achieved by the devices passing through my office. She was even willing to have it in the house.

Secondly, apart from the missing combination of virtual keys required for the factory reset, the touch sensitive controls on the top worked very effectively. The text and indicators were large and clear. It was intuitive in operation. Holding down the fan speed adjustment had it accelerating.

The controls in the app also worked very well. It was clear. It was not something I tested, but the quick start guide says that the evaSMART also works with Google Home, Amazon Alexa, Samsung Smart Things and Apple Homekit. Time was short, instructions were not provided, so I skipped all that. But later I noticed a response from Evapolar to a comment in the Google Play Store, written since most recent app update at the end of October 2017, that it “is working hard at Google Home integration and hope it will be available soon.”

As for cooling, it could indeed knock a little bit off the temperature in my office, but that is a volume perhaps seven times what the device is rated for. What it provided ideal for was for putting it a metre from me, and just having it blow on me as if it were a fan.

But it isn’t just a fan. It wasn’t room temperature air being blown on my, but air that was consistently four or five degrees cooler than the room temperature air, making my really rather comfortable in what was an otherwise hot room. And that was on some fairly sultry, warm days. On a hot summers day, I can just imagine the relief the evaSMART would deliver.