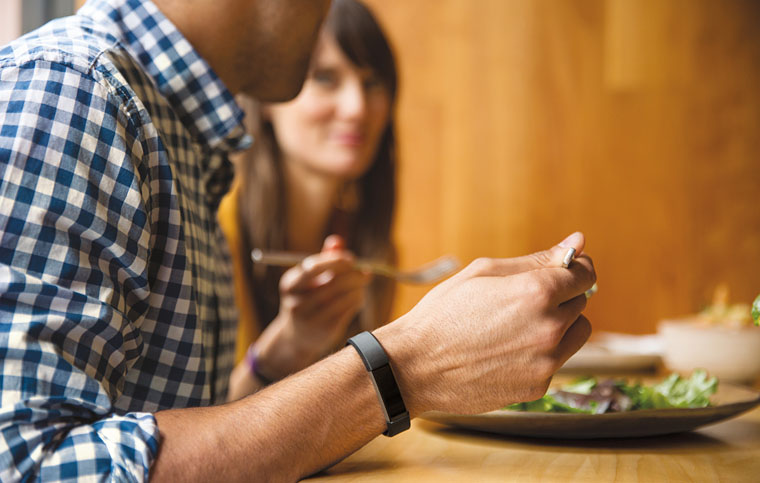 Perhaps the new wave of smart watches will threaten the producers of fitness bands. Perhaps not. But for whatever reason industry veteran Fitbit continues to release new and improved models of its ‘Trackers’, some of which are themselves encroaching on smart watch territory.

Here I check out the Fitbit Alta, a $200 not-quite basic unit with a twist: you can change how it looks.

The Alta is a nicely slim unit, thanks to its display running in line with the band rather than across it. The band is just 12.5mm wide, and the body of the tracker a touch wider at 15mm. That means you can bend your wrist back without anything digging in.

The display is monochrome, white on a black background. The standard information can be configured to show vertically, so you don’t have to twist your wrist when you lift it to inspect your data. Or horizontally for a more traditional look. The band itself is replaceable, either for practical or fashion reasons. The standard band is black and has a plastic/rubber feel. Options come in Blue, Plum and Teal. There are also premium hide leather bands in graphite and pink. Replacement bands start at $49.95.

Tracker is actually quite an appropriate name for the Fitbit Alta. As with most of Fitbit’s devices, the Alta’s central task is to gather data about you. In this case, it’s about your movement, although not your heart’s movement, since it lacks that monitor. The gathered data is sent to a computer or smart device, and indeed your account webpage at Fitbit itself , where it can be inspected, tracked and graphed. Goals can be set and rewards (in the form of the display flashing and vibrating) can be given.

Fitbit is primarily a hardware maker, so it doesn’t mind if you’d like to use someone else’s app instead of its own one. On its web page it highlights 34 apps which work with it and boasts of its “Open API” (application programming interface), encouraging the creation of more apps to work with it.

But I’ll stick with using Fitbit’s own app. This is available for Mac, Windows, iOS and Android. Should you want to study the intricacies of using an Alta, an online manual can be invoked from app.

There’s also a Fitbit Premium membership available for just under $60 annually. This allows you to download your data in spreadsheet format for conducting further analysis, compare yourself with others, and a few other perks.
Fitbit says that charging time for the Alta is a couple of hours, and that the battery is good for five days. That’s useful because it means that you can use the sleep quality function (this works by detecting movement) most nights rather than having to take the Alta off to charge it every night.

Setting up proved to be extremely easy, thanks in part to me already having a Fitbit account. The Alta turned out to be compatible with the dongle for my HR Charge that was already plugged into my computer. If you’re using a mobile device – phone or tablet or computer – you don’t need the dongle. Bluetooth will do the trick.

I fired up the Fitbit app on the computer, chose ‘Account’ and clicked on ‘Set Up a Device’. Within a second the app screen informed me that the Alta had been found, and then held my hand quite comfortingly as it guided me through the setup. That included giving it a name, informing it of the wrist to which it is attached (the algorithms must differ for lefties and righties), and letting it know whether you want its text to be displayed horizontally or vertically (the default). You do all that via the app of course. The Alta itself has only one single control: the tap.

This was a little bit of a culture shock after having become accustomed to the HR Charge with its touch screen and control button. You control the Alta in three ways. First, you flip your wrist up to look at it. That brings it to life and shows you the clock. With the Charge HR I’d never quite mastered doing this well enough to get it to work reliably on the first go. You can see how Fitbit would be striving for a balance between having it easily triggered for your convenience, but not so easily triggered as to cause the battery to be depleted by unnecessary switch-ons. I found the switch on seemed to work more reliably with the Alta.

The second way, you double tap it with your finger, moderately firmly, and that also brings it to life and shows you the clock. The third way follows either the first or second way: you tap it once to move to the next display screen. It cycles through the number of steps you’ve taken, the kilometres moved, the calories burnt and number of minutes elapsed in exercise.

There is no control to mark the start and end of a specific exercise session. The Alta is designed to recognise that itself, and is triggered after 15 minutes of activity. It detects walking, running, use of a bike, an elliptical machine or some other kind of sports or aerobic activity. You can change the trigger time to something longer or shorter in the app if you like.

The band is secured by a couple of metal studs on one end of the band being pushed through holes on the other end. Initially this was very hard to do, but it seemed to wear in reasonably quickly. The Alta did seem well secured, and after the initial easing, it didn’t get any looser.

The charging cable – any USB port is fine – was enormously improved over that on my Charge HR. That one has a plug that has to be inserted very carefully, the right way up, into the socket with no positive sense that insertion is complete. On the Alta there is a clip to hold the plug in place, and it is obvious the way it all goes together. What is a trial on the Charge HR is no task at all on the Alta.

The recording activity seemed accurate as far as one can tell. I am always mildly surprised by the counts, but on the occasions I try to think back on my day’s activities systematically, I realise that the figures are in accord with what I actually did. The display was reasonably clear. With vertical orientation the text was large and nicely formed. However it could be difficult to perceive with any sunlight at all falling on the Alta.

Using the Fitbit app on my phone I could have the Alta vibrate and report incoming phone calls (number or contact information displayed), text messages (the text scrolls across the screen) and appointments. So kind of a smart watch then. One really nice smart feature was the proximity unlock capability. My Android phone could be set to remain unlocked whenever it was within spitting distance of the Alta. And since the Alta was on me, the phone could be opened with a swipe instead of an unreliable recognition of my fingerprints. You can also set the Alta (via the app) to produce a vibration alarm at a set time or times.

These features reduced the battery life on my phone only a little so they were well worth using.

One long-time ongoing weakness of the Fitbit system is the company’s insistence on using Calories for energy measurement. You can set it to metric for distance measurements and for your body weight, and even for water capacity. But despite requests by many users, the option to set kilojoules is not provided even though that’s the standard measure in Australia. Users will need to quadruple all the energy figures (or multiply by 4.18 if more precision is required).

The sleep graph is also a little basic compared to those produced by several phone apps.

The Fitbit Alta is an effective activity tracker, well shaped for comfort, and with a good range of features. So long as you don’t want heart rate monitoring as well.