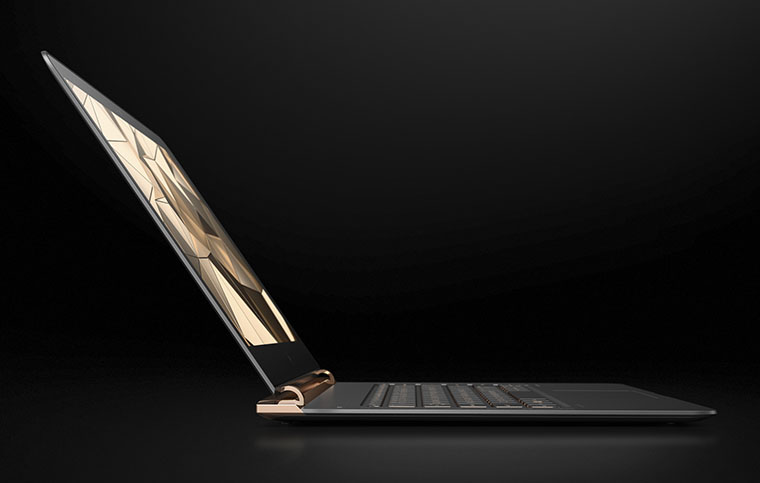 Got a bad case of Apple envy, but your circumstances force you to use Windows? Well, has HP got something for you: the HP Spectre 13. Just remember to keep quiet about one or two aspects of it when boasting to your Applish friends.

Now it’s kind of appropriate that HP should be taking on Apple in this way. Back in the day – the mid 70s to the early 80s, when HP was short for Hewlett Packard – HP was the kind of Apple of its day. The big two programmable, scientific calculator companies were HP and Texas Instruments. It was HP that was making the stylish, quirky and astonishingly well built products. There was a feel to the keypad on an HP calculator that has never been replicated by anyone else, and many people still use their HP forty years later. Quirky? I’m not even going to try to explain Reverse Polish Notation.

HP calculators cost quite a bit more than TI calculators of equivalent power, and its products were supported by a coterie of enthusiasts for whom the answer to any calculating question was always: Hewlett Packard. Remind you of anyone?

That was then. This is now. In what ways does the Spectre 13 compete with a Mac?

First and foremost: style. Most impressively, HP hasn’t tried to me-to Apple. It looks nothing like anything that ever came out of Cupertino. The dark grey (HP calls it “Dark Ash Silver”) and gold finish is rich looking, yet tasteful. Anyone who notices computers is going to notice this one, and be impressed.

Part of style is the matter of dimensions. Width and depth are similar to any 13.3 inch subnotebook computer. But thickness: how does 10.4mm sound? At the time of launch, that was thinnest on the market. Apple’s ultrathin, the 12 inch display MacBook, is 13.1mm thick. The MacBook Air is 17mm thick. The MacBook Pro is 18mm thick. And all of those are very thin computers.

Like the Mac, this is a notebook and nothing but a notebook. The screen doesn’t detach, or fold back, and it is not touch sensitive. It offers a full HD resolution in a 16:9 aspect, with the display pushed up towards the top of the lid, leaving room only for the webcam. HP describes the display as UWVA, for ultra wide viewing angle. It is LED lit. The extreme thinness of the screen, and touch of light breakthrough around the edges when a mostly black screen is being displayed suggests that it’s edge lit. The webcam is HP’s TrueVision HD Camera (apparently 720p) with dual array microphone.

The speakers are hidden under a rectangle of perforations on each side of the keyboard. The audio is Bang & Olufsen branded, which means that it sounds pretty much like tiny speakers in a notebook computer usually do, although the character of the sound was less rattly than the norm, merely tinny.

Apart from the usual 3.5mm combo headphone and microphone socket, all connections – including power – are via USB Type-C sockets. Unlike some ultra slim computers, there are three of them so there are reasonable expansion possibilities. I nonetheless used an $80 USB Type-C expansion box, with Ethernet and three USB 3.0 sockets to provide support for my legacy gear, and take advantage of gigabit Ethernet for file transfers.

There’s more to two of these USB Type-C connectors than usual: Thunderbolt 3 compatibility. The two standards are being merged, with USB Type-C becoming the connection standard. All three support USB 3.1 and all three support powering or charging external devices while the computer is off. The computer can be charged using any of the three ports.

A short USB Type-C to USB Type-B cable is included to provide some out of the box compatibility with peripherals, but until Type-C takes over the world (as it’s certain to do within the next couple of years), you will probably still need a breakout box. I used it extensively with a digital to analogue converter to achieve high quality sound.

WiFi ran as fast as my router would support with 802.11 wireless capability. It also supports WiDi, and it happily fed its full HD display to my UHD Blu-ray player for display on an attached semi-smart TV. Well, as happily as ever happens in my office, which means after a few false connections.

There are four Li-Ion cells scattered around the computer’s interior, necessary for best space utilisation, with a capacity of up to 38 watt-hours. HP bravely specifies up to nine hours of battery life, with a suitable disclaimer making it clear that the actual running time could be anything.

The higher level model packs a Core i7-6500U, 512GB SSD model for $3099. According to an online benchmarking site, this i7 CPU gives about a 7.5% performance boost over the i5 employed by the review unit. As far as I could tell, you can’t option up the i5 model with a bigger SSD, so if you need the space you’re going to be buying the modest i7 performance boost as well.

HP also sells a nice leather sleeve of just the right size, and a wireless mouse with a matching colour scheme.

Size and power definitely aren’t related. The HP Spectre 13 performs, well, about as well as any other 2-core, 4 thread Core i5 of its speed and generation. In other words, as well as many other modern, powerful, notebook computers. It was fast, and this was demonstrated most obviously in rebooting, getting back to the lock screen in less than 14 seconds. My Surface Pro 4 with the Core M3 processor takes 36 seconds for the same process.

Once you get to the lock screen, there’s no assistance from Windows Hello. The Spectre isn’t compatible. You’ll have to enter a password or set up a PIN.

Yet despite the power it’s a featherweight. It’s the sort of thing that you can pick up from the desk, while the screen is open, with just a light grip on a corner and not fear it falling from your grasp.

Now I was expecting that being so lightly built the keyboard might be inadequate, with insufficient travel and too much flexing of its base. But that turned out to be quite wrong. It was for the most part a pleasure to type on. The body of the notebook remained unmoved as I pounded like a literate Neanderthal, while the keys registered cleanly, and reasonably pleasingly to my fingers. The keys themselves have an island style, and I suspect helps accuracy, or at least makes it easier to feel if you’ve missed.

That said, I had a little trouble adapting to the secondary key arrangement – you know, those keys accessed by holding down the “Fn” key which appears on otherwise truncated keyboards. The layout was quite sensible, but a little different to the one I’m used to, and those functions were described on the relevant keys in very small lettering that was nicely colour matched to the overall look of the computer. That is, the text was in a gold/bronze which turns out to be surprisingly difficult to make out on the dark surface of the keys, especially in a darkish environment. The keyboard isn’t backlit.

That said, if you buy one of these, within a few days your motor cortex functions will have remapped themselves and you won’t have to do any peering at the keys. One nice touch is that there is a tiny LED on the mute key, illuminated when it is in operation. Ever started a Youtube video and been puzzled why there’s no sound? I do that all the time. This light will likely solve the issue for you.

I loved the screen. Some displays offer more pixels in this size – the Mac Retina ones for example. But in practice that additional resolution is not going to be visible over the 1080p on offer here. UVWA – ultra wide viewing angle – display is the claim. I could not disagree. Any angle you look from the colour remains bright and bold, even if the angle is so extreme you cannot read anything and only barely make out pictures due to the extreme trapezoid distortion angled viewing always produces. I mentioned above a little light breakthrough on a mostly black screen. That was in a fairly dark room. In normal lighting conditions, there was no such thing. The black levels of the display were actually quite impressive.

Outdoors, well it’s like most notebook displays. If the sun’s out, find shade and try to orientate the notebook so that that nothing bright is being reflected back at you. Do that and the display was clear and bright enough to allow you to be productive. The circular hinges holding the screen achieve that nice balance of being firm enough to hold the display securely at any permissible angle – up to 120 degrees I’d guess – while being soft enough to allow you open up the screen from closed with one hand.

A nine hour battery life? I actually got eleven hours and twenty minutes before the battery hit 5% and the computer switched off. But that was with the computer doing nothing but displaying the desktop and the expanded information on the battery from the status bar. While running on battery the screen defaults to seventy per cent brightness.

At the other extreme, I looped a 4K video in VLC and the computer switched off at around ten percent remaining battery after one hour and 53 minutes. On that one the fan was running pretty furiously the whole time. The desktop/do-nothing test was completely quiet.

Successfully competing with the various Macs on battery life is something to which Windows apparently doesn’t lend itself. These days Apple’s claiming a dozen hours of battery life for the MacBook Air, something it comes very close to actually achieving. So when you’re showing off your HP Spectre 13, you might want to just glide over battery life which, let’s face it, would be pretty impressive in any other context.

As for me, I can’t think of a better Windows notebook on the market.

NOTE: This review was originally published as a review of the Hewlett Packard Spectre 13, but I’ve been advised:

Since the split with Hewlett Packard Enterprise, HP is now only known as HP or HP Inc – and the Spectre is referred to as the “HP Spectre 13”.