Review: House of Marley Get Together Mini Bluetooth speaker 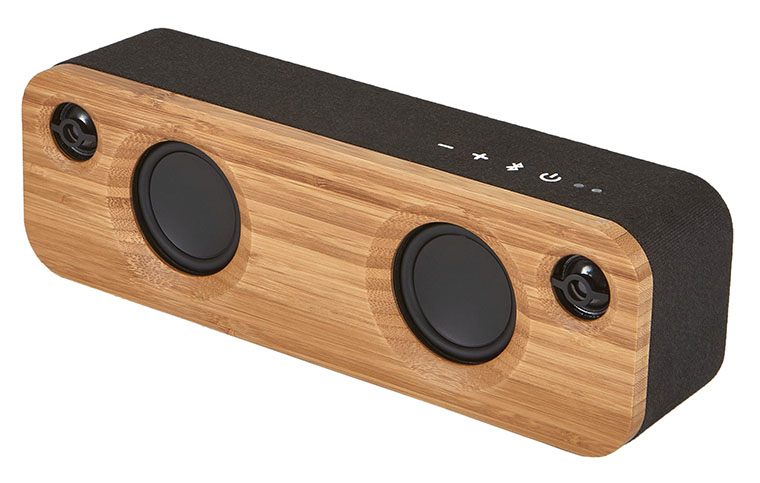 A couple of weeks ago I mentioned an interesting looking portable Bluetooth speaker, the $199.95 Get Together Mini from House of Marley, a firm with links (licensing ones at least) to the famed reggae innovator Bob Marley. Now I’ve got my hands on one and it’s time to dive into it.

The Get Together Mini is, well, the Mini version of the Get Together speaker. It isn’t tiny, but smallish. It measures 300mm wide, 95mm tall and 75mm deep and weighs just over 1.5 kilograms.

Part of that surprising weight is due to the built-in lithium ion batteries. It really is portable, able to play anywhere it’s in wireless range of your device for, the House of Markley (hereinafter called HoM) says for up to ten hours. It is powered via a MicroUSB B socket and can be fed from any USB socket able to provide reasonable power. It comes with a universal USB power adaptor and cable, just in case.

What’s particularly cool about the Get Together Mini speaker is the styling. It has a bamboo front, and a bamboo panel on the back while the rest of the body is tightly covered by a “Rewind Fabric” which is apparently made from recycled materials. The four control buttons are boldly marked out on the black cloth in white. The connections – power, 3.5mm auxiliary in and regular USB – are on the back. The normal USB socket is for providing power to your portable device. This will of course reduce the unit’s battery life if that’s how it’s running, but it means that both source and speakers will have power.

In my earlier report I was misled with regard to the lineup of drivers. There are two 25mm tweeters, not 38mm full range drivers. There are two 63mm woofers, not passive radiators. There is a passive radiator – a loudspeaker technology which is usually a woofer which isn’t electrically connected, but is weighted so that it resonates in a way which boosts the bass the normal speakers can’t properly deliver. In this case, it is that bamboo panel on the back. As the speaker’s playing it vibrates quite a bit.

I did find that its placement resulted in me often pressing into it when picking up the speaker. It seemed strong enough to take it, but I’d try to avoid it where possible.

HoM does say that the Get Together Mini speaker uses Bluetooth 4.1 and A2DP audio, but doesn’t specify the codecs used to actually convey the music. A2DP is a Bluetooth profile which is necessary for decent stereo audio and can carry it using the SBC codec, which is regarded as the lowest quality of the options available. Some speakers also support AAC (which provides better sound quality with Apple devices) or aptX (better for some premium Android devices), but in the absence of these being clearly specified, it’s best to assume that they aren’t implemented.

A remark on the user manual is in order. Occasionally you see a product with a manual that is elegantly designed and easy for any user to follow. The “manual” packaged with this speaker is the complete opposite of that. It is one flimsy piece of paper folded into 14 panels per side. In addition to instructions, it covers the voluminous regulatory information (for example, the speaker is compliant with the limits of a Class B device! Pursuant to Part 15 of the FCC Rules!) in 21 languages, plus warranty info (we get two years in Australia, explained in excruciating detail over two and half panels).

My problem isn’t all that stuff, which is no doubt legally required. It’s that the actual user instructions consist of infographics occupying the equivalent of one panel, and half of those were instructions not to open the casing or dump it in water.

I puzzled out the remaining instructions with a bit of trial and error. Alternatively you can go to “thehouseofmarley” website, either local or the home site, and find the manual for the bigger, non-Mini “Get Together” speaker, which is somewhat clearer and uses, you know, words.

It turned out that the Get Together Mini speaker is actually quite easy to operate, once you puzzle things out with little help from the instructions. There are two lights on top. The right hand one shows red when the unit is charging. The one to the left lights when the unit is switched on. You hold down the power button for three seconds to switch it on or off.

When you first switch on the power, the blue light flashes slowly indicating that it’s ready for pairing. Once paired it goes a steady blue. To pair a different device you hold down the Bluetooth button for a couple of seconds and then release it. The blue light starts flashing slowly again.

You can have several devices paired with the speaker at once. You can switch devices by choosing the speaker using a different paired device than the one currently playing, and it takes over from the other device (which may well continue to play through its own internal speaker, depending on its design). I can foresee the battle of the teens being played out on the Get Together Mini Bluetooth speaker. Frequently. Normally it works the other way around: the device currently connected to the speaker has to surrender control before a different one can be connected.

When you plug something into the 3.5mm auxiliary input, the speaker switches automatically to it and the blue light on top switches to red. Then it’s just a matter of playing the plugged-in device and adjusting volume to taste. Pull the plug and the light goes blue and your Bluetooth music can emerge.

The first impression of the sound of the Get Together Mini speaker wasn’t great. A female voice announces the speaker’s status when pairing and disconnecting via Bluetooth, or plugging in or disconnecting power, and there was a very lumpy boom in the lower registers of the voice. Happily, most of this seemed to be due to the recording of this particular voice.

I was pretty impressed with the sound quality of the Get Together Mini speaker on music. It delivered reasonably room-filling sound with clarity and coherence and musicality, both when running on power and on the battery. The midrange is a touch back in the mix, while the treble from the tweeters is clean and precise, giving a nice airy quality to the sound, but with a fair bit of bite when required. The upper bass and higher regions of the mid bass were presented just a little emphasised in the mix.

I gave it a fair work out on mostly up tempo material – The B-52s, Cake and of course Bob Marley himself (the compilation album Legend). Good delivery on all, with a surprisingly strong delivery of the bass line on such tracks as ‘”I Will Survive” (on Cake’s “Fashion Nugget”) and Marley’s “Is This Love”.

On this last, with the level up rather high, the bamboo panel on the passive radiator was jumping visibly as it followed the rhythm section, and when I put my hand near it I could feel the pressure wave it was generating.

Okay, the bass tended to have clear distortion components, but that didn’t really detract from the overall enjoyment of the music, tending just to give it a bit of bite. Things got harsh as I pushed the volume, but it kept on going. Too many devices top out for reasons of “safety”. None of that here.

The Get Together Mini is supposed to have a hands-free function, but I could not work out how to use it. When the speaker paired to my phone, it was only as a media player, not as handsfree phone device. When I called my phone (the last remaining use of a landline!) the music muted on the speaker, but all interactions were via the phone. If the microphone in the speaker was picking me up I couldn’t hear it, even when shouting at it. The voice was coming out of the phone only.

If none of the paired devices is actually connected to the speaker and no auxiliary device is plugged in, the speaker powers itself off after two minutes.

I checked battery life by turning up the Get Together Mini speaker to a somewhat more than comfortable level, put it in a different room and let my phone play a series of tracks. For six hours and twenty minutes. That’s how long it played for before unceremoniously switching itself off. For the last half hour or more the red charge light flashed to indicate a low battery condition.

No, that’s not ten hours. But you can be sure that no battery powered Bluetooth speaker is specified for battery life when running at this high a volume level. I wouldn’t not be surprised if it approached ten hours at a low level.

The Get Together Mini Bluetooth speaker is a fine performer and a good looker. If you’re after a similar device in the $200 price category, go and have a listen to one. The sound and looks will likely persuade you to adopt it.

Overall
Features
Value for money
Performance
Ease of Use
Design
Reader Rating13 Votes
Good loud sound; good battery life; strong bass for size, nice styling
Paired devices can take over from each other, rather than currently connecting one having to surrender control; lousy manual
4.4