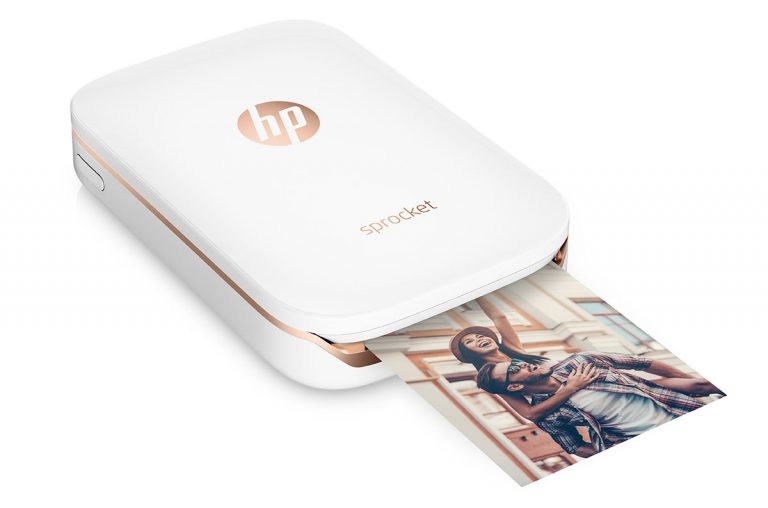 This, truly, is fun. The HP Sprocket is a photo printer, but not for professional purposes. It’s for getting photos off your phone – Android v.4.4 or later, iOS 8 or later – and onto photo paper. Small bits of photo paper.

Let’s be clear. The HP Sprocket is fun, a lot of fun, and it’s only for fun. You want professional photo prints? Go to a print shop or buy a different device. What the Sprocket produces are small, fun prints, generally on adhesive paper with a removable backing so you can stick them onto things.

The sizes of the prints are 50mm by 76mm, or just under two inches by three inches. Two by three? Yes, that makes each print one quarter of the size of the tradition six by four.

The printer uses Zink photo paper. Zink is the brand, and it also stands for “zero ink”. It’s a kind of multilayer thermal paper, with the yellow, magenta and cyan dyes triggered by specific heat pulses to produce the colour, as is the sealing coat. You probably won’t be surprised to read that the technology was first developed by Polaroid – famed for instant print cameras back in the day. Subsequently the company was turned into an independent business.

Tectogizmo has a good overview of Zink paper herer. here.

The advantage of this is no fiddling around with bits and pieces. Everything is in the paper. No inks or other consumables needed.

The HP Sprocket printer, as you’d expect with a fun device, comes in three colours. The review one was a lovely iridescent red, but black and white (this last with gold-coloured highlights) are also available. It measures 116mm long by 75mm wide and 23mm thick. (It’s eminently portable, too, weighing just 172 grams.) It has a built in rechargeable battery – it’s a 7.4 volt, 500mAh Lithium Polymer unit – which you feed from any standard USB charging device via a Micro-B USB socket on the back. There’s a power button and a power LED (charging takes less than two hours) and a white LED to indicate status, and that’s about it for on-device interactions.

It’s the app that does everything else.

The printer supports JPG, GIF, BMP and PNG photos, and also TIFF when used with the iOS app. The Bluetooth is version 3.0. It contains 512MB of memory. The print resolution is 313 by 400 dots per inch. That tends to understate the resolution because with this kind of technology the three colours overlay each other, rather than sit side by side, so it’s more comparable to something like a thousand dots per inch from an inkjet or laser printer.

Your first step is to install the “sprocket” app. I used Android, but it’s pretty much the same for iOS. The app talks you through connecting to the Sprocket.

If your phone has NFC then you can tap and apparently this will trigger the app download, but I didn’t realise this until later. When I reset the Sprocket and tried NFC – I already had the app installed – and the NFC of the phone certainly responded to the Sprocket, but rather than opening up the Sprocket app or taking me to the HP web page, it just started up the Fitbit app on my phone each time. So I just ended up re-pairing manually.

Really, I think that most of the time using NFC for Bluetooth pairing is more trouble than it’s worth.

The app also manages firmware, and did indeed update the Sprocket’s firmware with the latest version.

Apart from that, after you’ve tapped on the appropriate permissions it scans all available photos on the device and presents them for printing. “Sprocket” also comes up as a sharing option when you’re in your regular photo display app. If you share from that, the Sprocket app opens up with the relevant photo displayed, ready for printing.

Beyond that, it’s just a matter of tapping and then waiting thirty seconds for the print to appear.

Of course, before that you will have loaded the paper. That’s done ten sheets at a time. Even larger capacity packs of paper still have them bundled in lots of ten, each lot in metallised plastic satchel (presumably to keep them dry). A blue sheet of cardboard with a two-way bar code printed on it is included with each bundle of paper and is placed into the tray with the regular ten sheets. The printer reads this to identify the paper. HP doesn’t go into the reason for this, but I expect it’s to make sure the printer uses the right settings for any differences in paper types. Getting those pulses just right must be important to the final job.

This also is used to clean the printer. It emerges from the printer ahead of the first print from each packet.

The prints roll out through a slot on the end of the Sprocket, finished, with no additional waiting. For a typical photo it took about 42 seconds for the app to send the data to the printer and complete the print.

The paper has the feel of standard snapshot paper and the prints come out with a nice, glossy finish. If you try really, really hard you can barely spot some slight streaking by catching the light at a certain angle. But with normal viewing, that’s not at all apparent.

They print fully from edge to edge. Before being sent to the printer, the app crops the edges to the right aspect ratio. You can further edit size, but not shape. The aspect ratio is fixed. Scissors are the solution if you need a different shape.

The colour was interesting. The pictures came out with a slightly older look, like 1960s family colour photos. They could look a little washed out compared to the bold colours on a typical mobile phone screen, but again we’re talking about fun here rather than a professional photography tool. They are colourful and by default have a slightly retro look that somehow seems fitting on prints of this size. Because the prints are made from C, M and Y dyes, black is made by an intense mixture of all three. It tends to come out as a very, very dark brown rather than full black.

You can fiddle with colour and brightness and all that stuff in the app if you like. But I liked it the way it was.

The prints are colourfast against modest applications of water, but not against a drop of whisky that managed land on one and dry overnight. When I tried cleaning it off the next morning, one or more layers of print came off with it, exposing a blue substrate. I’d like to say that I discovered this through commitment to my reviewing, but it was of course an accident.

If you’re after a not inexpensive stocking filler for someone that you love, the HP Sprocket would certainly fit the bill. I’d suggest tossing in a few additional packets of paper as well.

Features
Value for money
Performance
Ease of Use
Design
Reader Rating2 Votes
Fun and easy to use, prints double as stickers
Expensive paper
3.5