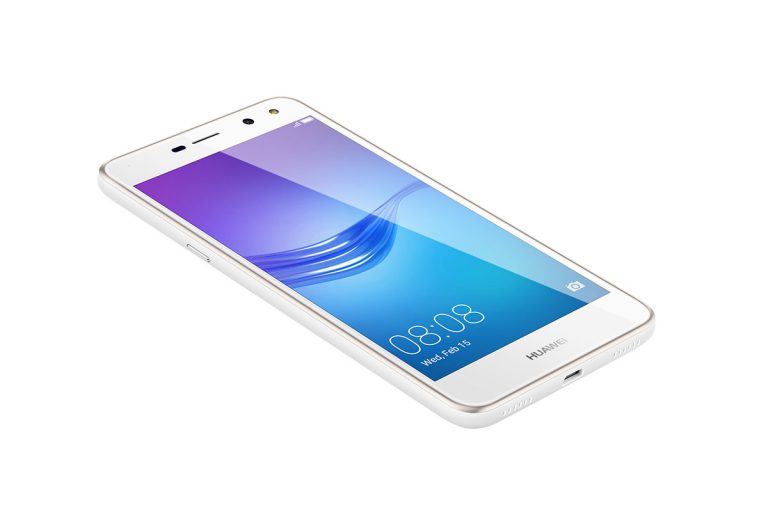 Let’s say you fall on hard times and even though you’d really like one of those Huawei P10 phones with their award winning Leica cameras and what not … $200 is the most money you can pull together. As it happens, Huawei’s Y5 2017 costs just $199. Let’s see what you get at very close to the entry level.

This is a fairly a lightweight phone. From the front the phone looks quite conventional. However, it feels a bit more plastic around the back because it is removable. Still, it’s textured and neat looking, and is also white. The plastic doesn’t buckle or bend under moderate pressure because it’s supported by a metal chassis underneath.

The phone weighs 147 grams and is 8.35mm thick. The camera bump is about the thickness of a piece of paper.

It has a 5 inch display with a 720 by 1280 pixel resolution. Respectable, and quite sharp enough for a display that size. (For comparison, the standard thousand dollar plus model by a certain well known phone maker has a six per cent smaller display with less than five per cent higher resolution, and it’s pretty well regarded.)

It comes with 16GB of storage. With only a few photos and a light load of apps there was 6.4GB left over. But there’s a slot for a microSD card – Huawei says capacities of up to 128GB are supported, and I successfully used a 64GB one.

You pop in the microSD card by removing the back. It comes off fairly easily without any fingernail damage, but seems to hold securely when in place. Also back there are slots for two SIMs, not just the one advertised. One is the regular Nano SIM we use these days. Huawei tells me that the larger Micro SIM slot supports only 2G networks which are no longer available in Australia. And that’s why it’s being sold as a single SIM phone.

The phone is charged and offers connectivity via a Micro-B USB socket. This does not support OTG. I tried both a keyboard/mouse and a combo memory stick with no luck.

It has WiFi of course up to 802.11n, 2.4GHz only, and Bluetooth 4.0. It does not include Miracast so there’s no native screen mirroring. But if you have a Chromecast device, or your TV supports Chromecast, it works fine with that. You’ll have to install the Google Home app for mirroring, but apps which already support Chromecast worked nicely. As I write this I have a Youtube video being cast to a Chromecast Ultra plugged into my home theatre system. No difference at all between this phone and my Samsung.

Out and about, the phone supports 4G networks for decent performance. Google maps downloaded swiftly, and Spotify music streamed smoothly.

Security is provided in the old fashioned ways of PIN, password or pattern. There’s no fingerprint scanner.

The rear camera is an 8 mepapixel f/2.0 unit and is capable of recording video in 720p and 1080p. The front camera is five megapixels.

There’s no NFC on this phone, so no tapping to transfer content from an old phone. But Google’s “Set up new device” not only transferred my Google credentials, but the phone downloaded and installed several of my apps automatically. Not all of them. I’m unsure why it picked the dozen or so that it did. As far as I could work out, the others were compatible.

The interface worked in Huawei’s standard way, which generally isn’t too different to Google’s. Changes you’ll get used to quickly enough. When I tried holding a black space in the home screen to bring up the widgets, the phone told me I needed to pinch the screen instead.

And, of course, I rechecked that just after typing it out, and weirdly, when I held the screen it brought up the widget editor. After a reboot there was no change.  Weird.

Furthermore, a few days ago I wrote this sentence: As usual with Huawei phones, if you swipe to the right from the home screen, there’s another blank page to the left, so you can have two pages of apps just one swipe away from the home page. And now I find that this feature has gone too.

I imagine I’ve changed some setting that made the changes. Although I can’t find where it is. How it works for you? I can’t say.

I will note that in my search for settings I found one that allows the home pages to rotate both ways continually. In other words, you can swipe from the last one to the first one, and that’s even better. I also found a way to switch the Google-default return and apps buttons to the Samsung style, with return on the right.

By default, the notifications page stands alone when you swipe down and you have to hit a shortcut tab to get to those (unless there are no notifications, in which case you go straight to shortcuts). But there’s a setting that allows you to swipe down from the top left for notifications, and top right for shortcuts.

The Easy Key didn’t seem to do anything by default. You can assign it to three different functions (for press, double press, press and hold). Initially I had a single press wake the camera up ready to take a photo, but after I kept on hitting it with my finger when extracting the phone from my pocket, I disabled the single press shortcut and made the camera a double press. That proved to be very convenient.

I have a strong suspicion that Huawei’s engineers have truly excellent eyesight. As I’ve noticed with other models from Huawei, the auto screen brightness veers towards the dim. Very dim. I switched off the auto setting because it became impractical, and accepted the shorter battery life likely to ensue.

Speaking of which, the life from the 3000mAh battery was good, with no trouble at all with lasting for 24 hours.

The camera was easy to use. There’s nothing fancy like RAW, and the photos were inevitably somewhat softer, due at least in part to the lower sensor resolution. Nonetheless, the photos it produced were generally usable for utilitarian purposes (that is, identifying things and so on), even in quite low light.

There’s a Panoroma mode that covers a 180 degree rotation. The stitching was a bit weak in a couple of places

The camera can use the microSD card to store photos and video, including full HD video. I’d suggest making use of this facility given the modest amount of built in memory. I used a fairly fast card, and there were no problems with recording even full HD video to the card.

There’s a Beauty mode for taking selfies, along with a kind of hyper Beauty mode called Perfect Selfie. With this one you set it up by taking front, side, the other side, and looking down shots so it can analyse you. And then you can use sliders to brighten or increase the size of your eyes, increase the smoothness of your skin, make your face thinner and (controversially, perhaps) make your face whiter. You can change the settings later, but they apply to Beauty shots thereafter. There’s a slider presented whenever you’d going to use Beauty, with eleven settings from nothing to full bore.

Truth is, the camera was actually quite a bit better than I expected at this price point.

As for raw, measured performance … well, this isn’t the phone if you want to play graphics intensive games or solve intractable mathematical problems. It scored 795 on the Basemark OS II benchmark, compared to 943 for the rather more expensive Oppo A57 I looked at a while back, and around 3500 for premium phones. On games, the weakest performer on the Basemark OS X benchmark which I’ve seen lately has been the Oppo A77, reviewed the other day. It scored, 12955. The Y5 manages a mere 8113. Premium phones? Around 44000!

But, you know: two hundred dollars. If I wasn’t in this line of work I think I could live with the Huawei Y5 2017 smart phone. Although I’d still lust after more expensive ones.

Overall
Features
Value for money
Performance
Ease of Use
Design
Reader Rating0 Votes
Very low cost, adequate all round performance, camera better than it should be for this price, expandable memory
No OTG or Miracast, not suitable for games, auto screen setting too dim
4.1