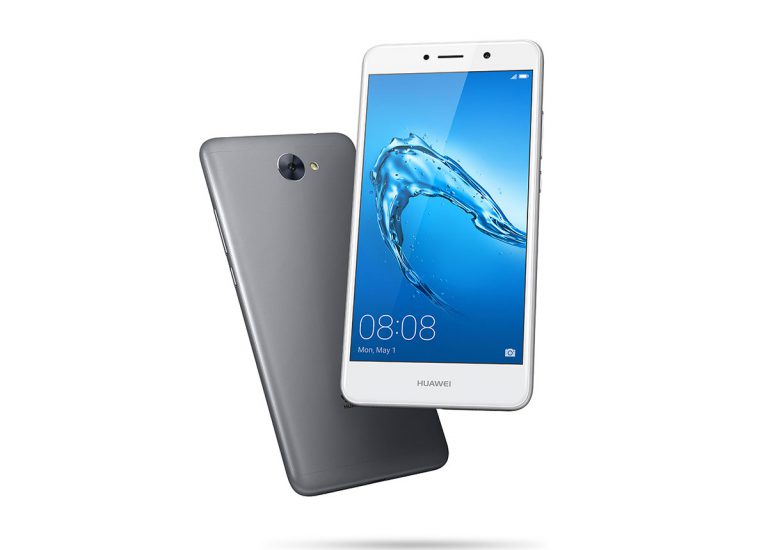 Huawei released two budget phones recently. We reviewed the $199 Huawei Y5 2017 here, and now we’re diving into the $299 Huawei Y7. Apparently this is the first Y7, so it doesn’t need the year tag in the model name.

More realistically, what you get is a phone that looks a lot more like a mid-level, even premium-level, model than the Y5. It has a metal back and 2.5D glass on the front. That means it curves smoothly at the edges for mounting into the bezel without a lip around it. There is no mention of the type of glass used. It comes with a screen protector already attached. I left it in place during this review.

The phone looks great. There is a rear camera bump, but it’s only a half a millimetre or so. There are two speakers on the bottom end, either side of the of the Micro-B USB socket. It’s available in Grey, Prestige Gold, and Silver.

There’s a 3.5mm headphone socket on the top and volume and power keys on the right. Unlike the Y5, there’s no assignable “Easy Key”. There is a proper tray for the SIMs and memory card

The soft return key is to the left at the bottom of the screen, apps to the right. Likewise, the home button is on screen, rather than physical, and there’s no fingerprint scanner. It’s this omission that more than anything sets this camera into the budget category.

Well, one other thing perhaps. The phone sports only 16GB of storage, of which less than 10GB is left over for the user after OS requirements. Fortunately, the phone can support a microSD card of up to 128GB.

It also supports two SIMs, but you’ll have to leave out the second one if you want to use the memory card. But since only 3G is supported on the second SIM, you may not be bursting to use it. (Nice, though, to have the option.)

The phone runs an MSM8940 octa-core processor with four 1.4GHz and four 1.1GHz cores. It has 2GB of RAM. It is loaded with Android Nougat 7.0 and runs Huawei’s EMUI5.1 interface (both of those are a version up from what’s in the Y5).

The standard LTE bands are supported when you’re out and about. Locally the WiFi is single band, with up to the 802.11n standard, while Bluetooth is version 4.1.

I expected a bunch of general commonalities between the Y7 and the Y5 2017, which I reviewed recently. Same manufacturer. Same launch date, surely the same, but better given the Y5 is $199 and the Y7 is $299.

And of course, the Y7 is indeed better in most ways. But also different in the ways that you might expect a different brand of phone to be different. Consider initial setup for example. The Y5 offered “Set up new device”. Like the Y5, the Y7 doesn’t have NFC so there could be no tapping. But neither did it offer that option, so instead of transferring Google credentials over automatically, I had to type them in. A small thing, but quite different.

That done, it then offered to install my apps as identified by Google, something the Y5 didn’t do. It instead just up and installed a small, seemingly random selection of them. The Y7 gave me option to choose which ones, which I did (a bunch of them are Samsung apps which have no place on a Huawei phone).

The screen looked good. I assumed for most of the review period that it was full HD. It was only when I came to do the formal review and looked it up that I found it was 720 by 1280. Even then I took a screen shot and checked out its resolution to confirm. I don’t think many will find the resolution to be insufficient.

It was also nicely bright. The auto brightness setting was much more practical than that of the Y5, and when I was taking photos outdoors, framing shots was easy because of the clarity of the screen.

The implementation of Android 7.0 was fairly standard, apart from apps not defaulting to a separate apps tray. As you install them, they are put on standard pages.

You can edit the short cuts bar and the shortcuts page revealed by the second swipe. Hotspot and screen mirroring shortcuts are available there. Notifications work in the usual way.

As we’ll see, the processor isn’t going to win speed and power awards, but in regular use you wouldn’t know that. Everything worked swiftly and smoothly. All apps worked perfectly well.

Initially I thought that the phone didn’t support OTG – On the Go – USB connections. My memory stick didn’t work and neither did the wireless Logitech keyboard/mouse I normally use for this purpose. Then for no good reason I tried a different keyboard and it started working. I switched back to the first keyboard and now it worked perfectly. I plugged in a USB DAC and played music. I plugged in the original memory stick, and now it worked. Perhaps the phone needed to download some driver or otherwise install it.

The phone also did a fine job screen mirroring to a Microsoft Wireless Display Adaptor plugged into a TV, and to a smart LG TV. The phone also worked well as a WiFi hot spot.

The battery lasted quite a long time. While I wasn’t using it much as a phone, it ran for three days before getting to fifty per cent remaining. I do like a big battery.

The camera doesn’t have a RAW mode, but does have a “Pro” mode which allows you to adjust settings. Amongst the settings are choices on where to save your photos. You can set it to the microSD card, which is useful given the small native storage. Bursts are always saved to the phone (I guess they can’t trust that you’ll put in a fast enough memory card.

There’s also a setting to use a double tap on the volume down key to fast start the camera.

The picture quality was surprisingly respectable. Initially I thought the pictures looked a bit soft compared to the Samsung Galaxy S7, but I came to realise that it was mostly a difference in the amount sharpness post processing applied to the images. You can always do that later in software if you want.

In darker circumstances, it wasn’t as good at focusing, and while it has a HDR mode, that’s manual and so less convenient. It tended to leave those kinds of shots darker overall. The only really disappointing photo was the colour of the red flowers of a quince plant in bloom. They ended up a deep pink rather than their actual deep red.

Incidentally, the camera reports that it has a maximum aperture of f/2.2.

The phone does Panoramas in the usual way. It covers 180 degrees, left to right only, and the stitching was fairly respectable, with only some wonkiness on phone lines against the sky.

If you can live without the fingerprint unlock, at $299 it’s a bargain.