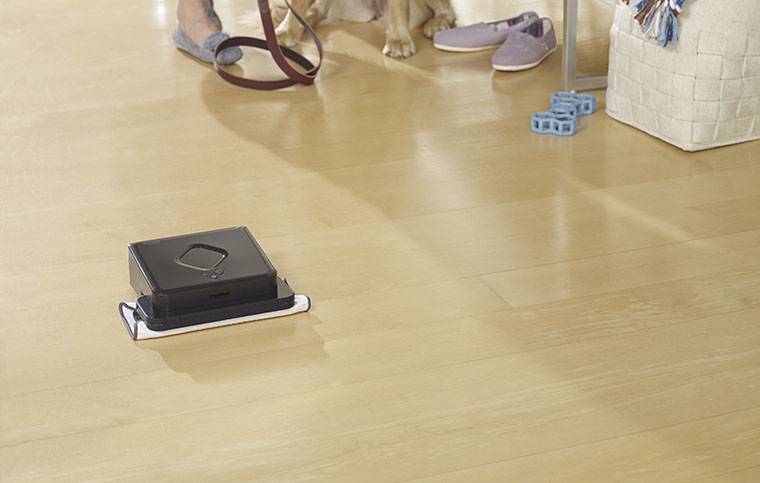 A couple of weeks ago we had a look at the famous Roomba, the robotic vacuum cleaner from iRobot. It turns out that its producer, iRobot, also has a Roomba-like floor sweeper and mop, called the Braava.

The model I got to play with was the top of the line one, the iRobot Braava 380t. The terminating “t” stands for “turbo”, which is nothing to do with its performance, but marks the inclusion of a charging cradle which reduces the charging time from four hours to a couple of hours.

The Braava is a low-slung squarish unit, with a wide front where the mop or broom is attached. This has bumpers on the front and sides so the unit knows it has reached an obstacle to navigate. But it knows where it is chiefly by means of the included “NorthStar Navigation Cube”, a small battery operated (two C cells) device which reflects a signal off the ceiling which the Braava can use to determine its position. You can purchase additional cubes to increase the Braava’s coverage, however this is principally useful for the sweeping function since the mopping function is likely limited to the capacity of its water and detergent reservoir.

The manual says that the mopping function is good for 32 square metres, which means nothing to me because I don’t think in square measures. Taking the square root, that comes to a space 5.6 by 5.6 metres. Or a weird room that’s 4 by 8 metres. Chances are, that will cover a decent-sized family room.

For both sweeping and function you can use disposable cloths, or reusable microfiber ones. For mopping, you must use a microfibre cloth. One reusable for each of sweeping and mopping was included.

On the top of the unit are three buttons: power, sweep and mop. And a detector for the Navigation Cube’s signals. At the bottom are the two largish wheels which drive the unit. At the front the pads for the sweeping cloth and the mopping cloth slip into the body, drawn in by magnets. No difficult clicking and yanking involved here.

The pad for the dry sweeping cloth has some slots to push the cloth into. This looked precarious, but actually held the cloth quite firmly. The mop pad (“Pro-Clean Reservoir Pad”) has a reservoir for a small amount of water. The wet cloth wraps around that and is held in place with Velcro. The capacity of this didn’t seem very large, perhaps a cup full. iRobot seems to suggest that you only use water in the reservoir, not detergent.

So, there are two functions. The first – sweeping – was somewhat limited. When you or I sweep, we usually sweep from all areas to one central point at which all the dust and debris can be piled up, to be then swept into a dust pan for disposal. The Braava followed a pattern running parallel paths which gave complete coverage, but could do nothing except push the debris in front of it, except for the modest amount caught in the pad. When the build-up got to certain level, it started being left behind when the Braava turned.

To be fair, this was on a floor that was overdue for a thorough sweep. There was simply too much for it to manage. That said, the Braava could run up to four hours in sweeping mode (that’s how long the battery will last).

My approach to mopping is also very different to what the Braava does. I splash heavily soaped water around liberally, wait so it has a chance to soak in, then mop it all back up again, scrubbing where necessary. The Braava adopts this approach in a small way, not waiting long, and not using soap, but allowing some soaking. It has the nice feature of running along the walls at the end to make sure it has achieved full coverage.

Again there are limitations. Any dripped food which had been there long enough to set remained unmoved by the passage of the Braava. Its forte was touching up a fairly clean floor, and keeping it clean.

Will the iRobot Braava 380t do what you want it to? That depends on your wants. If you want it to take floors with dried-on goop and piles of dust and dirt and make them pristine, you’ll be disappointed. But if you want easy maintenance of basically clean floors, then the Braava 380t will save you a lot of time.

Features
7
Value for money
7
Performance
7
Ease of Use
8.1
Design
8
Positives
Excellent for maintenance of cleanliness, good value for money, easy to use
Negatives
Not suitable for really dirty floors, doesn’t auto-dock like the Roomba
7.4

Dreame Bot L10 Pro – the robots are getting smarter, much smarter (review)