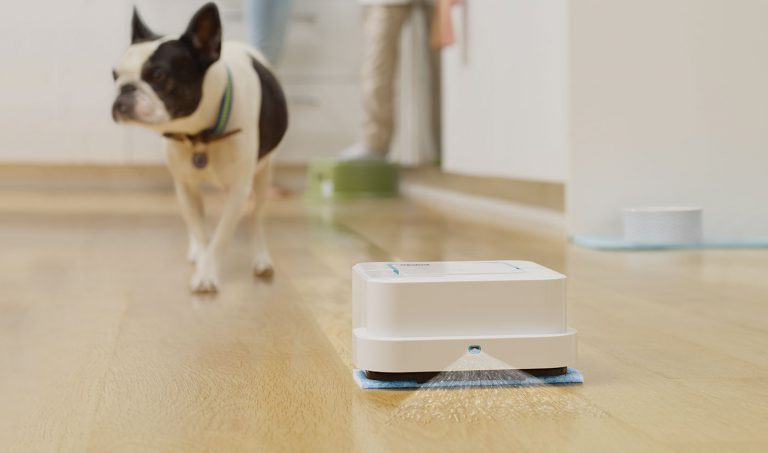 iRobot Braava Jet 240 Mopping Robot is one of its lower cost models but it has more advanced features than most.

We’ve been looking at iRobot in its various manifestations for over a decade. Most recently we reviewed the current Roomba 980 model. But since the Roomba first appeared, iRobot has produced wet cleaning devices as well and introduced the Braava range of floor mopping robots. The current top of the range is the $599 Braava 380t, which we reviewed here.

That equates to a decent sized room: five by five metres, and four by five metres, respectively. For larger areas, the Braava 300 series might be a better choice. iRobot recommends the Braava Jet 240 more for kitchens and bathrooms.

The Braava Jet 240 is a smallish device. It basically occupies a square of about 180mm on a side and stands 84mm tall. The front section is connected to the bulk of the body by springs, so that it can move when pressed against objects. That’s how it knows to stop, back up, change direction and so forth.

Attached to the underside of this front section are slots to hold the cleaning pads. There are three different kinds for the three modes. Each is 178mm wide by 68mm deep. Also in the front section is a nozzle for spraying water out ahead of the cleaner. That’s how it gets the water down. Unlike the bigger model, it doesn’t wick the water down through the pad itself. The pad is there to soak up the water and wipe up the dirt directly from the floor.

At the two bottom corners of the front section are also sensors which monitor floor level. If it falls away – stairs or something – then the Braava will know about it and treat that as a barrier.

At the back is fold up carry handle, underneath which resides a rubber cap for the water tank and the release for the pads. Underneath that section are the two drive wheels. They are independently driven, thereby giving the unit the ability to steer itself. There is no wheel at the front, which is held up by the cleaning pad.

The rechargeable Lithium Ion battery is a 3.6 volt, 1950mAh unit. It clips into a bay at the back of the Braava. It was easy to insert and remove. The unit comes with a battery charger with a similar bay. iRobot says that the battery takes two hours to charge. That seemed about right, or perhaps even over conservative. The first time was quicker – less than a hundred minutes – and that might have been due to it having retained a partial charge from a previous use. But throughout recharges were completed more quickly than I anticipated.

The device is supplied with six pads, two each for dry sweeping, damp sweeping and mopping. New ones are available for $24.95 for a two pack of each variety. Alternatively, you can by a set of two washable wet mopping pads for $49.95, or a three pack of a dry, damp and wet pad, all of them washable, for $59.95.

It’s kind of fun watching the Braava Jet 240 poke its way this way and that around the room. I started with a dry sweep in my kitchen – it has large, shiny ceramic tiles on the floor, and lots of bumps and crevices down the sides of the room. You slide the relevant pad onto the bottom – it slides smoothly and clicks positively into place. Things went pretty well at the start.

I’d actually planned to just put it down and press the button, but while the battery was charging I’d  installed the iRobot app on my phone. I discovered that this will connect to the Braava Jet 240. By Bluetooth? WiFi Direct? I don’t know. There was certainly no connection with my home WiFi network.

But connect it did, and you can start the unit using that, as well as set the limited controls. It also gave instructions. As it requested, I put the Braava at the rear left hand point of the area I wanted swept, and pressed the “Clean” button on the app. Off went the Braava.

The Braava determines its mode based on the pad you’ve inserted. There are cut-outs on the mounting panel of each pad that communicate this to the Braava.

It pushed its little dry pad up the length of the kitchen, gently bumping into the kickboard at the other end before turning around and returning on a parallel line, one pad-width over. It returned to a position level with the point from where it had started before turning and heading off again on a new line. When it had covered the whole area, it spent several minutes finding and sweeping all the nooks and crannies of the edges.

Then it started exploring the space behind the starting line. I hadn’t set the virtual wall – you can tell it not to go behind the starting point. Off it headed into the family room, sweeping all over the place. After a while I noticed that it had mounted the rug under the dining table and was working its way hesitantly through the legs of the chairs. At that point, I figured I’d better relieve it, since sweeping a rug rarely does any good.

Just to double check, I returned the unit to the original position, but this time activated the virtual wall mode. Off it went again, this time thoroughly covering the kitchen area up to that line, and no further.

I did say thoroughly covering, rather than thoroughly sweeping. It did a pretty good job, but as we all know from manually sweeping, there’s only so much an 18cm wide brush can hold. As with the Roomba, the more regular the use, the more effective since that reduces the capacity demands.

The pad was fairly grabby, largely pulling together dog’s fur and dust. Having left it unsupervised for a while, I did stumble across a couple of large clump of sweepings which had been caught on bumps and protuberances which the Braava had come across on the room’s perimeter. These clumps had presumably been pulled off the sweeping pad.

Before launching into a wet mode, you should check to make sure that any such clumps or other droppings haven’t been left around.

All that didn’t fully deplete the battery, but I gave it a top up anyway – it only took half an hour to get full again – and then set the Braava loose on my ensuite floor. That was around four square metres in total, and this time I went for the full wet mop. So first it was necessary to fill the reservoir with water. It didn’t take a lot. Perhaps around 100ml. A rubber cap goes on top, but it didn’t make it water tight, so you should keep the Braava upright.

Note: no detergents or other cleaning products are to be used. It’s water only, along with a bit of robotic elbow grease, so there’s a chance that particular dirty spots might not be fully dealt with.

In this mode the Braava follows a different pattern. It squirts out a little water to the floor in front of it, then advances by twenty or thirty centimetres, turning slightly to one side, then it backs up and repeats going straight ahead, then again to the other side. And so it goes across the entire floor. After twenty minutes or so it finished and went back to the starting position, and waited patiently.

The floor was really quite respectably clean. Again, given the lack of detergent, this is better for regular maintenance of a clean floor, than attempting to undertake a long-overdue operation.

The pads can be cleaned off with care. I don’t imagine they’ll last anywhere near as long as the washable ones, but at $12+ each, you’ll want to get as much out of them as possible.

The iRobot Braava Jet 240 is a nifty little floor cleaner, ideal for a bit of maintenance cleaning on hard floor areas. I was more impressed with the wet and damp functions than the sweeping one. But they are also the bigger pains to do manually. I for one would more readily set the Braava to the task every few days than pull out a bucket and mop.