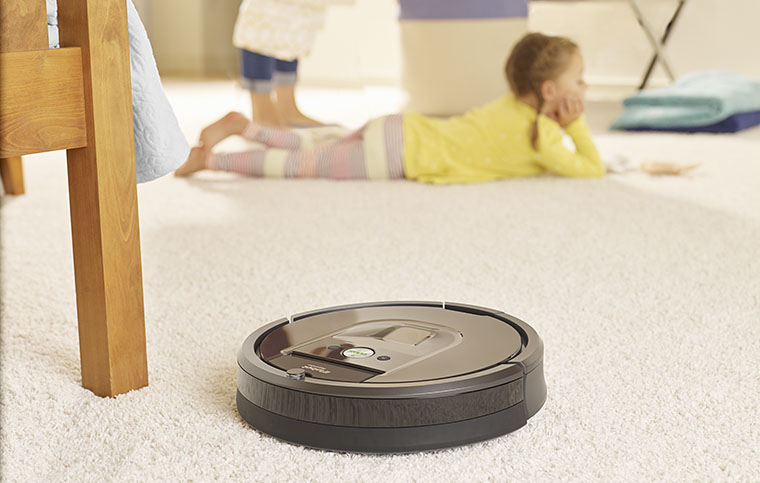 Anything that promises to take the work out of vacuuming has got to be a good thing, right? Right! Not even having to push the vacuum cleaner around is certainly taking out the work. That is, of course, what the iRobot Roomba vacuum cleaner famously offers. But the model 980 is smarter and easier than ever, thanks to network control.

So the iRobot Roomba 980, as we all know, is a self-driving, self-guiding vacuum cleaner. It’s shaped like an oversized hockey puck, the better to glide around under furniture. Looked at from the top, it’s a 345mm diameter circle, standing about 85mm tall on the floor.

Underneath are two largish tractor wheels, powered, and spring loaded so that they can extend up to around 30mm downwards to help climb over small obstacles. They are widely spaced near the circumference. The centre of mass is towards the front, well ahead of them. Right at the front is a freely swinging ball wheel.

The cleaner draws air up from the floor between a couple of soft, ribbed rollers. These are powered and do not appear to quite contact the floor, although they might the reach the top of a deep carpet pile. Their job seems to be to make sure that the material that’s picked up is forcefully conveyed to the removable bin at the rear.

About 45 degrees to the right of straight ahead is a three armed spinning doohickey (iRobot calls it a “side brush”) with long bristles that reach out past the right side of the body in order to sweep debris back under the main body so it can be drawn in by the vacuum.

The front half of the body has a spring-loaded bumper around it. It is in part by means of this that the Roomba detects its environment and knows it must change direction to navigate around an obstacle. The unit can also detect when it has reached a downwards stair and draw back before going over the edge.

On the top is a large “Clean” button by which you fire up the unit and pause it. There are two other buttons: “Home” which tells the unit to go dock itself, and “Spot” which makes the unit do a spiral around the current place with the vacuum power up high, covering a circle around a metre in diameter. Importantly, there’s also a camera on top that looks about 45 degrees upwards. This is the other means by which the Roomba 980 detects its environment, spotting landmarks which it can memorise and then use for future navigation.

The Roomba can also detect any particularly grubby areas that it might encounter, and back up and redo them at higher power (this is called “Dirt Detect”).

It operates at higher intensity on carpet than on hard floors (and this is called “Carpet Boost”).

As the last phase of cleaning any area the unit is programmed to run around all the boundaries with its right side so that the doohickey (sorry, “side brush”) can sweep clean the edges.

Now all this is cool, but the thing also has WiFi built in (2.4GHz only, a little fact it didn’t tell me until after it failed to connect to the 5GHz access point I’d specified). There’s a free app for iOS and Android for controlling the unit and, perhaps more importantly, setting up vacuuming schedules (up to seven a week)

There’s really not much to using the unit. You plug in the docking station (place it against a wall or solid object or the Roomba will knock it askew and fail to dock properly). Put the Roomba in place atop it and press the “Clean” button once to kind of wake it up. Press “Clean” again, and off it goes.

With a full charge, it is supposed to run for a couple of hours on a hard floor. It did a good ninety minutes for me on mixed carpet and wood. This model is also designed to do multiple rooms, finding its way through doorways.

In my house it did just that. I set it going and went out to my office. When I came back a couple of hours later, it was docked and the floor and carpets were clean. I’ve got to say that I enjoyed that.

The tray which captures the dust and dirt and fur that has been vacuumed up is, obviously, not very big. I’d say its total volume is not much bigger than my handheld vacuum. So isn’t this going to be a problem?

Well, yes, of course. The first time you vacuum it may well be if there’s an accumulation of stuff needing to be cleaned up. But you’re not pushing the thing around, so you might as well have the Roomba do its stuff daily, which means soon enough each vacuum will just be a top up. The only thing you’ll need to do is empty the dust tray each day.

On a couple of occasions, while I was still new to it, the Roomba stopped unexpectedly, beeped out an error number and switched itself off. In the first case it had apparently sucked in a small plastic bag which was interfering with operation. The second time its dust tray was full.

Full? Chockablock! I cleaned it out, pulling out a thick mat of dust and fibres which had been folded into it, and reinserted the tray, but the flashing error lights remained in place. It turned out that the whole outlet chute of the main body was also packed with a mat of dust and fibres. So I cleaned those up, clicked out the two rollers that help guide the dirt in and cleaned all of them up, put it back together and upon reinsertion, the Roomba worked perfectly again.

It seemed odd that the unit would so overpack itself. I explored the control app and found the Cleaning Preferences section. One of these was “Finish Cleaning When Bin is Full”. In other words, keep on going regardless! On was the default setting. I’m guessing that the aim is not to overstuff the bin, but to avoid “false positives”, where an odd shaped bit of lint or a brief obstruction might falsely trigger the “bin full” sensor.

The app was pretty neat. I used the Android version on a phone and there was the usual heart-in-mouth moment when the unit wouldn’t connect to my network. (The app records a history of use, so I was later able to discover that even though it was delivered clean and shiny, I was not the first user. So there might have been some carry-over of conflicting data.) A simple reset seemed to sort things out. The app first connects to the Roomba wirelessly, then tells it the information it needs to connect to your network, before switching your phone back to its network connection.

You can give your Roomba a name, using the app, and make some other settings, start it cleaning or pause it, send it home, or set up the aforementioned schedules.

The ability of the unit to find its way around really was pretty impressive, but occasionally it would get make me wince with how stupid it was. Being the sort of person who’s unkind to robots of all kinds, I took it to behind my office desk and told it to go home to its dock. It managed to get itself in a tangle, poking its nose here and there for five minutes before switching off. So I made it easier, putting it three metres away from base, and this time it went for fifteen minutes, nosing here and there and everywhere … except for the 180 degree space which would have led it to the base station. I would have expected a full random walk to have been more successful. I suspect with more practice in my office it would have gotten better with its navigation camera. Most likely it was misidentifying where it was.

I was in the process of writing that “not once did it get stuck during the cleaning of what is at ground level the obstacle course of my office, with cables running hither and thither, nooks and crannies barely larger than the Roomba’s own dimensions” when, of course, it got stuck. It had gotten caught against a microphone stand with the cables underneath compromising its traction. The motor stopped, it emitted a two toned alert, and then in its best English lady voice, announced: “Error 6” and explained that it needed to be moved to a new location. Nice.

For the most part, though, the unit worked with no manual intervention required. And in a normal house that’s reasonably neat it should never get stuck. Especially if you use the two “Dual Mode Virtual Wall Barriers” that come with it. These can keep it away from a circle 1.2 metres in diameter, or from crossing an invisible line. Great for stopping it from bumping into the pet’s water bowl, or passing through a doorway left open. They worked perfectly. Their two AA batteries have a life of eight to ten months.

It works best if you ignore it, or you’re not around. Sometimes it can seem frustrating in the way it searches its way around the room, gently bumping into things. But leave it be and come back a couple of hours later, and you can just enjoy the results.

Speaking of which, the pickup was quite good. Not as good as my ancient Kirby with its spinning brush, but quite good. There can be corners it can’t quite get into. I had expected it to be exceptionally quiet (my only exposure prior to this was in TV show placements), but it turns out that it’s a vacuum cleaner, and thus makes noise. But less noise than most, especially when it’s in the lower mode it uses on hard floors.

Finally, my dog clearly formed the belief that the Roomba was an alien entity intent on doing harm, so the noise it produced was muted somewhat by the infuriated barking that accompanied it. But your dog may not be quite so helpful.

If you have a reasonably neat and orderly home, especially one with a single level, then the iRobot Roomba 980 vacuum cleaning robot could be a great addition. All that will be left for you to do (aside from emptying the bin, and doing the other required maintenance every few months) will be using a hand-held vacuum in the corners it has missed.

Features
7.6
Value for money
7.6
Performance
7.6
Ease of Use
7.6
Design
7.6
Positives
The easy way to do housework, remote control with app, finds its own way home to charge up
Negatives
Somewhat limited bin size, can get confused as to location
7.6