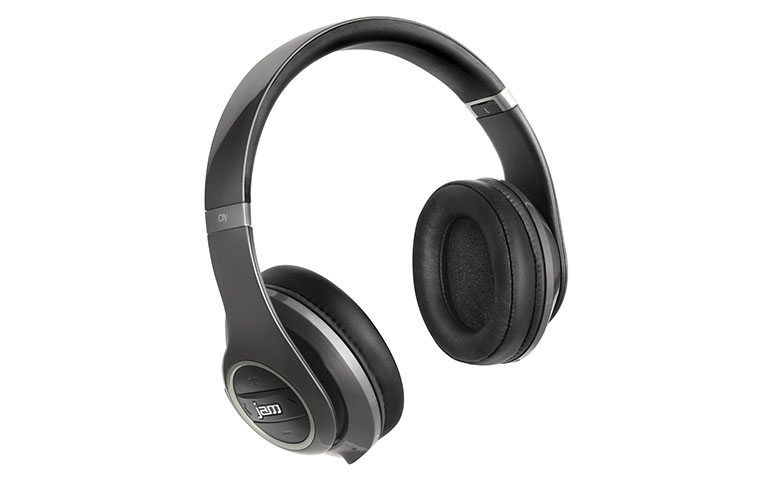 You’ve got to wonder how they do it. Audio gear maker Jam Audio has managed to pack both Bluetooth connectivity and active noise cancelling into a pair of headphones selling for just under $200. So the question is: are they worth it?

These are fairly large over-ear models. That is, when you’re wearing them your entire ears fit within the soft ear cups. But they fold up quite well – old-fashioned Beats style – and can be carried in the soft pouch provided with them. Style wise, they are finished in black plastic with a silvery trim. A spring metal headband may or may not visible within the plastic and padded sheath, depending on whether you have to extend the ear sections. Left and right are clearly marked.

There’s a Micro-B USB charging port on the bottom of the left ear cup. The controls and the input for the 3.5mm audio cable are on the right. The cable need not be connected of course. Indeed, I didn’t use it at all until my perfunctory check when it came to writing this review. All the rest of my listening was via Bluetooth.

The purpose of the analogue cable is for use if the battery runs down. There is no in-line remote on the cable.

The built in batteries are rated to 14 hours of Bluetooth operation. The power switches off automatically after two minutes if the headphones are not connected via Bluetooth to a source device. If they are connected but nothing’s playing, they switch off after fifteen minutes. But that’s only the Bluetooth/amp section. The noise reduction is switched on and off independently and remains on until explicitly switched off.

So you can use them on an airplane to reduce noise without actually listening to anything.

The controls are well laid out and very easy to operate. There are two smaller buttons at the back of the control section: one for Bluetooth (and internal amplifier) power, and the other for noise reduction. That’s kind of important. You can have the noise reduction on even if you’re using the cable.

Also, there’s volume up and down, play/pause (which doubles as answer/pickup) and track skip forwards and reverse. If you hold down a track skip key it fast-forwards or fast-rewinds as appropriate. Control functionality was simply excellent.

The formal model number of these headphones is CMP-HXHP150GYA.

First thing to note was comfort. They were at least as comfortable as any headphones I’ve used, and way more so than typical “on-ear” models. A potential problem is that comfort can be a result of relatively light inwards pressure on the head, which can mean they are insecure. And, yes, the pressure on my head was fairly light.

But, no, they didn’t feel in the least insecure. I found myself – now that the weather here in Canberra has gone cold – able to jog without any sense of discomfort or feeling that they may slip off. And indeed they didn’t. Which is quite the feat, given the excessive ungainliness of my jogging gait.

As for battery life, I really don’t know how long they last. But whatever it was, it was plenty long enough for me. I’d spend two or three hours, sometimes four, with them on my head. Every two or three days I’d start to worry that perhaps they should be topped up, so I’d plug them in. I never ran them down.

But if I did, having the physical cable as a backup would have solved the immediate problem.

Incidentally, you can listen via the cable or by Bluetooth even while the headphones are being charged. I can envisage the usefulness of that on a long haul flight on one of the many aircraft that now have USB sockets for each seat.

The Bluetooth connection was impressively solid. Walking around, it was just a little touchy when the iPod Nano was in my front left pocket, but otherwise it worked extremely well. Last night I returned home in the car and accidentally left the Nano in the car’s centre console. I went into my office out the back, perhaps fifteen metres away, and worked for a while. Then I went into the house to its furthest corner, and only then were there some dropouts to remind me that I didn’t have the Nano with me. The Bluetooth signal had made its way through the car’s door, a brick wall, a kitchen and a couple of internal walls.

There was one scary aspect of these headphones: when the Bluetooth/amp section was switched on or off, or automatically switched itself all, they announced the operation with a V-for-Victory descending tone with a long, deep bass trailing off at the end. It was loud. Very loud.

On a couple of occasions, I’d left the headphones on my head while I was working at the computer after the music had stopped. And then fifteen minutes would pass. Fortunately my heart appears to be in pretty good shape.

The noise reduction was interesting. Active noise reduction works, briefly, by measuring the outside sound, processing it somewhat so that it is similar to what you’d hear of that sound through the ear cups, turning that waveform upside down and feeding it into the sound from the sound transducers. The inverted wave should in theory cancel out the sound that makes its way through the ear cups.

I’ve used quite a few of these over the years, and I’d say that the Jam Transit City headphones has about the least aggressive noise reduction of any of them. It certainly works, and seems to do most of its work in the midrange and lower midrange so, perhaps counterintuitively, you suddenly find you can hear conversations around you more clearly because those higher frequencies aren’t being masked as much any more.

But I’m thinking this is actually pretty good tuning, especially for when you’re on a plane. Most of the noise on an aircraft is indeed in the midrange, and especially the lower midrange (and bass, but that’s less troubling). Cutting even half a dozen decibels from the level of that is very welcome. Combined with the natural noise reduction from the closed-back, over ear design, the external noise reduction was very effective.

As for the sound delivered by the headphones, it was bold and effective, if not particularly subtle. The bass was clearly strong – stronger than is natural – but undistorted and reasonably well extended. Importantly, the treble was not harsh, making for a smooth and comfortable listen. The overall balance was towards the bass because the headphones had been clearly designed for that purpose. Not surprising for street-wear style head gear. I could tell because when connected by cable, the bass wasn’t as strong. So it seems the built in electronics EQ the sound when the amp is running.

The headphones made most podcasts sound better than they actually were, since they tend to be a little light on the bass in the voices, although some close-miked male speakers had their chestiness emphasised somewhat.

Most music also benefited in the sense of engaging listening, even though it wasn’t all that accurate. Live Janice Joplin, Eminem on The Marshall Mathers LP, Muse, all got more engaging thanks to super strong bass lines. Audiophile listening? No way. Fun listening? Pretty much.

So, back to our original question: are the Jam Transit City headphones worth it? For those who want to be out and about, very much so.